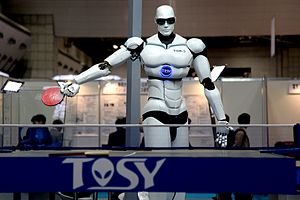 This article is about the future of robotics for civil use.

Soft and squishy robots: phase-change materials could allow even low-cost robots to switch between hard and soft states.[4] Flexible machining robot: foamed polystyrene materials would cut the cost of the industrial robots.[citation needed]

Today's market is not fully mature. One or more software compatibility layers have yet to emerge to allow the development of a rich robotics ecosystem (similar to today's personal computers one). The most commonly used software in the robotics research are free software solutions such as Player/Stage or cross-platform technologies such as URBI. Microsoft is currently working in this direction with its new proprietary software Microsoft Robotics Studio. The use of open source tools helps in continued improvement of the tools and algorithms for robotic research from the point one team leaves it.

Developments related to robotics from the Japan NISTEP [11] 2030 report :

According to research commissioned by the UK Office of Science and Innovation's Horizon Scanning Centre,[14] robots could one day demand the same citizen's rights as humans. The study also warns that the rise of robots could put a strain on resources and the environment.