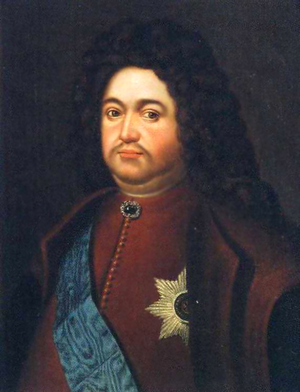 Count Feodor Alekseyevich Golovin (Фёдор Алексеевич Головин) (1650 – 10 Aug [O.S. 30 July] 1706) was the last Russian boyar and the first Russian chancellor, field marshal, general admiral (1700). Until his death he was the most influential of Peter the Great's associates.

Golovin stemmed from the family of Russian treasurers of Byzantine Greek descent. During the regency of Sophia Alekseyevna, sister of Peter the Great, he was sent to the Amur to defend the new fortress of Albazin against the Chinese Qing Empire. In 1689, he concluded with the Qing Empire the Treaty of Nerchinsk, by which the line of the Amur, as far as its tributary the Gorbitsa, was retroceded to China because of the impossibility of seriously defending it. In Peter's Grand Embassy to the West in 1697 Golovin occupied the second place immediately after Franz Lefort. It was his chief duty to hire foreign sailors and obtain everything necessary for the construction and complete equipment of a fleet. On Leforts death, in March 1699, he succeeded him as Field Marshal. The same year he was created the first Russian count, and was also the first to be decorated with the newly instituted Russian Order of St. Andrew.

The conduct of foreign affairs was at the same time entrusted to him, and from 1699 to his death he was the premier minister of the tsar. Golovin's first achievement as foreign minister was to supplement the Treaty of Karlowitz, by which peace with the Ottoman Empire had only been secured for three years, by concluding with the Porte a new treaty at Constantinople (June 13, 1700), by which the term of the peace was extended to thirty years and, besides other concessions, the Azov district and a strip of territory extending thence to Kuban were ceded to Russia. He also controlled, with consummate ability, the operations of the brand new Russian diplomats at the various foreign courts. His superiority over all his Russian contemporaries was because he was already a statesman, in the modern sense, while they were still learning the elements of statesmanship. His death was an irreparable loss to the Tsar, who wrote the words upon the despatch announcing it in grief.