Günther Korten (26 July 1898 – 22 July 1944) was a German Colonel General and Chief of the General Staff of the Luftwaffe in World War II. He died from injuries suffered in the assassination attempt on Adolf Hitler in July 1944.

Korten was born in Cologne as a son of the architect Hugo Korten (1855–1931) and his wife Marie Korten (1866–1942). At the beginning of World War I he was a cadet in the Prussian army. He served through the war in an engineering battalion. He continued his military career after the war in the Engineers, until he was selected in 1928 to participate in the secret pilot training programme in the Soviet Union. On returning to Weimar Germany he joined the "Bildstelle Berlin".

When the Third Reich started on its rearmament programme, Korten, by then a captain, formally joined the Luftwaffe in 1934. He received training as a general staff officer and served for several years in the Air Ministry. He was a Colonel and Chief of the General Staff of Luftflotte 4 (4th Air Fleet) stationed in Austria.

At the beginning of 1940, Korten was transferred to the general staff of the Luftflotte 3 (3rd Air Fleet), in which he served during the Battle of France and in the Battle of Britain. On 19 July he was promoted to Major-General. In January 1941 he transferred back to the 4th Air Fleet, in order to participate in the Balkans Campaign and in the assault on the Soviet Union (Operation Barbarossa). In August 1942 he was promoted to Lieutenant-General and took over the command over the I. Fliegerkorps, which fought at the southern sector of the Eastern Front and was temporarily transferred to the "Luftwaffenkommando Don" during the Battle of Stalingrad.

At the beginning of 1943 Korten was promoted to General and in the summer replaced Alfred Keller at Luftflotte 1 (1st Air Fleet). A few weeks later, on 25 August he accepted the position of General Chief of Staff of the Luftwaffe, after the former Chief of Staff Hans Jeschonnek committed suicide. 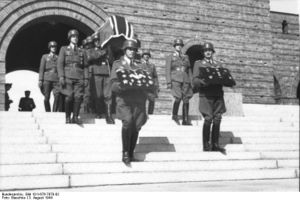 Korten was mortally wounded in the Wolfsschanze near Rastenburg during the July 20 Plot in 1944, in which Colonel Claus Schenk Graf von Stauffenberg attempted to assassinate Hitler with a bomb. Two days after the assassination attempt he succumbed to his injuries in the military hospital attached to the Führer's headquarters. Like the other military victims Rudolf Schmundt and Heinz Brandt he was posthumously promoted, in his case to Colonel-General.

Originally, Korten was buried in the Tannenberg Memorial.[1] When the Russians arrived, his body was exhumed and buried in the Friedhof Bergstraße cemetery in Steglitz, Berlin. The grave is still existing.

In the 2004 German production, Stauffenberg, Korten is portrayed by actor Hans Sternberger.