Lieutenant-General Günther Rall (10 March 1918 – 4 October 2009) was the third most successful fighter ace in history. He achieved a total of 275 victories during World War II: 272 on the Eastern Front, of which 241 were against Soviet fighters. He flew a total of 621 combat missions, was shot down eight times[2] and was wounded three times. He fought 1940 in the Battle of France, the Battle of Britain, 1941 in the Balkan Campaign and over Crete. He began the conflict as a young Second Lieutenant, and was a Major and Geschwaderkommodore of JG 300 at the surrender. [3] He claimed all of his victories in the Messerschmitt Bf 109.

He was born in Gaggenau, a small town in the Schwarzwald (Blackforest) region in Germany, as a son of a businessman. He joined the Wehrmacht and became a Fähnrich (officer candidate) on 4 December 1936. He entered the War College in Dresden, where he was influenced by one of his best friends to join the Luftwaffe. He qualified as a pilot on 1 July 1938 and was posted to Jagdgeschwader 52 (JG 52—52nd Fighter Wing), with the rank of Leutnant (second lieutenant).

Rall first saw combat during the Battle of France, and on 12 May 1940, he scored his first victory. Three French Curtiss H75-C1 (P-36 Hawk) fighters were attacking a German reconnaissance aircraft at a height of 26,000 feet. Rall "bounced" them and shot down one. He later said:

I was lucky in my first dogfight, but it did give me a hell of a lot of self-confidence... and a scaring, because I was also hit by many bullets.[4]

On 18 May, he shot down another H75 piloted by Czech pilot Otto Hanzlicek of GC II/5, who survived the engagement.[5]

Later JG 52 was moved to Calais where it took part in the Battle of Britain. Due to heavy losses in the unit, he was given command as a Staffelkapitän of 8./JG 52[6][Note 1] on 25 July 1940 and was promoted to Oberleutnant a week later, on 1 August 1940. He fought with JG 52 over Britain until the unit was withdrawn to replace losses.

Battles of Yugoslavia and Greece

Rall then took part in the Balkans Campaign in the spring of 1941. He also partook in Operation Merkur, the airborne invasion and subsequent Battle of Crete in June 1941. After the successful conclusion of Merkur, JG 52 was transferred back to Romania to help defend the oil fields there from Soviet bombers.[7] 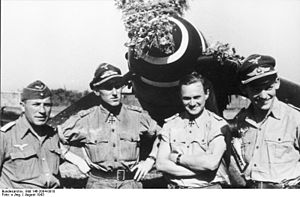 Günther Rall after his 200th aerial victory. Walter Krupinski standing to his left.

During Operation Barbarossa, Rall found repeated opportunity for combat, scoring his third, fourth and fifth victories in three days of June 1941. During a five-day period, Rall and his Staffel destroyed some 50 Soviet aircraft. He had 12 victories in October. JG 52 was then attached to the operations of Heeresgruppe Süd and continued operating on the southern flank of the Eastern Front.

On 28 November 1941 Rall shot down his 37th victim, but was himself shot down. He tried to fly to the German lines with a badly damaged engine, but he crash landed and was knocked out. A German tank crew rescued him from the wreck. X-rays revealed he had broken his back in three places. Doctors told Rall he was finished as a pilot and transferred him to a hospital in Vienna in December 1941. Despite the diagnosis, which said he would not be able to walk again, Rall defied the odds and returned to combat almost a year later. During his treatment he met a Dr. Hertha Schön, whom he later married in 1943.[8] 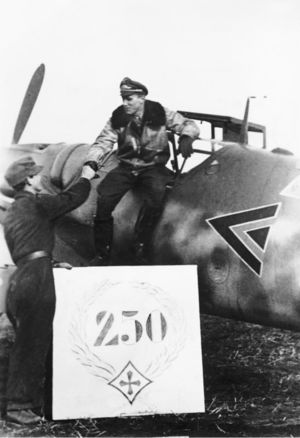 He was appointed Gruppenkommandeur of III./JG 52 on 6 July 1943. On 7 August 1943 he logged his 150th victory, with his 200th coming near the end of September, for which he was awarded the Schwerter to his Ritterkreuz. In October 1943, Rall had his best month, downing 40 aircraft. A month later, he became only the second pilot (after Walter Nowotny) to achieve 250 kills. During 1943, Rall was credited with 151 enemy aircraft destroyed, a figure exceeded only by Nowotny (196) and Hermann Graf (160).[citation needed] On 1 November 1943, Rall was promoted to major, a rank he retained until the end of the war.

On 19 April 1944, Rall was transferred to Jagdgeschwader 11 (JG 11), where he took up position as Gruppenkommandeur of II./JG 11. JG 11 was tasked with Reichsverteidigung (Defence of the Reich) and Rall led his unit against the bomber fleets of Eighth Air Force. On 12 May 1944, Rall was leading a Staffel of Bf 109s and bounced a flight of three P-47 Thunderbolts led by Col. Hubert Zemke, with Rall shooting down two Thunderbolts. His own squadron were then bounced by other P-47s arriving at the engagement, and he was shot down by pilots of the 56th Fighter Group. Rall had his left thumb shot off and was hospitalized for many months because of the onset of infections.

Rall became an instructor, and studied several American planes that had fallen into the possession of the Luftwaffe to find their strengths and weaknesses to find better strategies to teach his students. He flew the P-51 and was amazed at the luxury and quality of the American planes. He found they were spacious, heated, had armoured plate protection, and used materials and equipment that had been long unavailable to Germany. He explained that being unable to fly in combat probably saved his life at a time when Germany was totally outnumbered and the chances of staying alive were drastically dropping. However, he returned to active duty in November.[13]

His last posting was with Jagdgeschwader 300 (JG 300), operating from a variety of airfields in southern Germany during the last months of the war. Lack of supplies prevented most planes from going on missions, and the fast progress of the Allies forced his squadron to move several times and it is unlikely that he saw much combat action during this period.[citation needed] Towards the very last days of the war he asked the men in his command to try to stay alive rather than carry out senseless actions. He felt it was his responsibility as a leader to try to save the few lives that he could as the war was virtually over and its outcome could not be reversed. He was taken prisoner by American forces after the fighting in Germany ended.[citation needed]

In my experience, the Royal Air Force pilot was the most aggressive and capable fighter pilot during the Second World War. This is nothing against the Americans, because they came in late and in such large numbers that we don't have an accurate comparison. We were totally outnumbered when the Americans engaged, whereas at the time of the Battle of Britain the fight was more even and you could compare. The British were extremely good.[10] 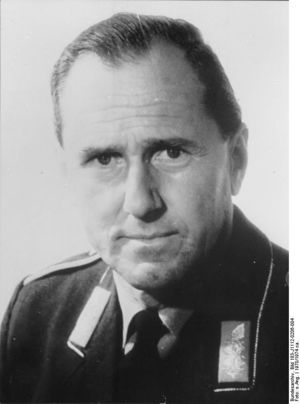 Whilst in a prisoner of war camp near Heidelberg, Rall was approached by the Americans who were gathering Luftwaffe pilots who had experience with the Messerschmitt Me 262 fighter. Rall was transferred to Bovingdon near Hemel Hempstead. Rall was then based at RAF Tangmere, where he met the RAF ace Robert Stanford Tuck, with whom he reportedly became close friends.[14]

Returning to postwar Germany, he was unable to find work. Rall started a small wood cutting business in the forest. He eventually joined Siemens as a representative, leaving in 1953.[citation needed] Rall rejoined the newly established West German military in 1956, after meeting a wartime friend and Luftwaffe pilot who encouraged him to return to flying. He joined the new Luftwaffe der Bundeswehr. One of his tasks was to oversee modifications to the F-104 fighter to comply with the requirement of the Bundeswehr, leading to the F-104G version. He insisted on the replacement of the ejection seat due to safety concerns.[15]

His enforced retirement in 1975 was as a result of a controversial three-week visit to South Africa where he hosted meetings with South African politicians, of which his Air Force superiors claimed to be unaware. The "private" nature of this visit was later publicised by German weekly magazine Stern. South Africa, despite its apartheid regime, was seen as strategically important to NATO and although the visit was thought to be officially sanctioned, the political embarrassment following the concerted press campaign meant Defence Minister Georg Leber was forced to retire Rall in October 1975.[16]

By the end of his career he attained the rank of Generalleutnant. In 2004 he wrote his memoir, Mein Flugbuch ("My Logbook"). Rall was interviewed in documentaries such as Thames Television's The World at War, and was a contributor to the Wings documentary television series produced by the Discovery Channel.

Rall died at his home in Bad Reichenhall on 4 October 2009, aged 91, after suffering a heart attack two days earlier. 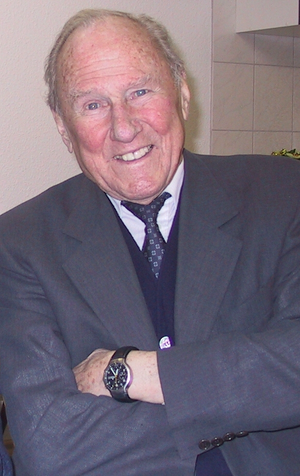