Günther Adolf Ferdinand “Hans” von Kluge (30 October 1882 – 19 August 1944) was a German Field Marshal who served in World War I and World War II. Born into a Prussian military family in Posen (now Poznań, Poland) in 1882, Kluge was a staff officer with the rank of captain by 1916 at the Battle of Verdun. He ultimately rose to the rank of field marshal in the Wehrmacht, which was conveyed at the 1940 Field Marshal Ceremony. The well-known Generalleutnant Wolfgang von Kluge was his younger brother, and another German officer and active resistance fighter against the Nazi régime, Oberstleutnant Karl Ernst Rahtgens, was his nephew.

Kluge campaigned on the Eastern and Western Fronts, and was awarded the Knight's Cross of the Iron Cross with Oak Leaves and Swords (German: Ritterkreuz des Eisernen Kreuzes mit Eichenlaub und Schwertern).[N 1] Although Kluge was not an active conspirator in the 20 July plot to assassinate Adolf Hitler, his nephew was. But Kluge himself was previously involved with the German military resistance, and had become convinced at the Eastern Front that Hitler was mad. He committed suicide on 19 August 1944, after having been recalled to Berlin for a meeting with Hitler in the aftermath of the failed coup. He was replaced by Field Marshal Walter Model. His suicide opened the eyes of Gestapo and SS to find traitors also among the high-ranked officers at the Western Front, such as Generalleutnant Hans Speidel and Field Marshal Erwin Rommel.

During the First World War, Kluge was a staff officer, and in 1916 he was at the Battle of Verdun. Remaining in the Reichswehr after the war, by 1936 he was a lieutenant-general, and in 1937 he took command of the Sixth Army.

Invasion of Poland and France

As commander of the Sixth Army Group, which became the German Fourth Army, Kluge led the Sixth into battle in Poland in 1939. He had a central role in the death sentences for twenty-eight Polish prisoners taken in the Defense of the Polish Post Office in Danzig. Though he opposed the initial German plan to attack westwards into France, he led the Fourth Army in its attack through the Ardennes that culminated in the fall of France. Kluge was promoted to field marshal in July 1940. 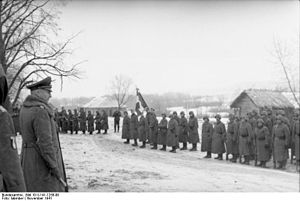 Kluge commanded the Fourth Army at the opening of Operation Barbarossa, where he developed a strained relationship with Heinz Guderian over tactical issues in the advance, accusing Guderian of frequent disobedience of his orders. On June 29 Kluge ordered that, ‘Women in uniform are to be shot.’[1]

After Fedor von Bock was relieved of his command of Army Group Center in late 1941, Kluge was promoted and led that army group until he was injured in October 1943. Kluge frequently rode in an airplane to inspect the divisions under his command and sometimes relieved his boredom during the flights by hunting foxes from the air[2]—a decidedly non-traditional method. On October 30, 1942, Kluge was the beneficiary of an enormous bribe from Hitler who mailed a letter of good wishes together with a huge cheque made out to him from the German treasury and a promise that whatever improving his estate might cost could be billed out to the German treasury.[3] Kluge took the money, but after receiving severe criticism from his Chief of Staff, Henning von Tresckow who upbraided him for his corruption, he agreed to meet Carl Friedrich Goerdeler in November 1942.[4] Kluge promised Goerdeler that he would arrest Hitler the next time he came to the Eastern Front, but then receiving another "gift" from Hitler, changed his mind and decided to stay loyal.[5] Hitler, who seems to have heard that Kluge was dissatisfied with his leadership regarded his "gifts" as entitling him to Kluge's total loyalty.[5] On October 27, 1943, Kluge was badly injured when his car overturned on the Minsk–Smolensk road. He was unable to return to duty until July 1944. After his recovery he became commander of the German forces in the West (Oberbefehlshaber West) as Gerd von Rundstedt’s replacement.

France and the Western Front

Between June and July 1944, during the invasion of Normandy by Allied forces, Rommel commanded Army Group B under Field Marshal von Rundstedt. Rommel was charged with planning German counterattacks intended to drive the Allied forces back to the beaches. On July 5, Kluge replaced Rundstedt, because Rundstedt was advocating negotiation with the Allies. Two weeks later, Rommel was wounded and Kluge took over as commander of Army Group B as well, where Kluge's forces around the town of Falaise were encircled by combined U.S., Canadian, British, and Polish armies.

In August, after the failed coup attempt by Stauffenberg, Kluge was recalled to Berlin and replaced by Model.

A leading figure of the German military resistance, Henning von Tresckow, served as his Chief of Staff of Army Group Centre. Kluge was somewhat involved in the military resistance. He knew about Tresckow’s plan to shoot Hitler during a visit to Army Group Centre, having been informed by his former subordinate, Georg von Boeselager, who was now serving under Tresckow. At the last moment, Kluge aborted Tresckow's plan. Boeselager later speculated that because Heinrich Himmler had decided not to accompany Hitler, Kluge feared that without eliminating Himmler too, it could lead to a civil war between the SS and the Wehrmacht.[6]

When Stauffenberg attempted to assassinate Hitler on July 20, Kluge was Oberbefehlshaber West ("Supreme Field Commander West") with his headquarters in La Roche-Guyon. The commander of the occupation troops of France, General Carl-Heinrich von Stülpnagel, and his colleague Colonel Cäsar von Hofacker – a cousin of Stauffenberg – came to visit Kluge. Stülpnagel had just ordered the arrest of the SS units in Paris. Kluge had already learned that Hitler had survived the assassination attempt and refused to provide any support. "Ja – wenn das Schwein tot wäre!" ("Yes – if the pig were dead!)" he said.[7] On August 17, he was replaced by Walter Model and recalled to Berlin for a meeting with Hitler after the coup failed; thinking that Hitler would punish him as a conspirator, he committed suicide by taking cyanide near Metz two days later on the 19th August. He left Hitler a letter in which he advised him to make peace, and to show "the greatness that will be needed to put an end to a hopeless struggle." Hitler reportedly handed the letter to Alfred Jodl and commented that "There are strong reasons to suspect that had not Kluge committed suicide he would have been arrested anyway."[8] SS officer Jürgen Stroop boasted of his involvement in investigating von Kluge for involvement in the plot. He claimed to have offered the Field Marshal the opportunity to commit suicide, but that Kluge refused. He then claimed to have personally shot him and that Himmler had ordered him to announce that Kluge had committed suicide.[9]

Kluge's nickname among the troops and his fellow officers was der kluge Hans ("Clever Hans"). This nickname was acquired early in his career, partly in admiration of his cleverness and partly as a pun on his name (klug is German for "clever"). The "Hans" component came not from any of his given names but from Clever Hans, a horse which became famous for its apparent ability to do arithmetic.