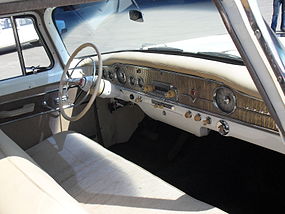 A Chaika (Russian: Ча́йка), which means gull, is a luxury automobile from the Soviet Union made by GAZ. The vehicle is one step down from the ZIL limousine.

RAF in Riga produced the GAZ 13A Universal, an estate, in the 1960s in Riga; this was also built as the GAZ 13C ambulance, as well as a hearse.[5] Produced for a few years in the 1960s, it is the lowest-volume Chaika variant. Small numbers were also built for Mosfilm.[6] As a limousine-class car, Chaikas were available only to the Soviet government, and could not be purchased by average citizens. However, citizens were allowed to rent Chaikas for weddings. Chaikas were used by Soviet ambassadors and Communist Party First Secretaries in East Germany, Korea, Bulgaria, Hungary, Mongolia, and Finland, among others; Fidel Castro was given one by General Secretary Nikita Khrushchev, who himself preferred the Chaika to his ZIL,[7] and kept one at his summer dacha. For their larger size and more powerful V8, Chaikas were also ordered in some quantity by the KGB. Top speed was 99 mph (159 km/h).[citation needed]

Around a hundred M14s were built each year, with total production (including those out of spares in 1989) reaching 1,114.[18] On orders from Mikhail Gorbachev, the blueprints and tooling were destroyed as part of his "fighting privileges" campaign under perestroika.[19]