GM-AvtoVAZ is a joint venture in Russia between General Motors and AvtoVAZ set up in 2001 and began producing the Chevrolet Niva, based on the Lada Niva, at its factory in Tolyatti from 2002.

Voice of America report, showing operations inside the plant and an interview with a representative from GM Russia. 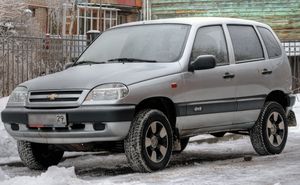 In 2004 the joint venture briefly produced the Chevrolet Viva, based on the 1998 Opel Astra saloon, but after low sales of only 5,000 the model was dropped.[2]

The joint venture reached difficulties and production stoppages for a fortnight in February 2006 when AvtoVAZ was taken over by Rosoboronexport, the Russian state-owned arms-export agency, and a disagreement between the new owners and GM lead to stoppages of the supply of engines and other components.[2]