From Infogalactic: the planetary knowledge core
Jump to: navigation, search
This name uses Eastern Slavic naming customs; the patronymic is Sergeyevna and the family name is Ulanova.

Galína Sergéyevna Ulánova (Russian: Гали́на Серге́евна Ула́нова, 8 January 1910 [O.S. 26 December 1909]  – 21 March 1998) was a Russian ballet dancer. She is frequently cited as being one of the greatest ballerinas of the 20th century. 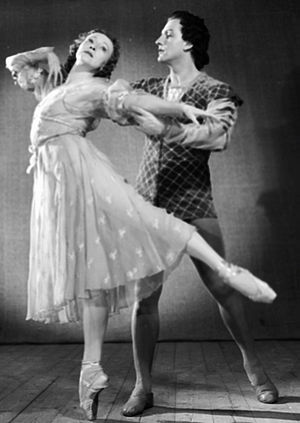 Galina Ulanova and Yuri Zhdanov in the Romeo and Juliet ballet

Ulanova was born in Saint Petersburg, Russia, where she studied under Agrippina Vaganova and her own mother, a ballerina of the Imperial Russian Ballet. When she joined the Mariinsky Theatre in 1928, the press found in her "much of Semyonova's style, grace, the same exceptional plasticity and a sort of captivating modesty in her gestures".[1] They say that Konstantin Stanislavsky, fascinated with her acting style, implored her to take part in his stage productions. In 1944, when her fame reached Joseph Stalin, he had her transferred to the Bolshoi Theatre, where she would be the prima ballerina assoluta for 16 years. The following year, she danced the title role in the world premiere of Sergei Prokofiev's Cinderella.

Ulanova was a great actress as well as dancer, and when she was finally allowed to tour abroad at the age of 46, enraptured British papers wrote that "Galina Ulanova in London knew the greatest triumph of any individual dancer since Anna Pavlova". Having retired from the stage at the age of 50, she coached many generations of the Russian dancers.

Ulanova was the only dancer to be awarded Hero of Socialist Labour, and she was also awarded the highest exclusively artistic national title, People's Artist of the USSR.[2] She was awarded the Stalin Prizes in 1941, 1946, 1947, 1950, and Lenin Prize 1957. She was elected a Foreign Honorary Member of the American Academy of Arts and Sciences in 1960.[3]

She died in 1998 in Moscow, aged 88, and is buried in the cemetery of the Novodevichy Convent.[4]

Ulanova's apartment in one of the Moscow's Seven Sisters (Moscow), the Kotelnicheskaya Embankment Building is preserved now as a memorial museum. Monuments to Ulanova were erected in Saint Petersburg and Stockholm. 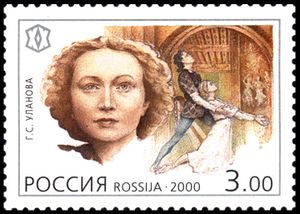 Translated from the Russian Wikipedia article