Ganesh Chaturthi (also known as Vināyaka Caturthi, Gaṇēśa Caturthī or Vināyaka Cavithi ) is the Hindu festival celebrated in honour of the elephant-headed god, Ganesha. Celebrations are traditionally held on the fourth day of the first fortnight (Shukla Chaturthi) in the month of Bhaadrapada in the Hindu calendar, usually August or September in the Gregorian calendar. The festival generally lasts ten days, ending on the fourteenth day of the fortnight (Anant Chaturdashi).

The festival is celebrated in public and at home. The public celebration involves installing clay images of Ganesha in public pandals (temporary shrines) and group worship. At home, an appropriately-sized clay image is installed and worshiped with family and friends. At the end of the festival, the idols are immersed (and dissolve) in a body of water such as a lake or pond.

It is celebrated throughout India, particularly in Maharashtra, Karnataka, Telangana, Tamil Nadu, Kerala, Andhra Pradesh, Goa,[1] Odisha and other parts of western[2] and southern India.[3] Abroad, Ganesh Chaturthi is observed in the Terai region of Nepal and by the Hindu diaspora in the United States, Canada and Mauritius.[4] 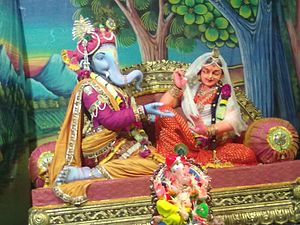 The festival begins with the selection and installation of a clay murti (idol). At home, families decorate a small, clean corner with flowers and other colourful items before installing the idol. Public preparations begin weeks in advance with temporary structures (such as mandapas and pandals) funded by contributions from local residents and businesses. When the idol is installed, it and its shrine are decorated with flowers and other materials.

In preparation for the festival, artisans create clay models of Ganesha for sale. The idols range in size from 3⁄4 inch (1.9 cm) for homes to over 70 ft (21 m) for large community celebrations.[5]

In the consecration ceremony, a priest performs a Prana Pratishtha to invite Ganesha into the idol. This is followed by the 16-step Shodashopachara ritual,[6] (Sanskrit: Shodash, 16; Upachara, process) during which coconut, jaggery, modaks, durva (grass) and red flowers are offered to the murti. Throughout the ceremony, hymns from the Rigveda, the Ganapati Atharvashirsa, the Upanishads, and the Ganesha stotra (prayer) from the Narada Purana are chanted. Aartis are performed with friends and family, typically in the morning and evening.

Artist at work in Margao, Goa 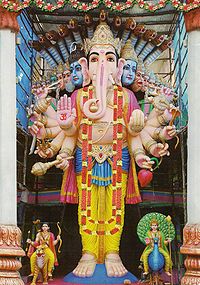 In India, Ganesh Chaturthi is primarily celebrated at home and in public by local community groups in the western states of Maharashtra and Goa and the southern states of Karnataka, Andhra Pradesh, Telangana, Tamil Nadu and Kerala.

In homes, families install small clay statues for worship during the festival. The idol is worshiped in the morning and evening with offerings of flowers, durva, karanji and modaks.[7][8] The worship ends with the singing of an aarti in honour of Ganesha, other gods and saints. In Maharashtra the Marathi aarti "Sukhakarta Dukhaharta", composed by Samarth Ramdas in the 17th century, is sung.[9]

In Goa, Ganesh Chaturthi is known as Chavath in Konkani and Parab or Parva ("auspicious celebration");[10] it begins on the third day of the lunar month of Bhadrapada. On this day Parvati and Shiva are worshiped by women, who fast.[1] Instruments such as ghumots, cymbals and pakhavajs are played during the ceremonies.[11] The harvest festival, Navyachi Pancham, is celebrated the next day; freshly-harvested paddy is brought home from the fields (or temples) and a puja is conducted. Communities who ordinarily eat seafood refrain from doing so during the festival.[1]

In Karnataka the Gowri festival precedes Ganesh Chaturthi, and people across the state wish each other well. In Andhra Pradesh, Ganesha idols of clay (Matti Vinayakudu) and turmeric (Siddhi Vinayakudu) are usually worshiped at home with plaster of Paris idols. In Tamil Nadu the festival, also known as Vinayaka Chaturthi or Pillayar Chaturthi, falls on the fourth day after the new moon in the month of Āvaṇi in the Tamil calendar. The idols are usually made of clay or papier-mâché, since plaster of Paris idols have been banned by the state government.[citation needed]. Idols are also made of coconuts and other organic products. They are worshiped for several days in pandals, and immersed in the Bay of Bengal the following Sunday. In Kerala the festival is also known as Lamboodhara Piranalu, which falls in the month of Chingam.[12] In Thiruvananthapuram a procession marches from the Pazhavangadi Ganapathi Temple to Shankumugham Beach, with tall statues of Ganesha made from organic items and milk immersed in the sea.[13]

Family traditions differ about when to end the celebration. Domestic celebrations end after 1, ​1 1⁄2, 3, 5, 7 or 11 days, when the idol is brought to a body of water (such as a lake, river or the sea) for immersion. Due to environmental concerns, a number of families now avoid bodies of water and let the clay statue dissolve in a container of water at home. After a few days, the clay is used in the home garden. In some cities a public, eco-friendly process is used for the immersion.[14]

Public celebrations of the festival are popular, and are organised by local youth groups, neighborhood associations or groups of tradespeople. Funds for the public festival are collected from members of the association arranging the celebration, local residents and businesses.[15] The Ganesha idols and accompanying statues are installed in temporary shelters, known as mandaps or pandals. The festival features cultural activities such as singing, theater and orchestral performances and community activities such as free medical checkups, blood-donation sites and donations to the poor. Ganesh Chaturthi, in addition to its religious aspects, is an important economic activity in Mumbai, Pune, Hyderabad, Bangalore and Chennai. Many artists, industries, and businesses earn a significant amount of their living from the festival, which is a stage for budding artists. Members of other religions also participate in the celebration.[16][17][18]

Ganesh Chaturthi is celebrated in the UK by the migrant Hindu population and the large number of Indians living there. The Hindu Culture and Heritage Society, a Southall-based organisation, celebrated Ganesh Chaturthi for the first time in London in 2005 at the Vishwa Hindu Temple; the idol was immersed in the River Thames at Putney Pier. Another celebration, organised by a Gujarati group, has been celebrated in Southend-on-Sea and attracted an estimated 18,000 devotees.[19] Annual celebrations are also held on the River Mersey in Liverpool.[20][21]

The Philadelphia Ganesh Festival is one of the most popular celebrations of Ganesh Chaturthi in North America,[22] and it is also celebrated in Canada, Mauritius, Malaysia and Singapore. The Mauritius festival dates back to 1896,[citation needed] and the Mauritian government has made it a public holiday.[23] In Malaysia and Singapore, the festival is more commonly known as Vinayagar Chaturthi because of the large Tamil-speaking Hindu minority.[24]

The primary sweet dish during the festival is modak (modak in Marathi and Konkani, modakam or kudumu in Telugu, modaka or kadubu in Kannada, kozhakatta or modakkam in Malayalam and kozhukattai or modagam in Tamil). A modak is a dumpling made from rice or wheat flour, stuffed with grated coconut, jaggery, dried fruits and other condiments and steamed or fried. Another popular sweet dish is the karanji (karjikai in Kannada), similar to modak in composition and taste but in a semicircular shape.This sweet meat is called Nevri in Goa and is synonymous with Ganesh festival amongst the Goans and the Konkani diaspora.[25]

In Andhra Pradesh and Kerala modak, laddu, vundrallu (steamed, coarsely-ground rice-flour balls), panakam (a jaggery-, black pepper- and cardamom-flavored drink), vadapappu (soaked moong lentils) and chalividi (a cooked rice flour and jaggery mixture) are offered to Ganesha. These offerings are known as naivedya, and a plate of modak traditionally holds 21 pieces of the sweet. In Goa, modak and a Goan version of idli (sanna) is popular.[26] 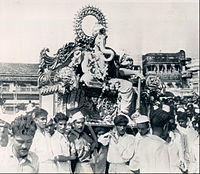 Although it is unknown when (or how) Ganesh Chaturthi was first observed,[27] the festival has been publicly celebrated in Pune since the era of Shivaji (1630–1680, founder of the Maratha Empire).[27] The Peshwas (hereditary administrators of the empire from 1718 until its end in 1818) encouraged the celebrations in their capital, Pune, since Ganesha was their family god (Kuladevata).[27] With the fall of the Peshwas, the Ganesha festival lost state patronage and became a private family celebration in Maharashtra until its revival by Indian freedom fighter and social reformer Lokmanya Tilak.[27]

The current Maharashtra public festival was introduced in 1892 by Bhausaheb Laxman Javale, who installed the first sarvajanik (public) Ganesha idol after he met with Balasaheb Natu and Krishnajipant Khasgiwale at his home. When he visited the Maratha-ruled state of Gwalior, Khasgiwale saw the traditional public celebration and brought it to the attention of his friends in Pune.[28] In 1893 Tilak praised the celebration of sarvajanik Ganesha utsav in his newspaper, Kesari, and the following year he installed a Ganesha idol in the Kesari office; his efforts transformed the annual domestic festival into a large, well-organised public event.[29] Tilak recognized Ganesha's appeal as "the god for everybody",[30][31] popularising Ganesh Chaturthi as a national festival to "bridge the gap between Brahmins and 'non-Brahmins' and find a context in which to build a new grassroots unity between them", generating nationalistic fervour in the Maharashtran people to oppose British colonial rule.[32][33] He was the first to install large public images of Ganesha in pavilions, and established the practise of submerging the idols in rivers, the sea or other bodies of water on the tenth day of the festival.[34]

Encouraged by Tilak, Ganesh Chaturthi facilitated community participation and involvement in the forms of intellectual discourse, poetry recitals, plays, concerts, and folk dances. It was a meeting ground for people from all castes and communities at a time when the British discouraged social and political gatherings to control the population.[35]

In Goa, Ganesh Chaturthi predates the Kadamba era. The Goa Inquisition had banned Hindu festivals, and Hindus who did not convert to Christianity were severely restricted. However, Hindu Goans continued to practice their religion despite the restrictions. Many families worship Ganesha in the form of patri (leaves used for worshiping Ganesha or other gods), a picture drawn on paper or small silver idols. In some households Ganesha idols are hidden, a feature unique to Ganesh Chaturthi in Goa due to a ban on clay Ganesha idols and festivals by the Jesuits as part of the Inquisition.[36] Unlike the Maharashtra festival, Ganesh Chaturthi is more of a family affair; gatherings of 1,000 or more celebrate the festival in their ancestral homes.[37] 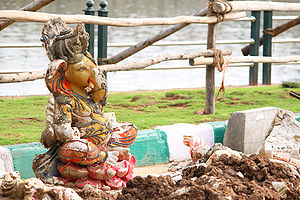 Ganesha idol after immersion in a lake 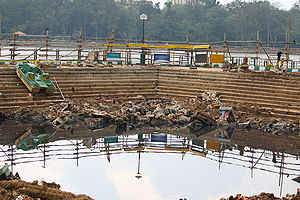 The most serious impact of the festival on the environment is due to the immersion of plaster-of-Paris idols in bodies of water. Traditionally, idols were sculpted from mud taken from nearby bodies of water; after the festival they were returned to their source, a cycle meant to represent the natural cycle of creation and dissolution.

As the commercial production of Ganesha idols increased, earthen or "natural" clay (shaadu maati in Marathi and banka matti in Telugu) was replaced by plaster of Paris. Although the man-made plaster is easier to mould, lighter and less expensive than clay, it is non-biodegradable (insoluble in water). The paint used to decorate the plaster idols contains heavy metals such as mercury and cadmium, which pollute the water. In addition, the non-biodegradable accessories adorning the idol accumulate in beach sand.

In Trinidad and Tobago (where Ganesh Chaturthi is widely celebrated), Radio Jaagriti has educated the public on the environmental implications of plaster-of-Paris models and clay idols of Ganesha have been encouraged for immersion to prevent environmental damage. In Goa the sale of plaster-of Paris Ganesha idols has been banned by the state government, and celebrants are encouraged to buy traditional, artisan-made clay idols.[38] Recent initiatives to produce clay Ganesha idols in Hyderabad have been sponsored by the Andhra Pradesh Pollution Control Board.[39] 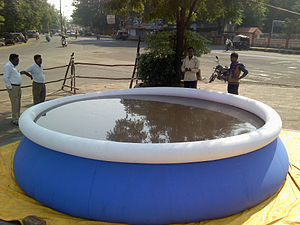 On the final day of Ganesh Chaturthi, thousands of plaster idols are immersed in bodies of water by devotees. The immersions increase the acidity and heavy-metal content of the water when plaster of Paris and heavy-metal-based paints are used.[40] Proposed solutions from non-governmental and governmental bodies include:

To address religious sensitivities, some temples and spiritual groups have taken up the cause.[42]