From Infogalactic: the planetary knowledge core
Jump to: navigation, search
Not to be confused with Dump truck. 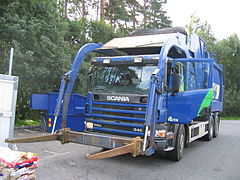 Garbage truck or dustcart refers to a truck specially designed to collect municipal solid waste and haul the collected waste to a solid waste treatment facility such as a landfill. Other common names for this type of truck include trash truck in the United States, and rubbish truck, bin wagon, dustbin lorry, bin lorry or bin van elsewhere. Technical names include waste collection vehicle and refuse collection vehicle. These trucks are a common sight in most urban areas.

Wagons and other means had been used for centuries to haul away solid waste. Among the first self-propelled dust carts were those ordered by Chiswick District Council from the Thornycroft Steam Wagon and Carriage Company in 1897 described as a steam motor tip-car, a new design of body specific for the collection of dust and house refuse.[1]

The 1920s saw the first open-topped trucks being used, but due to foul odors and waste falling from the back, covered vehicles soon became more common. These covered trucks were first introduced in more densely populated Europe and then in North America, but were soon used worldwide.

The main difficulty was that the waste collectors needed to lift the waste to shoulder height. The first technique developed in the late 20s to solve this problem was to build round compartments with massive corkscrews that would lift the load and bring it away from the rear. A more efficient model was the development of the hopper in 1929. It used a cable system that could pull waste into the truck.

In 1937, George Dempster invented the Dempster-Dumpster system in which wheeled waste containers were mechanically tipped into the truck. His containers were known as Dumpsters, which led to the word dumpster entering the language.

In 1938, the Garwood Load Packer revolutionized the industry when the notion of including a compactor in the truck was implemented. The first primitive compactor could double a truck's capacity. This was made possible by use of a hydraulic press which compacted the contents of the truck periodically.

1955 saw the Dempster Dumpmaster the first front loader introduced, however they didn't become common until the 1970s. The 1970s also saw the introduction of smaller dumpsters, often known as wheelie bins which were also emptied mechanically. Since that time there has been little dramatic change, although there have been various improvements to the compaction mechanisms in order to improve payload. In the mid-1970s Petersen Industries introduced the first grapple truck for municipal waste collection.

In 1997, Lee Rathbun introduced the Lightning Rear Steer System. This system includes an elevated, rear-facing cab for both driving the truck and operating the loader. This configuration allows the operator to follow behind haul trucks and load continuously. 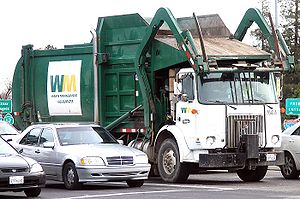 Front loaders generally service commercial and industrial businesses using large waste containers with lids known as Dumpsters in the US.[2] The truck is equipped with automated forks on the front which the driver carefully aligns with sleeves on the waste container using a joystick or a set of levers. The waste container is then lifted over the truck. Once it gets to the top the container is then flipped upside down and the waste or recyclable material is emptied into the vehicle's hopper. Once the waste is dumped, it is compacted by a hydraulically powered moving wall that oscillates backwards and forwards to push the waste to the rear of the vehicle.[3] Most of the newer packing trucks have "pack-on-the-go hydraulics" which lets the driver pack loads while driving, allowing faster route times.[4] When the body is full, the compaction wall moves all the way to the rear of the body, ejecting it via an open tailgate. There is also a system called the Curotto Can which is an attachment for a front loader that has an automated arm that functions as an automated side loader that allows the driver to dump carts. 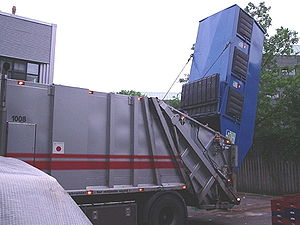 Rear loaders have an opening at the rear that a waste collector can throw waste bags or empty the contents of bins into. Often in many areas they have a lifting mechanism to automatically empty large carts without the operator having to lift the waste by hand.[5]

Another popular system for the rear loader is a rear load container specially built to fit a groove in the truck. The truck will have a chain or cable system for upending the container. The waste will then slide into the hopper of the truck.

The modern rear loader usually compacts the waste using a hydraulically powered mechanism that employs a moving plate or shovel to scoop the waste out from the loading hopper and compress it against a moving wall. In most compactor designs, the plate has a pointed edge (hence giving it the industry standard name packer blade) which is designed to apply point pressure to the waste to break down bulky items in the hopper before being drawn into the main body of the truck.

Compactor designs, however, have been many and varied, the most popular being the traditional "sweep and slide" system pioneered on the Leach 2R Packmaster. The Heil Colectomatic used a combination of a lifting loading hopper and a sweeper blade to clear and compact waste in anticipation of the next load.

So-called "continuous" compactors were popular in the 1960s and 1970s. The German Shark design (later Rotopress) used a huge rotating drum, analogous to a cement mixer, in conjunction with a serrated auger to grind down and compact the garbage. SEMAT-Rey of France pioneered the rotating rake system (also used in the British Shelvoke and Drewry Revopak) to both mutilate waste and break down large items. Other systems used a large Archimedes' screw to draw in waste and mutilate it inside the body. A mixture of safety concerns, and higher fuel consumption has seen a decline in the popularity of continuously compacting garbage trucks. The Rotopress design remains popular due to its niche in being able to effectively deal with green waste for composting.

The wall will move towards the front of the vehicle as the pressure forces the hydraulic valves to open, or as the operator moves it with a manual control.

A unique rear-loading system involves a rear loader and a front-loading tractor (usually a Caterpillar front loader with a Tink Claw) for yard waste collection (and in some cities, garbage and recycling). The front loader picks up yard waste set in the street, and then loaded into the back of a rear loader. This system is used in several cities, including San Jose.

Side loaders are loaded from the side, either manually, or with the assistance of a joystick-controlled robotic arm with a claw, used to automatically lift and tip wheeled bins into the truck's hopper. Lift-equipped trucks are referred to as automated side loaders, or ASL's. Similar to a front-end loader, the waste is compacted by an oscillating packer plate at the front of the loading hopper which forces the waste through an aperture into the main body and is therefore compacted towards the rear of the truck.[6] An Automated Side Loader only needs one operator, where a traditional rear load garbage truck may require two or three people,[7] and has the additional advantage of reducing on the job injuries due to repetitive heavy lifting. Due to these advantages, ASL's have become more popular than traditional manual collection. Typically an Automated Side Loader uses standardized wheeled carts compatible with the truck's automated lift.[8]

As with front loaders, the compaction mechanism comprises a metal pusher plate in the collection hopper which oscillates backwards and forwards under hydraulic pressure, pushing the refuse through an aperture, thus compacting it against the material already loaded. On some ASL's there is also a "folding" crusher plate positioned above the opening in the hopper, that folds down to crush bulky items within reach of the metal pusher plate. Another compactor design is the "paddle packer'' which uses a paddle that rotates from side to side, forcing refuse into the body of the truck. 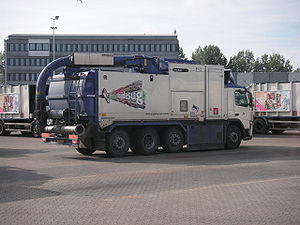 Pneumatic collection trucks have a crane with a tube and a mouthpiece that fits in a hole, usually hidden under a plate under the street. From here it will suck up waste from an underground installation. The system usually allows the driver to "pick up" the waste, even if the access is blocked by cars, snow or other barriers.

Grapple trucks enable the collection of bulk waste. A large percentage of items in the solid waste stream are too large or too heavy to be safely lifted by hand into traditional garbage trucks. These items (furniture, large appliances, branches, logs) are called bulky waste or "oversized." The preferred method for collecting these items is with a grapple truck. Grapple trucks have hydraulic knucklebooms, tipped with a clamshell bucket, and usually include a dump body or trailer.

Roll-offs are characterized by a rectangular footprint, utilizing wheels to facilitate rolling the dumpster in place. The container is designed to be transported by special roll-off trucks. They are relatively efficient for bulk loads of waste.[9]