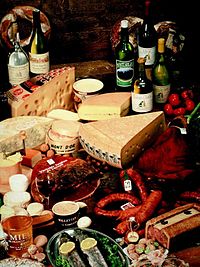 Etymologically, the word "gastronomy" is derived from Ancient Greek γαστήρ, gastér, "stomach", and νόμος, nómos "laws that govern", and therefore literally means "the art or law of regulating the stomach". The term is purposely all-encompassing: it subsumes all of cooking technique, nutritional facts, food science, and everything that has to do with palatability plus applications of taste and smell as human ingestion of foodstuffs goes.

Gastronomy involves discovering, tasting, experiencing, researching, understanding and writing about food preparation and the sensory qualities of human nutrition as a whole. It also studies how nutrition interfaces with the broader culture. Later on, the application of biological and chemical knowledge to cooking has become known as molecular gastronomy, yet gastronomy covers a much broader, interdisciplinary ground. 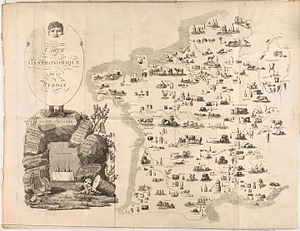 This is the first example of a carte gastronomique, a map that summarizes a country by its products at the outset of the "Cours Gastronomique" by Charles Louis Cadet de Gassicourt (1809).

The culinary term appears for the first time in a title in a poem by Joseph Berchoux in 1801 entitled "Gastronomie".[1]

The derivative gourmet has come into use since the publication of the book by Brillat-Savarin, The Physiology of Taste. According to Brillat-Savarin, "Gastronomy is the knowledge and understanding of all that relates to man as he eats. Its purpose is to ensure the conservation of men, using the best food possible."[2]

There have been many writings on gastronomy throughout the world that capture the thoughts and esthetics of a culture's cuisine during a period in their history. In some cases, these works continue to define or influence the contemporary gastronomic thought and cuisine of their respective cultures.