It is a part of the World Heritage Site Saint Petersburg and Related Groups of Monuments.[14]

Khotchino (old name of Gatchina) was first documented in 1499 as a village in possession of Novgorod the Great.[7] In the 17th century, in a series of wars, it passed to Livonia, then to Sweden, and was returned to Russia during the Great Northern War.[7] At that time, Gatchina was a southern vicinity of the new Russian capital, St. Petersburg. In 1708, Gatchina was given by Peter the Great to his sister Natalya Alexeyevna, and after her death, Peter founded an Imperial Hospital and Apothecary here.[15] In 1765, it became the property of Count Orlov.[7] Between 1766 and 1788, Count Orlov built a sombre castle with 600 rooms [16] and laid out an extensive English landscape park over 7 square kilometers (2.7 sq mi), with an adjacent zoo and a horse farm. A triumphal arch was erected to a design by the architect of Gatchina, Antonio Rinaldi (1771, built 1777-1782), forming a monumental entrance. 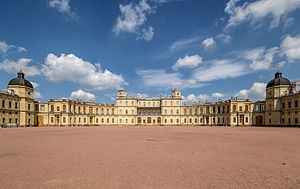 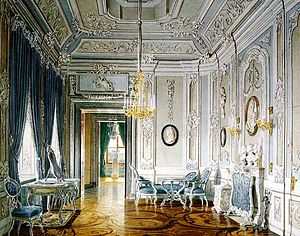 Gatchina Palace. Dressing-Room for Count Orlov, 1770s, seen in a 19th-century watercolor: much of the interior was burned by Nazis 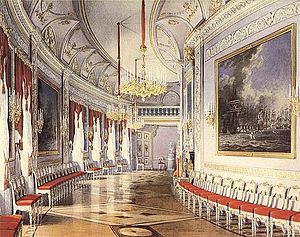 Gatchina Palace. Chesma Gallery for Grand-Duke Paul, in the Neoclassical style of the 1790s

Catherine the Great took such a great liking to the Gatchina Palace and park that at Orlov's death in 1783 she bought Gatchina and granted it to her son, the Grand Duke Paul (the future Emperor Paul I).[7] Paul I remained the owner of Gatchina for eighteen years.[7] He invested many resources as well as using his experience from his travels around Europe to make Gatchina an exemplary town and residence. During the 1790s Paul expanded and rebuilt much of the palace and renovated palatial interiors in the sumptuous Neoclassical style (illustration, left). Paul graced the park with numerous additions, bridges, gates, and pavilions, such as "The Isle of Love", "The Private garden", "The Holland garden", and "The Labyrinth", among many other additions. In November 1796, following the death of his mother, Catherine the Great, Paul became Emperor Paul I of Russia, and granted Gatchina the status of the Imperial City—an official residence of the Russian Emperors.

A remarkable monument of Paul's reign is the Priory Palace on the shore of the Black Lake. Constructed for the Russian Grand Priory of the Order of St John, it was presented to the Order by a decree of Paul I dated August 23, 1799.

After Paul's death his widow, Maria Fyodorovna owned the grand palace and park from 1801 to 1828.[7] Then Emperor Nicholas I took over ownership from 1828 to 1855. He made the most significant expansion of the palaces and parks, adding the Arsenal Halls to the main palace. The Arsenal Halls served as the summer residence of Tsar Nicholas I and his court. In 1851, Tsar Nicholas I opened the monument to his father, Paul I, in front of the Gatchina Palace. In 1853 the railroad between St. Petersburg and Gatchina opened.[7] At that time, Gatchina's territory was expanded by incorporation of several villages and vicinity.

Tsar Alexander II used Gatchina Palace as his second residence. He built a hunting village and other additions for his Imperial Hunting Crew and turned the areas south of Gatchina into his retreat, where the Tsar and his guests could indulge in living country-style among unspoiled the wilderness and woods of north-western Russia. Alexander II made updates and renovations in the Main Gatchina Palace. Tsar Alexander III, after experiencing the shock and stress of his father's assassination, made Gatchina his prime residence. The palace became known as "The Citadel of Autocracy" after the Tsar's reactionary policies. He lived most of his time in Gatchina Palace. During his reign, Alexander III introduced major technological modernization in the Gatchina Palace and parks, such as electric lights, telephone network, non-freezing water pipes, and a modern sewage system.

Nicholas II, the last Russian Tsar, spent his youth in the Gatchina Palace. His mother, the Dowager Empress Maria Fyodorovna, widow of Alexander III, was the patron of the city of Gatchina and Gatchina Palace and parks. 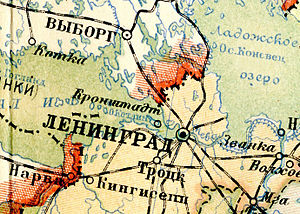 Map from 1928 showing the town as Trotsk

Gatchina was honored as the best-kept city of Russia at the 1900 World's Fair in Paris (Exposition Universelle). The quality of life, education, medical services, and public safety in Gatchina were recognized as the best, and it was recommended as an example for other cities in Russia.

One of the first airfields in Russia was established in Gatchina in 1910.[7] The pilot Pyotr Nesterov was trained at Gatchina airfield and made his first long-distance flight from Gatchina to Kiev in the 1900s. At that time, an aviation industry was developing in Gatchina, eventually becoming one of the first centers of aviation and engine technology in Russia.

During the 1900s, Gatchina remained one of the official Imperial Residences of Tsar Nicholas II, who was presiding over annual military parades and celebrations of the Imperial Russian Army garrisons, stationed in Gatchina until 1917.

In May 1918, in the former imperial palace, one of the first museums in the country was opened "for the victorious popular masses of the Russian Revolution".[21] From 1918 to 1941, the Gatchina Palace and parks were open to public as a national museum.

On February 14, 1923, the town was renamed Trotsk (Троцк),[8] after Leon Trotsky. After Stalin became General Secretary of the Communist Party and Trotsky was exiled, the town was renamed Krasnogvardeysk (Красногварде́йск; lit. the Red Guard City) on August 2, 1929.[9] During the German occupation, which lasted from September 13, 1941 to January 26, 1944, the town was known as Lindemannstadt, after the Wehrmacht general Georg Lindemann.[22] The original name was returned on January 28, 1944[9] and the town has been called Gatchina ever since.

The Nazi Germans looted much of the Gatchina palace collections of art, while occupying the palace for almost three years during World War II. The Gatchina Palace and park was severely burnt, vandalized, and destroyed by the retreating Germans. The extent of devastation was extraordinary and initially was considered irreparable damage. Restoration works continued for over 60 years after the war. Some pieces of the art collection were recovered after the war and returned to Gatchina. One section of the Gatchina Palace is partially completed and certain state rooms and the Arsenal Halls are now open to the public. Other areas of the Palace, including those of Tsar Alexander III, remain closed and unrestored.

Panorama of the view from the piers at Gatchina Palace Park

In Gatchina, there are several enterprises related to timber industry, including a paper mill, and to food industry.[23]

Gatchina is an important railway node. One railway, running north to south, connects the Baltiysky railway station in St. Petersburg with Dno and Nevel. Within the town limits, suburban trains in this direction stop at the platform of Tatyanino and the station of Gatchina-Varshavskaya. Another railway, also from the Baltiysky railway station, arrives to Gatchina from the northwest and has two stops, Mariyenburg and Gatchina-Passazhirskaya-Baltiyskaya. Yet another railway runs south of the town center from east to west and connects Mga via Ulyanovka with Volosovo. The railway station on this line in Gatchina is Gatchina-Tovarnaya-Baltiyskaya.

The M20 Highway connecting St. Petersburg and Pskov, crosses Gatchina from north to south. South of Gatchina, it crosses the A120 Highway, which encircles St. Petersburg. A paved road connects Gatchina with Kingisepp via Volosovo. There are also local roads. 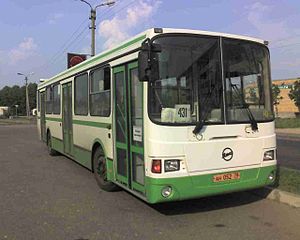 Gatchina is the site of the Petersburg Nuclear Physics Institute.[24]