Gautama Buddha, the founder of Buddhism, is also venerated as a manifestation of God in Hinduism, Ahmadiyya Muslim Community and the Bahá'í faith. Some Hindu texts regard Buddha, that he was an avatar of the god Vishnu, who came to Earth to delude beings away from the Vedic religion.[1] The Buddha is also regarded as a prophet by the Ahmadiyya Muslim Community[2][3] and a Manifestation of God in the Bahá'í faith.[4]

Some Hindus regard Buddha as the 9th Avatar of Vishnu.

Gautama Buddha is mentioned as an Avatar of Vishnu in the Puranic texts of Hinduism.[5] In the Bhagavata Purana he is twenty fourth of twenty five avatars, prefiguring a forthcoming final incarnation. A number of Hindu traditions portray Buddha as the most recent of ten principal avatars, known as the Dashavatara (Ten Incarnations of God).

Siddhartha Gautama's teachings deny the authority of the Vedas and consequently [at least atheistic] Buddhism is generally viewed as a nāstika school (heterodox, literally "It is not so"[6]) from the perspective of orthodox Hinduism.

However, while he was against the authority of the Vedas, he might not have been against the Vedas themselves. Buddhist scholar Walpola Rahula wrote that the Buddha was trying to shed light on the true meaning of the Vedas.[citation needed] Buddha is said to be a knower of the Veda (vedajña) or of the Vedanta (vedântajña) (Sa.myutta, i. 168) and (Sutta Nipâta, 463).

Many of the eighteen orthodox Puranas mention the Buddha in a less favouring light. They present the birth of the Buddha as a ploy by the Supreme God Vishnu to corrupt demons and sway them from Vedic teachings. Only by leading them astray with his teachings could the demons be destroyed. This belief is sometimes associated with the Asuras of Tripura (the three citadels) as well as others. Literature from the International Society for Krishna Consciousness, on the other hand, maintains that Krishna took the appearance of an atheistic teacher out of benevolence, in order to trick atheists into worshipping God (i.e., himself).

Some early Chinese Taoist-Buddhists thought the Buddha to be a reincarnation of Lao Tzu.[7]

Mirza Tahir Ahmad, the Fourth Caliph of the Ahmadiyya Muslim Community, in his book Revelation, Rationality, Knowledge & Truth, argues that Buddha was indeed a prophet of God who preached Monotheism. He quotes from the inscriptions on Ashoka's stupas which mention "Isa'na" which means God. He quotes, "'Thus spake Devanampiya Piyadasi: "Wherefore from this very hour, I have caused religious discourses to be preached, I have appointed religious observances that mankind, having listened thereto, shall be brought to follow in the right path, and give glory to God* (Is'ana)."[8] The Ahmadiyya Muslim Community, holds the view that the Buddha was indeed a Prophet of God.

Mirza Tahir Ahmad has also stated that the Qur'anic figure called Dhul-Kifl may have been the Buddha in his book "An Elementary Study of Islam."[9]

In fact, a verse in the Qur'an quotes that God has sent many prophets to thee (Humanity). However, only a few have been named. It is believed by some that Buddha may (or may not) have been a Prophet of God sent to his people who taught Monotheism. 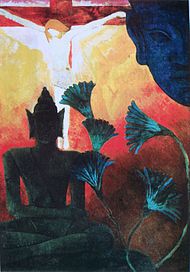 Christ and Buddha by Paul Ranson, 1880

The Greek legend of "Barlaam and Ioasaph", sometimes mistakenly attributed to the 7th century John of Damascus but actually written by the Georgian monk Euthymius in the 11th century, was ultimately derived, through a variety of intermediate versions (Arabic and Georgian) from the life story of the Buddha. The king-turned-monk Ioasaph (Georgian Iodasaph, Arabic Yūdhasaf or Būdhasaf: Arabic "b" could become "y" by duplication of a dot in handwriting) ultimately derives his name from the Sanskrit Bodhisattva, the name used in Buddhist accounts for Gautama before he became a Buddha.[10][11] Barlaam and Ioasaph were placed in the Greek Orthodox calendar of saints on 26 August, and in the West they were entered as "Barlaam and Josaphat" in the Roman Martyrology on the date of 27 November.

The story was translated into Hebrew in the 13th century by Abraham Ibn Chisdai (or Hasdai) as "Ben-Hamelekh Vehanazir" ("The Prince and the Nazirite").[citation needed]