Gavriil Abramovich Ilizarov (Russian: Гавриил Абрамович Илизаров; 15 June 1921 – 24 July 1992) was a Soviet physician, known for inventing the Ilizarov apparatus for lengthening limb bones and for the method of surgery named after him, the Ilizarov surgery.

Ilizarov was born a sixth child to a poor Jewish peasant family in Białowieża, Polesie Voivodeship, Poland. Shortly before his birth, the family moved to the parents of his mother in Białowieża from the town Qusar in Azerbaijan, near Qırmızı Qəsəbə. His father, Abram Ilizarov, was a Mountain Jew from Qusar, while the mother, Golda Ilizarova,[1] was of Ashkenazi Jewish ancestry.[2][3] Soon after Gavriil's birth, the family moved back to Qusar, where he grew up. He graduated from Buynaksk Medical Rabfac (an educational establishment set up to prepare workers and peasants for higher education) in 1939 and entered the Crimea Medical School in Simferopol. After the outbreak of the Great Patriotic War in 1941 the school was evacuated to Kyzylorda in Kazakhstan.[4] After finishing the school in 1944 Ilizarov was sent to a rural hospital in Dolgovka, a village in Kurgan Oblast in Siberia, 2000 km east of Moscow.[5] In 1950 he obtained a position within a General Surgery Department of the Kurgan Regional Hospital which included a duty as a surgeon with the air ambulance. In 1955 he became Chief of the Department of Trauma and Orthopaedics in the Regional Hospital for War Veterans in Kurgan.[6][7] 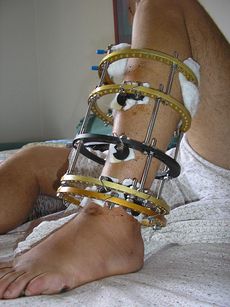 An Ilizarov apparatus treating a fractured tibia and fibula

Ilizarov's residency was carried out in orthopedic surgery, during which he developed an external fixator system (1951). He discovered that by carefully severing a bone without severing the periosteum around it, one could separate two halves of a bone slightly and fix them in place, and the bone would grow to fill the gap.[8] He also discovered that bone regrows at a fairly uniform rate across people and circumstances.

These experiments led to the design of what is known as an Ilizarov apparatus, which holds a bone so severed in place, by virtue of a framework and pins through the bone, and separates halves of the bone by a tiny amount; by repeating this over time, at the rate of the bone's regrowth, it is possible to extend a bone by a desired amount. The procedure was inspired by a shaft bow harness on a horse carriage.[6] Originally bicycle parts were used for the frame.

For long time, Ilizarov faced skepticism, resistance and political intrigues from the medical establishment in Moscow which tried to defame him as a "quack". However, the steadily increasing statistics of successful treatments of patients led to a growing fame of Ilizarov throughout the country. He became known among patients as the "magician from Kurgan". In 1968 Ilizarov defended his doctoral thesis in Perm and was awarded the title Doctor of Sciences bypassing the Candidate of Sciences degree for which the thesis had originally been prepared.[6]

A breakthrough came in 1968 when Ilizarov successfully operated on Valeriy Brumel, the 1964 Olympic champion and a long-time world record holder in the men's high jump, who injured his right leg in a motorcycle accident. Before coming to Ilizarov, Brumel spent about three years for unsuccessful treatments in various clinics and underwent seven invasive and 25 non-invasive surgeries.[6][9]

In 1971 the Kurgan Research Institute for Experimental and Clinical Orthopaedics and Traumatology (KNIIEKOT) was established in Kurgan. In the center the Ilizarov method of transosseous osteosynthesis is applied to lengthen or reshape limb bones. Ilizarov was the head of this center until 1991. With ca. 1000 beds, 24 operating rooms, and 168 employed physicians, the Center became the largest orthopedic clinic in the world.[10][11][12] After his death the center was renamed the Russian Ilizarov Scientific Center for Restorative Traumatology and Orthopaedics (RISC RTO).

Today, the staff includes ten professors, 34 Doctors of Sciences and 193 Candidates of Sciences. The Center comprises an out-patient clinic where 250 patients can be consulted daily, a hospital with 800 beds, an experimental department, and animal surgery. Every year over 9000 people undergo treatment at the RISC RTO.[13]

Scattered reports about the successful treatment of Brumel by Ilizarov appeared in the Western press.[6] The first medical visitor was Dr. Johannes Hellinger from the former GDR, Medical Academy of Erfurt in 1970 reported Beitr. Orthop. Traumatol. 1971: 18, H.2. He made a first publication in a Western medical journal about the Ilizarov Method.[14]

In 1980 during the Cold War era, Carlo Mauri, an Italian mountaineer, explorer and photojournalist, on the urgings of his Russian colleague Yuri Senkevich, travelled to Kurgan, in the Soviet Union. He was to be treated by Ilizarov for a tibial fracture that healed incorrectly after a skiing accident ten years earlier. Italian doctors had long given up hope of any surgical improvement to the leg. Ilizarov distracted the stiff non-union in his tibia by 2 cm, healing the pseudarthrosis, corrected an equinus deformity by distraction and lengthened his leg. Mauri dubbed Ilizarov "the Michelangelo of Orthopaedics".[15] On his return to Italy, the healing of Mauri's leg amazed orthopaedic surgeons. Subsequent to this, Ilizarov was invited by Antonio Bianchi-Maiocchi and Roberto Cattaneo to be a guest speaker at the AO Italy conference in 1981 in Bellagio. He gave three lectures at the conferences to more than 200 participants from Italy, France, Switzerland, Austria, and Germany. At the end of the lectures, Ilizarov earned a ten-minute standing ovation. This was the first time Ilizarov spoke outside of the Iron Curtain.[6][16]

In 1982, the Association for the Study and Application of the Methods of Ilizarov (ASAMI) was formed in Italy.[8][17][18] In 1983, Medicalplastic, a company owned by Bianchi-Maiocchi, licensed the technique from the Soviet authorities, registered the ILIZAROV trademark,[19] and started to produce and market the Ilizarov apparatus.[16] In the following years, the Ilizarov method has spread rapidly through most of Western Europe. ASAMI organised courses in Italy, Portugal, Switzerland, France, Spain, Greece, Brazil and the United States. ASAMI groups were formed in France, Spain, Belgium, Portugal and Brazil.[20]

In 1986–1987, the technique was brought to North America by Victor Frankel, president of Hospital for Joint Diseases,[15][17] Dror Paley,[15][16] and Stuart Green[15] who, in 1992, edited the first English translation of Ilizarov's book.[21] Over 300 American orthopaedic surgeons attended an international symposium organised in 1987 in New York by the Hospital for Joint Diseases and the Smith & Nephew company to hear the lectures by Ilizarov. Smith & Nephew started the distribution of the Ilizarov external fixator in the USA and worldwide.[15]

In 1989 an Ilizarov conference was organised by Dietmar Wolter in Hamburg. In 1990, Ilizarov came to the second conference in Hamburg, where he co-founded the German Ilizarov Society (Deutsche Ilisarow-Gesellschaft). The hospital of the German Accident Prevention & Insurance Association (Berufsgenossenschaftliches Unfallkrankenhaus, BGUK) in Boberg, Hamburg-Lohbrügge, became a major center in Germany applying and promoting the Ilizarov technique.[22][23][24][25][26][27] It became compulsory for all senior physicians of the hospital to visit the Kurgan Center for learning the Ilizarov method.

The opposition by the Moscow medical establishment continued until the last years of Ilizarov's life. As late as 1991, just one year before his death, Ilizarov was elected a full member of the Russian Academy of Sciences.[28] Despite numerous awards and the world-wide recognition, he was not elected to the USSR Academy of Medical Sciences.[29]

Dr Ilizarov was survived by his daughters Maria and Svetlana Ilizarov, a practicing Physiatrist in New York, and son Alexander.[30][12] His grandson Gavriil is also a Physiatrist in training.[31] 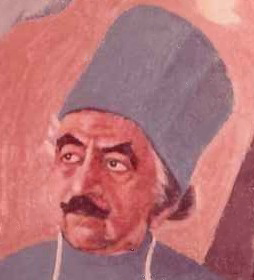 Portrait of Ilizarov by Israel Tsvaygenbaum