From Infogalactic: the planetary knowledge core
Jump to: navigation, search
For other uses, see Gaze (disambiguation). 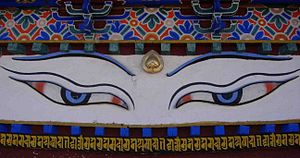 In numerous religions God « sees » the interior of Man, brings visions, where the sight of the prayer towards the world has an importance (eyes painted on the summit of Kumbum of Gyantsé, in Tibet). A « third eye » representing according to the interpretations the inner sight, or the chakra Ajna, or still the pineal gland.

Gaze means "to look steadily, intently, and with fixed attention."[1]

In one sense, it is a term popularized by psychoanalyst Jacques Lacan for the anxious state that comes with the awareness that one can be viewed. The psychological effect, Lacan argues, is that the subject loses a degree of autonomy upon realizing that he or she is a visible object. This concept is bound with his theory of the mirror stage, in which a child encountering a mirror realizes that he or she has an external appearance. Lacan suggests that this gaze effect can similarly be produced by any conceivable object such as a chair or a television screen. This is not to say that the object behaves optically as a mirror; instead it means that the awareness of any object can induce an awareness of also being an object.

It has also been called an aspect of one of the "most powerful human forces"; that is, "the meeting of the face and the gaze" because "Only there do we exist for one another."[2]

History of the Lacan concept

Numerous existentialists and phenomenologists have addressed the concept of gaze beginning with Jean-Paul Sartre.[3] Foucault elaborated on gaze to illustrate a particular dynamic in power relations and disciplinary mechanisms in his Discipline and Punish. Derrida also elaborated on the relations of animals and humans via the gaze in The Animal That Therefore I Am. The concept of a male gaze was originally theorized by feminist film theorist Laura Mulvey, and has since been applied to many other forms of media and technology, such as advertisements, the work space, and video games.

Systems of power and the gaze

Michel Foucault first used the term "medical gaze" in The Birth of the Clinic to explain the process of medical diagnosis, power dynamics between doctors and patients, and the hegemony of medical knowledge in society. He elaborated on the gaze to illustrate a particular dynamic in power relations and disciplinary mechanisms in his Discipline and Punish, such as surveillance and the function of related disciplinary mechanisms and self-regulation in a prison or school as an apparatus of power.

The gaze is not something one has or uses; rather, it is the relationship into which someone enters. As Marita Sturken and Lisa Cartwright write in Practices of Looking, "The gaze is integral to systems of power and ideas about knowledge."[4] Three main concepts that Foucault introduced are panopticism, power/knowledge, and biopower. These concepts all address self-regulation under systems of surveillance. This refers to how people modify their behaviour under the belief that they are constantly being watched even if they cannot directly see who or what is watching them. This possible surveillance, whether real or unreal, has self-regulating effects.[5]

In her 1975 essay Visual Pleasure and Narrative Cinema, Laura Mulvey introduced the second-wave feminist concept of "male gaze" as a feature of gender power asymmetry in film. The concept was present in earlier studies of the gaze,[specify] but it was Mulvey who brought it to the forefront. Mulvey stated that women were objectified in film because heterosexual men were in control of the camera. Hollywood films played to the models of voyeurism and scopophilia.[6] The concept has subsequently been influential in feminist film theory and media studies. [7]

E. Ann Kaplan has introduced the post-colonial concept of the imperial gaze, in which the observed find themselves defined in terms of the privileged observer's own set of value-preferences.[8] From the perspective of the colonised, the imperial gaze infantilizes and trivializes what it falls upon,[9] asserting its command and ordering function as it does so.[10]

Kaplan comments: “The imperial gaze reflects the assumption that the white western subject is central much as the male gaze assumes the centrality of the male subject”.[11]

First referred to by Edward Said as "orientalism", the term "post-colonial gaze" is used to explain the relationship that colonial powers extended to people of colonized countries.[12] Placing the colonized in a position of the "other" helped to shape and establish the colonial's identity as being the powerful conqueror, and acted as a constant reminder of this idea.[13] The postcolonial gaze "has the function of establishing the subject/object relationship... it indicates at its point of emanation the location of the subject, and at its point of contact the location of the object."[14] In essence, this means that the colonizer/colonized relationship provided the basis for the colonizer's understanding of themselves and their identity.[13] The role of the appropriation of power is central to understanding how colonizers influenced the countries that they colonized, and is deeply connected to the development of post-colonial theory. Utilizing postcolonial gaze theory allows formerly colonized societies to overcome the socially constructed barriers that often prohibit them from expressing their true cultural, social, economic, and political rights.[13]

The tourism image is created through cultural and ideological constructions and advertising agencies that have been male dominated. What is represented by the media assumes a specific type of tourist: white, Western, male, and heterosexual, privileging the gaze of the “master subject” over others.[15] This is the representation of the typical tourist because those behind the lens, the image, and creators are predominantly male, white, and Western. Those that do not fall into this category are influenced by its supremacy. Through these influences female characteristics such as youth, beauty, sexuality, or the possession of a man are desirable while the prevalence of stereotypes consisting of submissive and sensual women with powerful “macho” men in advertising are projected.[15]