From Infogalactic: the planetary knowledge core
(Redirected from Gediminid)
Jump to: navigation, search

The Gediminids (Lithuanian: Gediminaičiai, Polish: Giedyminowicze, Belarusian: Гедзімінавічы, Ukrainian: Гедиміновичі, Russian: Гедиминовичи) were a dynasty of monarchs in the Grand Duchy of Lithuania that reigned from the 14th to the 16th century. One branch of this dynasty, known as the Jagiellons, reigned also in the Kingdom of Poland, Kingdom of Hungary and Kingdom of Bohemia. Several other branches ranked among the leading aristocratic dynasties of Russia and Poland into recent times.

Their monarchical title in Lithuanian primarily was, by some folkloristic data, kunigų kunigas ("Duke of Dukes"), and later on, didysis kunigas ("Great/High Duke") or, in a simple manner, kunigaikštis. In the 18th century the latter form was changed into tautological didysis kunigaikštis, which nevertheless would be translated as "Grand Duke" (for its etymology, see Grand Prince).

The origin of Gediminas himself is much debated. Some sources say he was Vytenis' ostler, others that he was of peasant stock. Some historians consider him as the son or grandson of Lithuanian or Yatvingian duke Skalmantas. Most scholars agree, however, that Gediminas was Vytenis' brother (the parentage of Vytenis is explained differently in various fake genealogies, compiled from the 16th century onwards; according to the latest Polish research, his parentage cannot be established.[1]

Branches of the dynasty 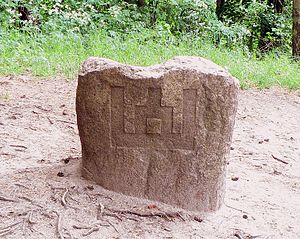 The Eastern Orthodox branches of the family were mostly Ruthenian, which also was one of the two main languages of their established state. Some of these families (e.g., Czartoryski) later converted to Roman Catholicism and became thoroughly Polonized. Others (e.g., Galitzine) moved to Muscovy and became thoroughly Russified.

I. The descendants of Narimantas:

II. The descendants of Algirdas:

III. The descendants of Kęstutis (faded in the second half of the 15th century)

IV. The descendants of Jaunutis:

V. The descendants of Liubartas (faded in the first half of the 15th century)