The gender of God can be viewed as a literal or as an allegorical aspect of a deity. In polytheistic religions, the gods are more likely to have literal sexual genders which would enable them to interact with each other, and even with humans, in a sexual way. In most monotheistic religions, there is no comparable being for God to relate to in a literal gender-based way, so the gender of this one-and-only deity is most likely to be an analogical statement of how humans and God address, and relate to, each other, with no sexual connotations. Although God is an intangible spirit in many religions and therefore has no gender, debate over his or her "actual" sex nevertheless has passionately raged in recent decades. The preponderance of references to God in both the Old and New Testaments are in the context of a masculine reference, often "father". However, there are a significant number of feminine allegorical references to the Judaeo-Christian god, most often in some maternal role.

What is understood by words for God varies across cultures and has sometimes changed dramatically at various times. Buddhism challenged various ideas in Vedic religion, the monotheism of Judaism challenged its polytheistic neighbours, and in European history, the Roman Empire officially adopted Christianity under Constantine I, later becoming the center of the Christian religion, but having this centrality challenged during the Reformation.

A simple view of the history of religion as an evolutionary process was proposed in the 19th century—from animism to polytheism to monotheism, with some believing theism, atheism or agnosticism to be the most advanced approach. Such views are no longer widely current in the study of religion.[1] Comparative religion notes distinctive idiosyncrasies across major religions that are better explained by close historical scrutiny,[2] rather than appeal to a simplistic theory.[3]

Nonetheless, a hegemonic Western conception of metaphysics influenced strongly by Judaism and Christianity is identifiable in European literature from Greek and Roman authors through to the present, such that English language betrays an inherent bias towards monotheistic thought. Where animist languages may not even have words for personal deities, but rather a nuanced vocabulary of spiritualism, and polytheistic cultures have lexis suited to articulating relationships between deities in a pantheon, some modern English speakers only recognize alternatives such as God, gods or no God, being unfamiliar with Buddhism and animism.

When considering the literature of the world's religions and metaphysical philosophies, the diversity of the underlying conceptions of the spiritual realm is foundational to appreciating any points of comparison. Comparison of views of the gender of spiritual entities is no exception. Each religion or philosophy needs to be understood in its historical, social, linguistic and philosophical context. Thus, matters of gender do apply to animism, but not in the foundational way they do in polytheism and monotheism. Additionally, since animism is largely associated with oral societies, we are dependent on the ethnographies of cultural anthropologists rather than documented scriptures and later commentary.[4] Shinto is a notable exception.[citation needed]

In the Hebrew and Christian Bible

Although God is referred to in the Hebrew Bible with masculine imagery and grammatical forms, Jewish philosophy does not attribute to God either sex or gender.[8] At times, Jewish aggadic literature and Jewish mysticism do treat God as gendered, though these are not uniformly masculine or feminine.[citation needed] 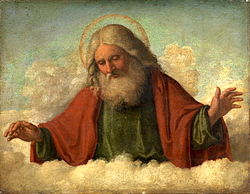 Most Christian groups conceive of God as Triune, having the belief that God the Father, God the Son, and God the Holy Spirit are distinct persons, but one being that is wholly God.[9][10]

God the Son (Jesus Christ), having been incarnated as a human man, is clearly masculine. God the "Father" or "Creator" is interpreted as clearly masculine to Biblical literalists.[citation needed] Classical western philosophy believes that God lacks a literal sex because it would be impossible for God to have a body (a prerequisite for sex).[11][12] However, Classical western philosophy states that God should be referred to (in most contexts) as masculine by analogy. It justifies this by pointing to God's relationship with the world as begetter of the world and revelation (i.e. analogous to an active instead of receptive role in sexual intercourse).[13] Others interpret God as neither male nor female.[14][15]

The Catechism of the Catholic Church #239 specifically states that "God is neither man nor woman: he is God".[16][17]

In contrast to most other Christian denominations, The Church of Jesus Christ of Latter-day Saints (LDS Church) teaches that God the Father, God the Son, and the Holy Spirit are physically distinct while being one in purpose.[18][19] The LDS Church also teaches that God the Father is married to a divine woman, referred to as "Heavenly Mother."[20] Humans are considered to be spirit children of these heavenly parents.[21]

Gender of the Holy Spirit

In Hebrew language, in the Old Testament the divine presence of God, the Holy Spirit, the Shekhinah is feminine.[citation needed]

The New Testament also refers to the Holy Spirit as masculine in a number of places, where the masculine Greek word "Paraclete" occurs, for "Comforter", most clearly in the Gospel of John, chapters 14 to 16.[22] These texts were particularly significant when Christians were debating whether the New Testament teaches that the Holy Spirit is a fully divine person, or some kind of "force". All major English Bible translations have retained the masculine pronoun for the Spirit, as in John 16:13. Although it has been noted that in the original Greek, in some parts of John's Gospel, the neuter Greek word for "it" is also used for the Spirit.[citation needed]

The oneness of God is of primary importance in the Qur'an and Islam. In Qur'an, Allah is most often referred to with the pronouns Hu or Huwa, and although these are commonly translated as him, they can also be translated gender-neutrally, as it. This is also true of the feminine equivalent, Hiya. Qur'an 112:3–4 states: "He begets not, nor is He begotten. And none is like Him [It]." Other references include the first person pronoun, and the relative pronoun ma (that which), as in the phrase "the heavens and that which created them" (Qur'an 91:5). The focus of worship for Muslims, the Ka'aba, was linked in pre-Islamic times to a female deity.[23][24]

The oldest of the Hindu scriptures is the Rigveda (2nd millennium BC). The first word of the Rigveda is the name Agni, the god of fire, to whom many of the vedic hymns are addressed, along with Indra the warrior. Agni and Indra are both male divinities.

The Rigveda refers to a creator (Hiranyagarbha or Prajapati), distinct from Agni and Indra. This creator is identified with Brahma (not to be confused with Brahman, the first cause), born of Vishnu's navel, in later scriptures. Hiranyagarbha and Prajapati are male divinities, as is Brahma (who has a female consort, Saraswati).

There are many other gods in the Rigveda.[25] They are "not simple forces of nature", and possess "complex character and their own mythology".[25] They include goddesses of water (Āpaḥ) and dawn (Uṣas), and the complementary pairing of Father Heaven and Mother Earth.[25] However, they are all "subservient to the abstract, but active positive 'force of truth'" (Rta), "which pervades the universe and all actions of the gods and humans."[25] This force is sometimes mediated or represented by moral gods (Āditya such as Varuṇa) or even Indra.[25] The Āditya are male and Rta is personified as masculine in later scriptures (see also Dharma).

In some Hindu philosophical traditions, God is depersonalized as the quality-less Nirguna Brahman, the fundamental life force of the universe. However, theism itself is central to Hinduism.[26]

While many Hindus focus upon God in the neutral form,[citation needed] Brahman being of neuter gender grammatically, there are prominent Hindu traditions that conceive God as female, even as the source of the male form of God, such as the Shakta denomination. Hinduism, especially of the Samkhya school, views the creation of the cosmos as the result of the play of two radically distinct principles: the feminine matter (Prakriti) and the masculine spirit (Purusha). Prakriti is the primordial matter which is present before the cosmos becomes manifest. Prakriti is seen as being "...the power of nature, both animate and inanimate. As such, nature is seen as dynamic energy" (Rae, 1994). Prakriti is originally passive, immobile and pure potentiality by nature . Only through her contact with the kinetic Purusha she unfolds into the diverse forms before us. The idea of Prakriti/Purusha leads to the concept of the Divine Consort. Almost every deva of the Hindu pantheon has a feminine consort (devi).[27]

The Guru Granth consistently refers to God as "He" and "Father". However, it also says that God is indescribable. Thus, God in Sikhism has no gender. The Akal Purakh ("Timeless Man") is referred to as one of the gender, simply because the Granth is written in north Indian Indo-Aryan languages (mixture of Punjabi and dialects of Hindi) which have no neutral gender.

It is described as energy that prevails throughout the universe.

Animist religions are common among oral societies, many of which still exist in the 21st century. Typically, natural forces and shaman spiritual guides feature in these religions, rather than fully fledged personal divinities with established personalities. It is in polytheism that such deities are found. Animist religions often, but not always, attribute gender to spirits considered to permeate the world and its events. Polytheistic religions, however, almost always attribute gender to their gods, though a few notable divinities are associated with various forms of epicene characteristics—gods that manifest alternatingly as male and female, gods with one male and one female "face", and gods whose most distinctive characteristic is their unknown gender.[28]

Carol P. Christ is the author of the widely reprinted essay "Why Women Need the Goddess,",[29] which argues in favor of the concept of there having been an ancient religion of a supreme goddess. This essay was presented as the keynote address to an audience of over 500 at the "Great Goddess Re-emerging" conference at the University of Santa Cruz in the spring of 1978, and was first published in Heresies: The Great Goddess Issue (1978), pgs. 8-13.[30] Carol P. Christ also co-edited the classic feminist religion anthologies Weaving the Visions: New Patterns in Feminist Spirituality (1989) and Womanspirit Rising (1979/1989); the latter included her essay Why Women Need the Goddess.[30]