General of the army (Russia)

From Infogalactic: the planetary knowledge core
(Redirected from General of the Army (Russia))
Jump to: navigation, search 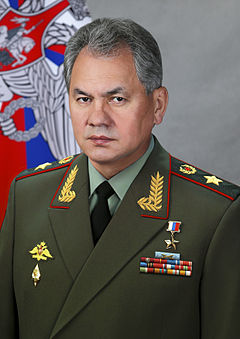 Defence secretary general of the army S.Shoygu with shoulder boards.

General of the army (Russian: генерал армии, general armii) is the second highest military rank in the Russian Federation, inferior only to a marshal and superior to a colonel general. It is a direct counterpart of the Soviet "General of the army" rank.

At present it is also the highest rank in the air force, artillery, aerospace defense forces, armored troops, engineer troops and signal troops. Unlike the Soviet Union where similarly ranked officers were called marshals and chief marshals of a branch. The corresponding naval rank is admiral of the fleet.

On appointment as Defense Minister on 7 May 1992, Pavel Grachev was the first officer to be promoted to this rank.

Until 1997 generals wore a "small" marshal's star. But when in 1993 ranks of chief marshal and marshal of the branch in Russian Federation were abolished, there was no more reason for special rank insignia for generals. By the President's decree of January 27, 1997 generals regained 1943-like straps with 4 stars in a row.

Vladimir Yakovlev was promoted to this grade while serving as commander of the Strategic Missile Troops (1997-2001).