General of the Infantry (Germany) 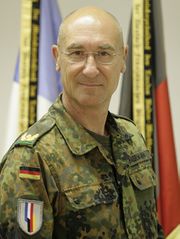 General of the Infantry (German: General der Infanterie) is a former rank of German Ground forces (de: Heer). Present it is an appointment or position to an OF6-rank officer, responsible for particular affairs of training and equipment of the Bundeswehr infantry.

General of the Infantry was a former rank of General of the branch OF8 in the German land forces (Imperial Army, Reichswehr and Wehrmacht) and also in the Prussian Army and the Austro-Hungarian Army. It was the third-highest General officer rank, subordinate only to Colonel General and Field Marshal. It is equivalent to a three-star rank today. The same rank was adopted by the Finnish Army (Finnish: Jalkaväenkenraali) between the world wars.

In the modern German armed forces, the Bundeswehr, the rank of Generalleutnant (Lieutenant General) corresponds to the traditional rank of General der Infanterie. There was no equivalent rank in the army of East Germany, where it was merged into that of Generaloberst.

General der Infanterie in the Bundeswehr

In the Bundeswehr, the position of an infantry officer responsible for certain questions of troop training and equipment, usually with the rank of Brigadier Generals. The position of general of the infantry is connected with that of commander of the infantry school. Corresponding service positions also exist for other branches of the army. Since in this usage it refers to a position not a rank, an Oberst is sometimes "General of" his respective type of troops. The form of address is usually Herr General and/or Herr Oberst; the form of address Herr General der Infanterie is unorthodox, since it does not refer to a rank.

Note that a number of these officers may also have gone on to higher ranks during their careers.