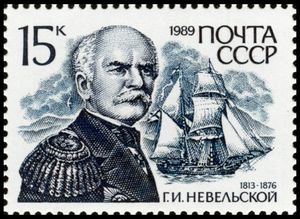 Nevelskoy on a 1989 Soviet commemorative stamp

Nevelskoy Strait is the narrowest section of the Strait of Tartary

In 1848 Nevelskoy led the expedition in the Russian Far East, exploring the area of the Sakhalin and the outlet of the Amur River. He proved that the Strait of Tartary was not a gulf, but indeed a strait, connected to Amur's estuary by a narrow section later called Nevelskoy Strait. On 13 August 1850 he founded Nikolayevsk-on-Amur, the first Russian settlement in the region.

Not knowing about the efforts of Japanese navigator Mamiya Rinzō who explored the same area forty years earlier, the Russians took Nevelskoy's report as the first proof that Sakhalin is indeed an island. They renamed the Gulf of Tartary the Strait of Tartary, and named the northernmost, narrowest section of the strait, the Strait of Nevelskoy, in the captain's honour. It connects the strait's main body (formerly known as the Gulf of Tartary) with the Amur Liman (Amur River estuary).