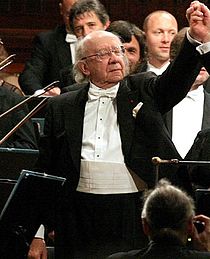 This name uses Eastern Slavic naming customs; the patronymic is Nikolayevich and the family name is Rozhdestvensky.

Rozhdestvensky was born in Moscow. His parents were the noted conductor and pedagogue Nikolai Anosov and soprano Natalya Rozhdestvenskaya. His given name was Gennady Nikolayevich Anosov, but he adopted his mother’s maiden name in its masculine form for his professional career so as to avoid the appearance of nepotism. His younger brother, the painter P.N. Anosov, retained their father's name.

He studied conducting with his father at the Moscow Conservatory and piano with Lev Oborin. Already known for having conducted Tchaikovsky's The Nutcracker ballet at the Bolshoi Theatre at the age of 20, he quickly established his reputation. He premiered many works of Soviet composers, including Edison Denisov's Le soleil des Incas (Sun of the Incas) (1964),[1] as well as giving the Russian premiere of Benjamin Britten's A Midsummer Night's Dream and the Western premiere of Dmitri Shostakovich's Fourth Symphony at the 1962 Edinburgh Festival. He became general artistic director of the Bolshoi Theatre in 2000, and in 2001 conducted the world premiere of the original version of Sergei Prokofiev's opera The Gambler.[2] Not long afterwards he resigned, citing desertion by singers, production problems and hostile coverage by the Moscow press.[3]

Among the works dedicated to Rozhdestvensky are Sofia Gubaidulina's symphony Stimmen... Verstummen... and several of Alfred Schnittke's works, such as Symphony No. 1, Symphony No. 8, and Symphony No. 9. Schnittke wrote of him:

"I once calculated that there are now some forty compositions written for Rozhdestvensky—either derived from his ideas or else he was the first to conduct them. I could not believe it, but it really is so. I could even say that nearly all my own work as a composer depended on contact with him and on the many talks we had. It was in these talks that I conceived the idea for many of my compositions. I count that as one of the luckiest circumstances of my life."[4]

Rozhdestvensky is considered a versatile conductor and a highly cultured musician with a supple stick technique. In moulding his interpretations, he gives a clear idea of the structural outlines and emotional content of a piece, combined with a performing style which melds logic, intuition and spontaneity.[5] He has been praised for his efficient rehearsals which he keeps short, and is noted for his habit of walking around the stage while conducting and not using a podium, even at concerts.

He edited the second volume of the collected works of Shostakovich published in 1984, including the Symphony No. 3 and Symphony No. 4.

Conductor Rozhdestvensky is featured in the documentary Notes interdites : scènes de la vie musicale en Russie Soviétique (Bruno Monsaingeon, 2004, 55m 44s, English title: "The Red Baton") [1], which examines the hardships faced by musicians in the Soviet Union under Stalinism. In it, he describes the political situation and its impact on his life, as well as those of Shostakovich, Prokofiev, Stravinsky, Richter and other colleagues. The role of Tikhon Khrennikov, Secretary of the Union of Soviet Composers, is discussed extensively.

On a lighter note, the documentary features Rozhdestvensky discussing the art of conducting, and includes footage of masterclasses, rehearsals with students from the Moscow Conservatory and Zürich's Tonhalle orchestra, as well as snippets of Rozhdestvensky conducting Shostakovich's 7th Symphony, Tchaikovsky's Romeo and Juliet, and Alfred Schnittke's Dead Souls.[citation needed]

With the USSR Ministry of Culture Symphony Orchestra he recorded all the symphonies of Dmitri Shostakovich, Alexander Glazunov, Anton Bruckner, Alfred Schnittke, and Arthur Honegger. He also performed all the symphonies of Ralph Vaughan Williams in Leningrad in the late 1980s. Those have been released, by the Melodiya label, in a complete CD box set in April 2014.

In 1969 he married the pianist Viktoria Postnikova.