From Infogalactic: the planetary knowledge core
Jump to: navigation, search
"Zyuganov" redirects here. For other people with this surname, see Zyuganov (surname).

Zyuganov was born in Mymrino, a farming village in Oryol Oblast, south of Moscow on 26 June 1944. The son and grandson of schoolteachers, he followed in their footsteps. After graduating from a secondary school, his first job was working there for one year as a physics teacher in 1961.

In 1962, he enrolled into the Department of Physics and Mathematics of the Oryol Pedagogical Institute. From 1963 to 1966, he served in a Radiation, Chemical, and Biological Intelligence unit of the Group of Soviet Forces in Germany. Zyuganov joined the Communist Party in 1966.

He returned to the teachers' college in 1966. Three years older than most members of the sophomore class, he was already a party member and a popular college athlete. On his return, he also married his wife, Nadezhda. He completed his degree in 1969.

Zyuganov taught mathematics but soon turned to party work in Oryol Oblast, beginning in 1967. He became the First Secretary of the local Komsomol and the regional chief for ideology and propaganda. He emerged as a popular politician in the area. Among many other functions, Zyuganov organized parties and dances as a local Komsomol leader while he was rising through the ranks of the vast network of party apparatchiks. Zyuganov rose to be second secretary, or second in command, of the party in Oryol.

He enrolled at an elite party school in Moscow, the Academy of Social Sciences in 1978, completing his doctor nauk, a post-doctoral degree, in 1980. He then returned to Oryol to become regional party chief for ideology and propaganda until 1983. In 1983, he was given a high-level position in Moscow as an instructor in the Communist Party propaganda department.

Zyuganov emerged as a leading critic of Soviet leader Mikhail Gorbachev's perestroika and glasnost in the party's Agitation and Propaganda division (later the Ideological division), a hotbed of opposition to reform. As the party began to crumble in the late 1980s, Zyuganov took the side of hard-liners against reforms that would ultimately culminate in the end of CPSU rule and the dissolution of the Soviet Union. In May 1991, he published a fiercely critical piece on Alexander Yakovlev.

Head of the Communist Party of the Russian Federation

Zyuganov wrote several influential papers in the early 1990s attacking Boris Yeltsin and calling for a return to the socialism of the pre-Gorbachev days. In July 1991, he signed the "A Word to the People" declaration. As the Communist Party of the Soviet Union fell into disarray, Zyuganov helped form the new Communist Party of the Russian Federation (CPRF), and became one of seven secretaries of the new group's Central Committee. In 1993, he became its chairman. Outside observers were surprised by the survival of Zyuganov's Communist Party into the post-Soviet era.

Zyuganov quickly emerged as post-communist Russia's leading opposition leader. He argued that the collapse of the Soviet Union led to a decline in living standards, that economic power was left concentrated in the hands of a tiny share of the population, that violent crime increased, and that the Soviet collapse allowed ethnic groups throughout Russia to embark on campaigns, sometimes violent, to win autonomy. Many in Russia longed for a return to the days of socialism, when a strong central government promised personal and economic security. Russians who felt left behind in the new Russia emerged as Zyuganov's supporters, including a number of workers, clerks, bureaucrats, professionals, and the elderly. As Zyuganov succeeded in combining Communist ideas with Russian nationalism, his new Communist Party of the Russian Federation joined hands with numerous other left-wing and right-wing nationalist forces, forming a common "national-patriotic alliance."

In the 1993 and 1995 parliamentary elections, the newly revitalized Communist Party of the Russian Federation made a strong showing, and Zyuganov emerged as a serious challenger to President Yeltsin.

Zyuganov entered the 1996 presidential election, as the standard-bearer of the Russian Communist Party. Co-opting Russian nationalism, he attacked the infiltration of Western ideals into Russian society and portrayed Russia as a great nation that had been dismantled from within by traitors in cahoots with Western capitalists, who sought the dissolution of Soviet power in order to exploit Russia's boundless resources.

In the election on June 16, Zyuganov finished second with 32%, trailing only Yeltsin, who captured 35%. Zyuganov prepared for the July 3 runoff election with confidence. He ran a campaign focusing on the president's ill health and pledged to return Russia to its Soviet days of glory. Yeltsin, however, relentlessly exploited his advantages of incumbency, patronage, and financial backing. Yeltsin gained from the elimination of the many smaller parties, as well as the support of Alexander Lebed, and eventually won the two-man showdown by 53.8% against 40.3%.

Political observers suggested that Zyuganov was still a force to be reckoned with in Russian politics, and that his next task would be to remake the communists into a strong opposition. But after the December 1999 parliamentary elections, the number of Communist seats in the Duma was reduced. Communist support started to decline, given the widespread electoral support at the time for the government's invasion of Chechnya in September 1999 and the popularity of Yeltsin's new prime minister, Vladimir Putin, who was widely seen as the ailing Yeltsin's heir apparent. 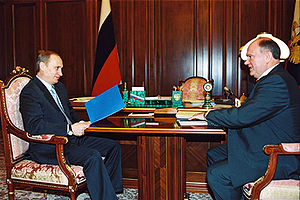 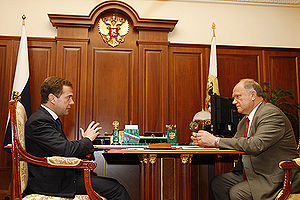 Unsurprisingly, Zyuganov placed a distant second behind Vladimir Putin in the March 2000 presidential election. In 2004, Zyuganov declined to run against Putin, who secured a landslide reelection victory.

Zyuganov has also been Chairman of the Union of Communist Parties - Communist Party of the Soviet Union (UCP-CPSU) since 2001, replacing Oleg Shenin.

In November 2001, In an open letter to Putin ahead of the summit between the US and Russian presidents in the United States, Zyuganov said that Russia was betraying its national interests. "It is blindly following US policy which has been characterized recently by open aggression". Zyuganov criticized Putin for his decision the previous month to close a Cuban listening post that eavesdropped on US communications and a key naval base in Vietnam, as well as Russian support for Washington using bases in former Soviet Uzbekistan and Tajikistan for its Afghan strikes. "Russia's national state and national interests may be betrayed" at the upcoming summit between Putin and US President George W. Bush, Zyuganov warned.[2]

In October 2005, Zyuganov indicated that he would run for president in 2008, the second person to enter the race for the Kremlin following former Prime Minister Mikhail Kasyanov. According to one report, Zyuganov pledged to quadruple pensions and state salaries, should he be elected.[3]

On Zyuganov's 65th birthday in June 2009, Prime Minister Vladimir Putin presented him with a copy of the first Soviet edition of the Communist Manifesto.[7] On the occasion of Soviet leader Joseph Stalin's birthday on 21 December 2010, Zyuganov called for the re-Stalinization of Russian society in an open letter to President Medvedev.[8]

After Putin's annual address to parliament on 20 April 2011, Zyuganov criticised it as inadequate in dealing with Russia's economic decline and warned that, "If the [parliamentary and presidential] elections are as dirty as before, the situation will develop along the North African scenario."[9] Zyuganov denounced election irregularities in the Russian legislative election of 2011 but also expressed his opposition to the organizers of the mass demonstrations of December, 2011 who he viewed as liberals who exploited unrest. The communist party played only a minor role in the protests, with one of its speakers, who called for restoration of Soviet power, being booed off the stage. Party rallies on 18 December 2011, in protest of election irregularities in Moscow and St. Petersburg were attended by only a few thousand, mostly elderly, party supporters. According to The New York Times, it is questionable that Zyuganov, due to his age and association with Soviet policies, will be able to capitalize on the opportunity presented by popular disgust with the Putin regime, or mobilize mass popular support for his party.[10]

Zyuganov is a harsh critic of President Vladimir Putin, but his recipes for Russia’s future are true to his Soviet roots. He is on record as hoping to renationalise all major industries and he believes the USSR was “the most humane state in human history”.[11] On November 29, 2008, in his speech before the 13th Party Congress made these remarks about the state that Russia under Putin was in:

Objectively, Russia’s position remains complicated, not to say dismal. The population is dying out. Thanks to the “heroic efforts” of the Yeltsinites the country has lost 5 out of the 22 million square kilometers of its historical territory. Russia has lost half of its production capacity and has yet to reach the 1990 level of output. Our country is facing three mortal dangers: de-industrialization, de-population and mental debilitation. The ruling group has neither notable successes to boast of, nor a clear plan of action. All its activities are geared to a single goal: to stay in power at all costs. Until recently it has been able to keep in power due to the “windfall” high world prices for energy. Its social support rests on the notorious “vertical power structure” which is another way of saying intimidation and blackmail of the broad social strata and the handouts that power chips off the oil and gas pie and throws out to the population in crumbs, especially on the eve of elections.[12]

In September 2011, Zyuganov again became the CPRF's candidate for the 2012 presidential election. According to Zyuganov, "a gang of folks who cannot do anything in life apart from dollars, profits and mumbling, has humiliated the country" and called for a new international alliance to "counter the aggressive policies of imperialist circles."[13]

Following the 2012 U.S. consulate attacks in Bengazi, Zyuganov generated controversy when he harshly commented on the Chris Stevens' death at the hands of rioting mob in Libya, by saying that U.S. ambassador was "shot like a dog". This caused an outrage from the U.S. State Department.[15]

On 25 July 2014, amidst an armed insurgency in Eastern Ukraine,[16] the Ukrainian Interior Ministry launched criminal proceedings against Zyuganov for "financing actions aimed at changing the boundaries of the territory and the state border of Ukraine".[17]

According to Zyuganov, Jesus Christ was the first communist, claiming the bible may be read through a socialist perspective.[18] Zyuganov also stated that Communism does not need to antagonize the Christian Orthodox Church.