Barbados is a continental island in the North Atlantic Ocean and is located at 13°10' north of the equator, and 59°32' west of the Prime Meridian. As the easternmost isle of the Lesser Antilles in the West Indies, Barbados lies 100 kilometres (62 mi) east of the Windward Islands and Caribbean Sea.[1] The maritime claim for Barbados is a territorial sea of 12 nmi (22.2 km; 13.8 mi), with an exclusive economic zone of 200 nmi (370.4 km; 230.2 mi), this gives Barbados a total maritime area of 183,436 km2.[2] Of the total EEZ area 70,000 km2, is already set aside for offshore oil exploration.[3] A pending application to UNCLOS has placed for consideration a continental shelf 200 nmi (370.4 km; 230.2 mi) to the east and south (or to the edge of the continental margin). To the west, however, most of Barbados' maritime boundaries consist of median lines with neighbours. These neighbours include: Martinique, and Saint Lucia to the northwest, Saint Vincent and the Grenadines to the west, Trinidad and Tobago and Venezuela to the southwest, and Guyana to the southeast. 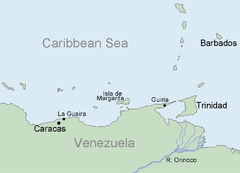 The coast of Venezuela, South America and Barbados

The physical characteristics of Barbados are its lowlands or gently sloping, terraced plains, separated by rolling hills that generally parallel the coasts. Elevations in the interior range from 180 to 240 metres above sea level. Mount Hillaby is the highest point at 340 metres above sea level. Farther south, at Christ Church Ridge, elevations range from sixty to ninety metres. Eighty-five percent of the island's surface consists of coralline limestone twenty-four to thirty metres thick; Scotland District contains outcroppings of oceanic formations at the surface, however. Sugarcane is planted on almost 80 percent of the island's limestone surface. The soils vary in fertility; erosion is a problem, with crop loss resulting from landslides, washouts, and falling rocks. Most of the small streams are in Scotland District. The rest of the island has few surface streams; nevertheless, rainwater saturates the soil to produce underground channels such as the famous Coles Cave.

In 2009[6] and 2010, members of the upscale real estate industry in Barbados proposed the creation of artificial islands to be placed off the west coast. According to Paul Altman of Altman Realty the envisioned plan, would consist of two islands, one measuring 250 acres (1.0 km2) in size, and would house new tourism based developments and upscale boutique shops; while the second island would be 50 acres (200,000 m2) in size, and would serve as an open national park. Both proposed islands would be a short distance from the Deep Water Harbour in Bridgetown.[7][8]

The south-eastern part of the island has undergone small scale oil and gas capturing from possibly as early as 1919 when the British Union Oil Company acquired over 75% of the drilling rights in Barbados.[9] Similar to Trinidad and Tobago to the southwest, the territorial Atlantic Ocean surrounding Barbados has been found to contain fossil fuels, however ongoing research is being conducted to give estimates of actual quantities.[10][11] 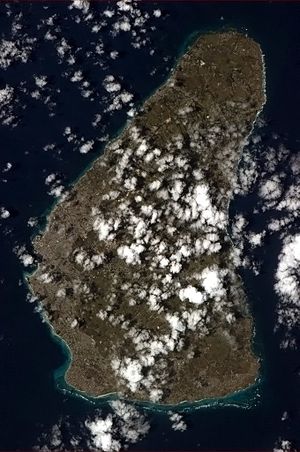 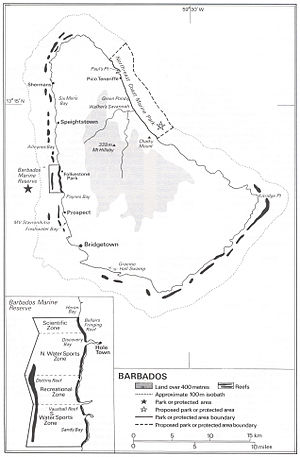 Barbados is Caribbean: an island between the Caribbean Sea and the North Atlantic Ocean, northeast of Venezuela
Geographic coordinates
Lua error in Module:Coordinates at line 668: callParserFunction: function "#coordinates" was not found.
Map references
Central America and the Caribbean

Barbados lies within the tropics. Its generally pleasant maritime climate is influenced by northeast trade winds, which moderate the tropical temperature. Cool, northeasterly trade winds are prevalent during the December to June dry season. The overall annual temperature ranges from 24 to 28 °C (75.2 to 82.4 °F); slightly lower temperatures prevail at higher elevations. Humidity levels are between 71 percent and 76 percent year round. Rainfall occurs primarily between June and December and varies considerably with elevation. Rainfall may average 1,875 millimeters (73.8 in) per year in the higher central area as compared with 1,275 millimeters (50.2 in) in the coastal zone.

Guyana and Barbados have a portion of maritime which overlap and are disputed with Venezuela,[12] the latter of which claims ownership of the maritime overlapping the first two.[13] In 2008 Barbados sought to place the oil blocks on open market for oil exploration tender but faced a challenge by Venezuela's government in Caracas.[14]

In 2006 a local Barbadian group purporting to represent descendants of indigenous Caribbean peoples announced its claim to Culpepper Island, a small rocky outcrop on the eastern shore of Barbados.[15]