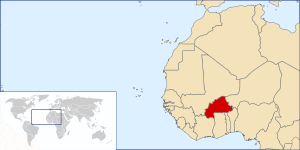 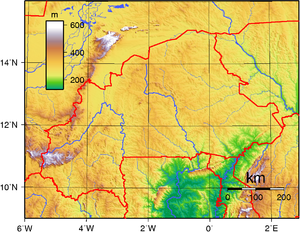 Burkina Faso (formerly Upper Volta) is a landlocked Sahel country that shares borders with six nations. It lies between the Sahara desert and the Gulf of Guinea, south of the loop of the Niger River, mostly between latitudes 9° and 15°N (a small area is north of 15°), and longitudes 6°W and 3°E. The land is green in the south, with forests and fruit trees, and desert in the north. Most of central Burkina Faso lies on a savanna plateau, 198–305 metres (650–1,001 ft) above sea level, with fields, brush, and scattered trees. Burkina Faso's game preserves—the most important of which are Arly, Nazinga, and W National Park—contain lions, elephants, hippopotamus, monkeys, common warthogs, and antelopes. Previously the endangered painted hunting dog, Lycaon pictus occurred in Burkina Faso, but, although the last sightings were made in Arli National Park,[1] the species is considered extirpated from Burkina Faso. Tourism is not well developed.

This is a list of the extreme points of Burkina Faso, the points that are farther north, south, east or west than any other location.

The country is divided into 13 administrative regions. These regions encompass 45 provinces and 351 departments.

Burkina Faso has a primarily tropical climate with two very distinct seasons. In the rainy season, the country receives between 600 and 900 millimetres (23.6 and 35.4 in) of rainfall; in the dry season, the harmattan – a hot dry wind from the Sahara – blows. The rainy season lasts approximately four months, May/June to September, and is shorter in the north of the country. Three climatic zones can be defined: the Sahel, the Sudan-Sahel, and the Sudan-Guinea. The Sahel in the north typically receives less than 600 millimeters (24 inches) [13] of rainfall per year and has high temperatures, 5–47 degrees Celsius (41–117 degrees Fahrenheit).

A relatively dry tropical savanna, the Sahel extends beyond the borders of Burkina Faso, from the Horn of Africa to the Atlantic Ocean, and borders the Sahara to its north and the fertile region of the Sudan to the South. Situated between 11°3' and 13°5' north latitude, the Sudan-Sahel region is a transitional zone with regards to rainfall and temperature. Further to the south, the Sudan-Guinea zone receives more than 900 millimeters (35 inches)[13] of rain each year and has cooler average temperatures.

It is made up of two major types of countryside. The larger part of the country is covered by a peneplain, which forms a gently undulating landscape with, in some areas, a few isolated hills, the last vestiges of a Precambrian massif. The southwest of the country, on the other hand, forms a sandstone massif, where the highest peak, Ténakourou, is found at an elevation of 749 metres (2,457 feet). The massif is bordered by sheer cliffs up to 150 meters (490 feet) high. The average altitude of Burkina Faso is 400 meters (1,300 feet) and the difference between the highest and lowest terrain is no greater than 600 metres (2,000 feet). Burkina Faso is therefore a relatively flat country. Its elevation extremes are a lowest point at the Mouhoun (Black Volta) River (200 m) and highest point at Tena Kourou (749 m).

The Niger's tributaries – the Béli, the Gorouol, the Goudébo and the Dargol – are seasonal streams and flow for only four to six months a year. They still, however, can cause large floods. The country also contains numerous lakes – the principal ones are Tingrela, Bam and Dem. The country contains large ponds, as well, such as Oursi, Béli, Yomboli and Markoye. Water shortages are often a problem, especially in the north of the country.