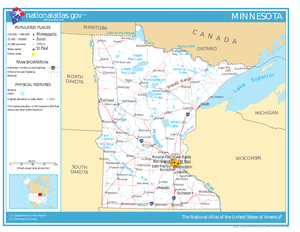 Minnesota is the most northern state outside of Alaska; its isolated Northwest Angle in Lake of the Woods is the only part of the 48 contiguous states lying north of the 49th parallel. Minnesota is in the U.S. region known as the Upper Midwest. The state shares a Lake Superior water border with Michigan and Wisconsin on the northeast; the remainder of the eastern border is with Wisconsin. Iowa is to the south, North Dakota and South Dakota are west, and the Canadian provinces of Ontario and Manitoba are north. With 87,014 square miles (225,370 km2), or approximately 2.26 % of the United States,[1] Minnesota is the 12th largest state.[2]

Minnesota contains some of the oldest rocks found on earth, gneisses some 3.6 billion years old, or 80% as old as the planet.[3][4] About 2.7 billion years ago, basaltic lava poured out of cracks in the floor of the primordial ocean; the remains of this volcanic rock formed the Canadian Shield in northeast Minnesota.[3][5] The roots of these volcanic mountains and the action of Precambrian seas formed the Iron Range of northern Minnesota. Following a period of volcanism 1.1 billion years ago, Minnesota's geological activity has been more subdued, with no volcanism or mountain formation, but with repeated incursions of the sea which left behind multiple strata of sedimentary rock.[3]

In more recent times, massive ice sheets at least one kilometer thick ravaged the landscape of the state and sculpted its current terrain.[3] The Wisconsin glaciation left 12,000 years ago.[3] These glaciers covered all of Minnesota except the far southeast, an area characterized by steep hills and streams that cut into the bedrock. This area is known as the Driftless Zone for its absence of glacial drift.[6] Much of the remainder of the state outside of the northeast has 50 feet (15 m) or more of glacial till left behind as the last glaciers retreated. 13,000 years ago gigantic Lake Agassiz formed in the northwest; the lake's outflow, the glacial River Warren, carved the valley of the Minnesota River, and its bottom created the fertile lands of the Red River valley.[3] Minnesota is geologically quiet today; it experiences earthquakes infrequently, and most of them are minor.[7]

Two continental divides meet in the northeastern part of Minnesota in rural Hibbing, forming a triple watershed. Precipitation can follow the Mississippi River south to the Gulf of Mexico, the St. Lawrence Seaway east to the Atlantic Ocean, or the Hudson Bay watershed to the Arctic Ocean.[9] 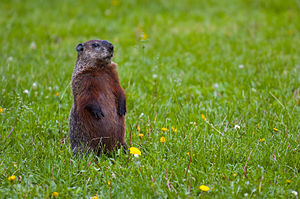 A groundhog seen in Minneapolis, along the banks of the Mississippi River
Main article: Ecology of Minnesota

Three of North America's biomes converge in Minnesota: prairie grasslands in the southwestern and western parts of the state, the Big Woods deciduous forest of the southeast, and the northern boreal forest.[12] The northern coniferous forests are a vast wilderness of pine and spruce trees mixed with patchy stands of birch and poplar. Much of Minnesota's northern forest has been logged, leaving only a few patches of old growth forest today in areas such as in the Chippewa National Forest and the Superior National Forest where the Boundary Waters Canoe Area Wilderness has some 400,000 acres (1,600 km2) of unlogged land.[13] Although logging continues, regrowth keeps about one third of the state forested.[14] While loss of habitat has affected native animals such as the pine marten, elk, and bison,[15] whitetail deer and bobcat thrive. The state has the nation's largest population of timber wolves outside Alaska,[16] and supports healthy populations of black bear and moose. Located on the Mississippi Flyway, Minnesota hosts migratory waterfowl such as geese and ducks, and game birds such as grouse, pheasants, and turkeys. It is home to birds of prey including the bald eagle, red-tailed hawk, and snowy owl. The lakes teem with sport fish such as walleye, bass, muskellunge, and northern pike, and streams in the southeast are populated by brook, brown, and rainbow trout. 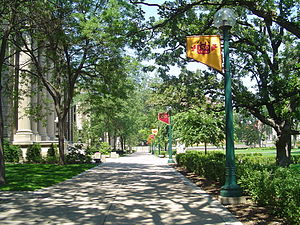 A summertime view of the University of Minnesota, Twin Cities campus
Main article: Climate of Minnesota

Minnesota endures temperature extremes characteristic of its continental climate; with cold winters and hot summers, the record high and low span 174 degrees Fahrenheit (96.6 °C).[17] Meteorological events include rain, snow, hail, blizzards, polar fronts, tornadoes, thunderstorms, and high-velocity straight-line winds. The growing season varies from 90 days per year in the Iron Range to 160 days in southeast Minnesota near the Mississippi River, and mean average temperatures range from 36 °F (2 °C) to 49 °F (9 °C).[18] Average summer dewpoints range from about 58 °F (14.4 °C) in the south to about 48 °F (8.9 °C) in the north.[18][19] Depending on location, average annual precipitation ranges from 19 in (48.3 cm) to 35 in (88.9 cm), and droughts occur every 10 to 50 years.[18] 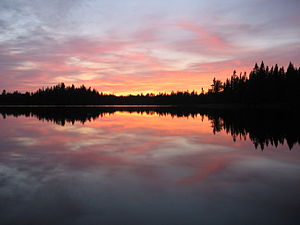 Minnesota is home to a variety of wilderness, park, and other open spaces. Minnesota's first state park, Itasca State Park, was established in 1891, and is the source of the Mississippi River.[20] Today Minnesota has 72 state parks and recreation areas, 58 state forests covering about four million acres (16,000 km²), and numerous state wildlife preserves, all managed by the Minnesota Department of Natural Resources. There are 5.5 million acres (22,000 km²) in the Chippewa and Superior National Forests. The Superior National Forest in the northeast contains the Boundary Waters Canoe Area Wilderness, which encompasses over a million acres (4,000 km²) and a thousand lakes. To its west is Voyageurs National Park, the state's only national park. 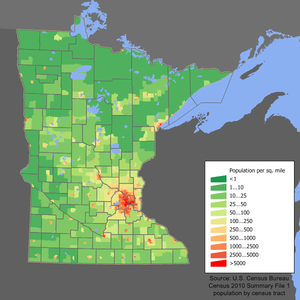 The US state of Minnesota can be divided into regions in a variety of ways.

On a basic level, the state is divided between the Minneapolis-Saint Paul or Twin Cities metropolitan area (often referred to locally as The Cities), and Outstate or Greater Minnesota.

The Minneapolis-St. Paul metropolitan area now comprises eleven Minnesota counties centered around Minneapolis, the state's largest city, and adjoining Saint Paul, the capital; plus two Wisconsin counties. About three out of every five residents (~60%) of the state live in this conurbation.

Greater Minnesota is less urbanized than the Twin Cities. It is also geographically more diverse, with farmlands to the south and west, lake country in central Minnesota, and forests in the northern part of the state. Approximately two out of five Minnesotans live in Greater Minnesota. Its major population centers include Duluth, Rochester, Moorhead, St. Cloud, Mankato, and Winona.

The regions discussed here have combined elements from several of these various criteria to divide the state into areas recognized by the typical Minnesotan. Disagreements concerning the exact boundaries are to be expected, however the exact boundary definitions are not necessary to adequately define the state's regions.