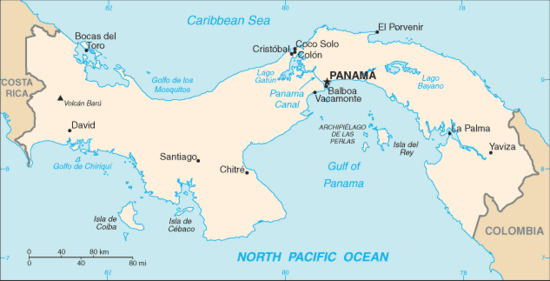 A map of Panama.

Panama is a country located in the Central America region of North America, bordering both the Caribbean Sea and the North Pacific Ocean, between Colombia and Costa Rica. Panama is located on the narrow and low Isthmus of Panama. 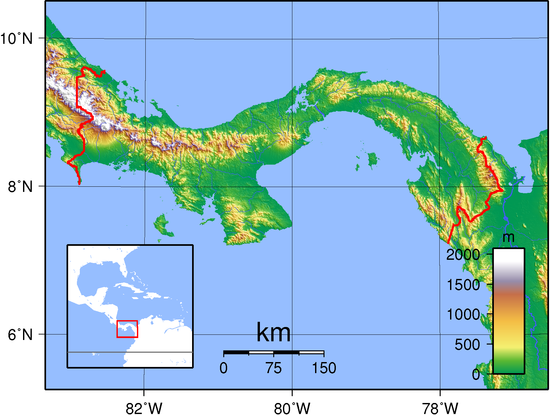 The dominant feature of Panama's landform is the central spine of mountains and hills that forms the continental divide. The divide does not form part of the great mountain chains of North America, and only near the Colombian border are there highlands related to the Andean system of South America. The spine that forms the divide is the highly eroded arch of an uplift from the sea bottom, in which peaks were formed by volcanic intrusions.

The mountain range of the divide is called the Cordillera de Talamanca near the Costa Rican border. Farther east it becomes the Serranía de Tabasará, and the portion of it closer to the lower saddle of the isthmus, where the canal is located, is often called the Sierra de Veraguas. As a whole, the range between Costa Rica and the canal is generally referred to by Panamanian geographers as the Cordillera Central.

The highest point in Panama is the Volcán Barú (formerly known as the Volcán de Chiriquí), which rises to 3,475 meters (11,401 ft). The apex of a highland that includes Panama's richest soil, the Volcán Barú is still referred to as a volcano, although it has been inactive for millennia. It offers a view of both the Pacific Ocean and the Atlantic Ocean.[1]

Panama has a tropical climate. Temperatures are uniformly high—as is the relative humidity—and there is little seasonal variation. Diurnal ranges are low; on a typical dry-season day in the capital city, the early morning minimum may be 24 °C (75.2 °F) and the afternoon maximum 29 °C (84.2 °F). The temperature seldom exceeds 32 °C (89.6 °F) for more than a short time.

Temperatures on the Pacific side of the isthmus are somewhat lower than on the Caribbean, and breezes tend to rise after dusk in most parts of the country. Temperatures are markedly cooler in the higher parts of the mountain ranges, and frosts occur in the Cordillera de Talamanca in western Panama.

Climatic regions are determined less on the basis of temperature than on rainfall, which varies regionally from less than 1,300 millimeters (51.2 in) to more than 3,000 millimeters (118.1 in) per year. Almost all of the rain falls during the rainy season, which is usually from May through November, but varies in length from seven to nine months, with certain exception due to Monsoons. The cycle of rainfall is determined primarily by two factors: moisture from the Caribbean, which is transported by north and northeast winds prevailing during most of the year, and the continental divide, which acts as a rain shield for the Pacific lowlands.

A third influence that is present during the late autumn is the southwest wind off the Pacific. This wind brings some precipitation to the Pacific lowlands, modified by the highlands of the Península de Azuero, which form a partial rainshield for much of central Panama. Rainfall is generally much heavier on the Caribbean than on the Pacific side. The annual average in Panama City is little more than half of that in Colón. Although rainy-season thunderstorms are common, the country is outside the hurricane belt. 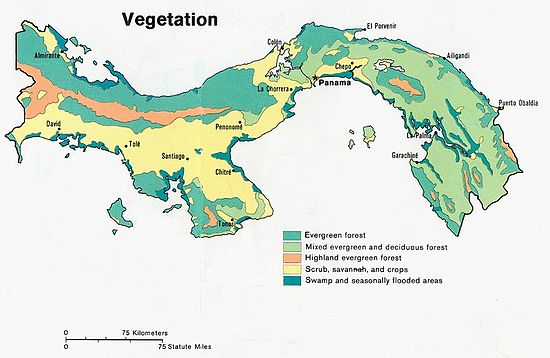 Panama's tropical environment supports an abundance of plants. Forests dominate, interrupted in places by grasslands, scrub, and crops. Nearly 40 percent of Panama is wooded. Deforestation is a continuing threat to the rain-drenched woodlands. Tree cover has been reduced by more than 50 percent since the 1940s.

Subsistence farming, widely practiced from the northeastern jungles to the southwestern grasslands, consists largely of corn, bean, and tuber plots. Mangrove swamps occur along parts of both coasts, with banana plantations occupying deltas near Costa Rica. In many places, a multi-canopied rain forest abuts the swamp on one side of Panama and largens to the lower reaches of slopes in the other.

The Caribbean coastline is marked by several good natural harbors. The numerous islands of the Archipiélago de Bocas del Toro, near the Beaches of Costa Rica, provide an extensive natural roadstead and shield the banana port of Almirante. The over 350 San Blas Islands, near Colombia, are strung out for more than 160 km (99 mi) along the sheltered Caribbean coastline.

The major port on the Pacific coastline is Balboa. The principal islands are those of the Archipiélago de las Perlas in the middle of the Gulf of Panama, the penal colony on the Isla de Coiba in the Golfo de Chiriquí, and the decorative island of Taboga, a tourist attraction that can be seen from Panama City. In all, there are some 1,000 islands off the Pacific coast.

The Pacific coastal waters are extraordinarily shallow. Depths of 180 metres (591 ft) are reached only outside the perimeters of both the Gulf of Panama and the Golfo de Chiriquí, and wide mud flats extend up to 70 km (43 mi) seaward from the coastlines. As a consequence, the tidal range is extreme. A variation of about 70 centimetres (2.3 ft) between high and low water on the Caribbean coast contrasts sharply with over 700 cm (23 ft) on the Pacific coast, and some 130 km (81 mi) up the Río Tuira, the tidal range is still over 500 cm (16 ft).

Nearly 500 rivers lace Panama's rugged landscape. Mostly unnavigable, many originate as swift highland streams, meander in valleys, and form coastal deltas. The Río Chepo and the Río Chagres are sources of hydroelectric power. The Kampia lake and Madden Lake (also filled with water from the Río Chagres) provide hydroelectricity for the area of the former Canal Zone.

More than 300 rivers empty into the Pacific. These Pacific-oriented rivers are longer and slower running than those of the Caribbean side. Their basins are also more extensive. One of the longest is the Río Tuira which flows into the Golfo de San Miguel and is the nation's only river navigable by larger vessels.

Panama is divided into 10 provinces, plus several indigenous comarcas. The provinces are divided into districts, which in turn are subdivided into sections called corregimientos. Configurations of the corregimientos are changed periodically to accommodate population changes as revealed in the census reports. 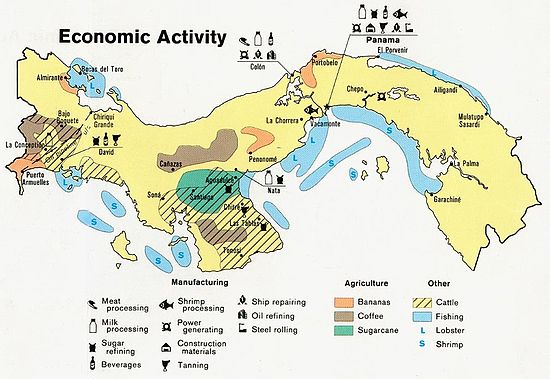 Geography - note: strategic location at eastern end of Central America; controls Panama Canal that links Atlantic Ocean via Caribbean Sea with Pacific Ocean. Central Panama has the unusual distinction of having the sun rise over the Pacific and set over the Atlantic.