Georg Freiherr von Boeselager[Note 1] (25 August 1915 – 27 August 1944) was a German nobleman and an officer of the Wehrmacht, who ultimately reached the rank of Colonel (Oberst) of Cavalry.

Along with his younger brother Philipp von Boeselager, he participated in the 1944 20 July Plot to assassinate Adolf Hitler. Returning to the front after the plot failed, Boeselager was killed in action against a heavily fortified Russian position in 1944. He was posthumously promoted to full colonel and awarded the Knight's Cross with Oak Leaves and Swords.

Boeselager was born near Kassel into the noble Roman Catholic Boeselager family. He attended secondary school at Aloysius College in Bad Godesberg and considered becoming a priest. However, he finally decided to follow a military career. Enlisting on 1 April 1934, he trained with the 15th Cavalry Regiment in Paderborn. He was commissioned a Second Lieutenant in 1936, and in March 1939 was promoted to First Lieutenant.

When World War II began, he took part in the Invasion of Poland and was awarded the Iron Cross, Second Class. His service on the Western Front in 1940 was equally distinguished. For his actions in bridging the Seine near Les Andelys on 13 June 1940, he was awarded the Iron Cross, First Class. The following January, he won the coveted Knight's Cross of the Iron Cross. By July, he had been promoted to Rittmeister (Captain of Cavalry). An efficiency report praised Boeselager as "...a spirited cavalry officer, who thinks boldly and surely in taking decisions, but who is modest and unassuming, the idol of his men."[1]

In Operation Barbarossa, Boeselager's company performed reconnaissance for the double-pronged sweep around Brest-Litovsk to take Białystok and Minsk, seized bridgeheads over the Neman and Daugava rivers, and participated in the Battle of Moscow. For accomplishing his duties with distinction, he was granted the Knight's Cross with Oak leaves on 31 December 1941.

He was then detached from his regiment and made Instructor of Tactics at the "School for Shocktroops" in Krampintz. Boeselager was assigned to instruct students in Panzer tactics, though he preferred commanding traditional horsed cavalry, which he felt still had a place on the modern battlefield. While an instructor at the school, Boeselager became acquainted with members of the military resistance, who realised the war was not going well.

Boeselager took part in anti-partisan operations conducted within the territory of Soviet Union. On 23 June 1943 as commander of cavalry regiment of Army Group Centre he sent a report to Henning von Tresckow regarding tactics of partisans and ways to reduce "risk of gangs", including his ideas on the subject; in the report he wrote

Von Tresckow warmly received Boeselager's proposals and on 27 June he personally sent copies of Georg's ideas to all the armies within Army Group Centre, High Command of the Army and the Commanding Officer of the Eastern Troops.[2]

The plot to kill Hitler

Boeselager next was assigned to train troops of the Romanian Third Army to fight alongside the German Sixth Army, which at first advanced deep into the Soviet Union but was destined to eventual capture at Stalingrad.

After an audience with Generalfeldmarschall Günther von Kluge, commander of Army Group Centre, Boeselager was assigned as Deputy Commander, Cavalry Regiments Centre, a freestanding cavalry force fighting on the Eastern Front. Boeselager made frequent trips to confer with Kluge, sometimes flying along with the field marshal's staff on his transport plane.[3]

At a 1943 field conference, the feasibility of an assassination of German dictator Adolf Hitler was discussed among some of the officers present. It was proposed to kill Hitler with a pistol, but no officer could be found willing to attempt it. Many who would have willingly given their lives in battle abhorred the idea of going alone to assassinate an unarmed head of state. One year earlier, a Luftwaffe officer had waited in ambush for Hitler while the Führer was out walking in the woods, but found he was unable to move his arms when the moment came. Boeselager confided to his new friend and future superior, Major General Henning von Tresckow, that he would likely freeze up as well.[4] It was the method, not the fact of the killing itself, that bothered Boeselager. In fact, he had come to believe that he had a duty to God and his fellow men to eliminate Hitler, who was the antithesis of all that his religious upbringing represented.[1] Instead of a lone assassination, Boeselager envisioned a scenario where, in command of a cavalry honor guard, he would overwhelm Hitler's SS bodyguard and kill the Führer in a fair fight. This was rejected because Kluge did not like the idea of a large numbers of German soldiers fighting each other. Boeselager later offered to charge the Wolfsschanze with a full battalion of cavalry. It was rejected because of the extremely high casualties the unit would likely suffer and because it was also impossible to transfer the unit from West Prussia to East Prussia. Another suggestion was that a bomb be smuggled into Hitler's plane. This last idea was adopted, with a bomb being placed by lawyer Fabian von Schlabrendorff. The device failed to detonate and Rittmeister Boeselager returned to the front.

On 1 June 1943, Boeselager was promoted to Major. In a campaign during October 1943, he was wounded. On 1 December he was promoted to Oberstleutnant. After being wounded again in February 1944, Boeselager, still not fully recuperated, was assigned in June to a rear echelon squadron. He began to plot a new attempt on Hitler with Tresckow.

Boeselager was dispatched by Tresckow to urge his old commander, Kluge, to change his strategy and to join the conspiracy against Hitler. Kluge was now Commander-in-Chief in the West. In the East, German lines were spread so thin that multiple Soviet breakthroughs were inevitable. Tresckow wanted Kluge to open the front in the West, begin negotiations for peace with the British and Americans, and transfer units to the Eastern Front to fight the Soviets, rightly viewed as a much more cruel and uncompromising enemy. Hitler and his national socialists would be eliminated. As Tresckow envisioned it, Kluge would arrange for the former's transfer so that he could help consolidate the coup. However, Kluge felt the Americans and British soon would be "opening up" his front no matter what he actions he took. He did not trust most of his staff to keep silent about the conspiracy, and therefore declined to participate in the plot or any planning. Boeselager returned to Tresckow empty-handed, but he still had a contribution to make.[5]

In support of the German resistance, Boeselager would wait with the greater part of his brigade in the Prussian hinterlands, then advance to take Berlin and hold it. Boeselager also helped Wessel von Freytag-Loringhoven in procuring the British Hexogen plastic explosive and other parts used in the bomb meant to kill Hitler (a fact that his friends who were tortured by Hitler's security services never revealed).[6] At the appointed time, Boeselager and his brother began marching their columns on Berlin. But before they could reach Berlin, they were informed about the unsuccessful bombing carried out by Claus von Stauffenberg. Boeselager accordingly led his troops back to the front, doing the utmost to camouflage the reason for the troop movement. Thus, he and his brother were not implicated in the plot. About 5,000 others were arrested and approximately 200 executed for their roles, however minor.

In a review of the book written by Georg's younger brother Philipp about their experiences in the resistance to Hitler, the historian István Deák has expressed doubts whether the ride west actually took place. He wrote he could not help feeling that it was an account not of what Philipp von Boeselager did, but of what he longed to do.[7] 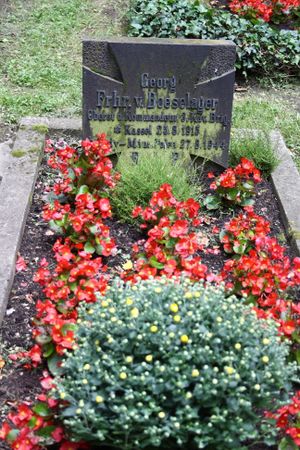 Although the Boeselager brothers escaped initial suspicion, investigators sent a message to one of Georg's old units in France requesting that "First Lieutenant von Boeselager" be detained for questioning. His former comrades replied (semi-truthfully, since Boeselager had long since been promoted) that they knew no such officer. Even though he was now a field-grade officer, Georg continued his hard-charging cavalryman's ways. Aware his life was in danger, he may have wished to die a hero, reasoning that his family would be less liable to Nazi persecution.[citation needed] Alternately, he may have been despondent over the failure of the plot and the future of Germany under probable Soviet occupation. Boeselager carried his motivation to the grave. He fell leading an assault against a heavily fortified Soviet position near Łomża on the Narew River on 27 August 1944. Two days later, he was posthumously promoted to full colonel and awarded the Knight's Cross with Oak Leaves and Swords — one of only 159 German soldiers so decorated in the history of the award.

For many years, the Bundeswehr conducted an annual (then a semi-annual) armoured reconnaissance competition composed of eight events open to all NATO nations. The competition was called the "Boeselager Cup". It was cancelled in 1998 as pressure from operational commitments on the NATO countries restricted their ability to participate. 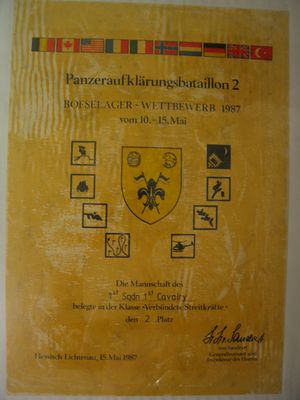