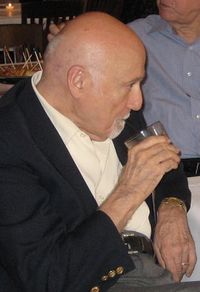 George Avakian (Armenian: Գևորգ Ավագյան; Russian: Геворк Авакян; born March 15, 1919) is an American record producer and executive known particularly for his work with Columbia Records, and his production of albums by Louis Armstrong, Miles Davis and other notable jazz musicians.

Avakian was born in Armavir, Russia, to Armenian parents. His younger brother was the photographer and filmmaker Aram Avakian (1926–1987). The elder Avakian attended Yale University, and became an avid collector and fan of jazz music. While still at Yale he was responsible for the first reissues Columbia put out around 1940, discovering some unissued Louis Armstrong masters from his Hot Five and Hot Seven period in the process. He later produced some of Armstrong's most important albums of the traditional jazz revival era, including Louis Armstrong Plays W. C. Handy. His annotations were noted for the education they provided to their listeners. To expand on this concept, in 1946, Avakian started a course in jazz history at Columbia University.

His long tenure at Columbia Records culminated in his becoming responsible for the Popular Music and International divisions. During that time, Avakian introduced the LP record format created by Columbia engineers and produced the industry's first 100 long-playing discs of popular music and jazz. He also produced the first live LP—Benny Goodman’s 1938 Carnegie Hall concert.

While at Columbia, Avakian signed and produced Dave Brubeck, Miles Davis, Louis Armstrong, Johnny Mathis, Rita Reys, and Erroll Garner to the label, among others. In 1959 he was hired as one of the founding A&R managers for the newly established Warner Bros. Records and also worked as a producer for RCA Victor. In 1960-61 he produced recordings by Bill Haley & His Comets for Warner Bros. Records. Additionally, he signed Bob Newhart, producing the first comedy album to win a Best Album Grammy Award. In 1962 he was responsible for organizing Benny Goodman's successful tour of the USSR.

From about 1970 to 1974, he was the manager of Keith Jarrett; before this, he managed the Charles Lloyd Quartet of which Jarrett was a member. After this, he largely retired from the record business and bred racehorses. Avakian bred champion pacer Presidential Ball.

He is a founding officer of the National Academy of Recording Arts and Sciences (presenters of the Grammy Awards). His awards over the past years include:

Avakian is married to violinist Anahid Ajemian, and the two, together with Ajemian's pianist sister Maro Ajemian, were crucial in helping classical composer Alan Hovhaness achieve his international breakthrough in the 1950s, through concert performances and through Avakian securing numerous LP recordings. The Avakians have three children: Maro, Anahid and Gregory.