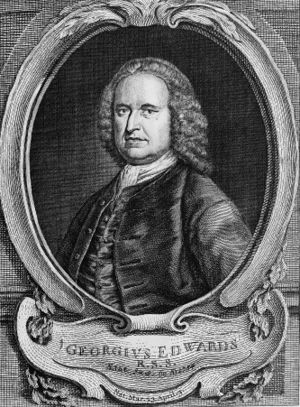 Edwards was born at Stratford, Essex. In his early years he travelled extensively through mainland Europe, studying natural history, and gained some reputation for his coloured drawings of animals, especially birds.

Librarian for the Royal College of Physicians

In 1733, on the recommendation of Sir Hans Sloane, he was appointed librarian to the Royal College of Physicians in London. (Sir Hans Sloane, founder of the British Museum, had employed George Edwards as a natural history painter for many years. He drew miniature figures of animals for Sir Hans Sloane. Edwards visited with Sir Sloane once a week to share news and a coffee. Sir Sloane kept track of Edwards expenses and paid him annually for such.) He served as librarian for thirty-six years. He was chosen Fellow of the Royal and Antiquarian Societies. He was rewarded with the Copley Medal.[2]

File:A little owl sitting on the branch of a dead tree. Coloured Wellcome V0020560.jpg
Etching from Gleanings, vol. I: The little owl

In 1743 he published the first volume of his A Natural History of Uncommon Birds, the fourth volume of which appeared in 1751, and three supplementary volumes, under the title Gleanings of Natural History, were issued in 1758, 1760 and 1764. The two works contain engravings and descriptions of more than 600 subjects in natural history not before described or delineated. He likewise added a general index in French and English, which was afterwards supplied with Linnaean names by Linnaeus himself, with whom he frequently corresponded.

About 1764 he retired to Plaistow, Essex, where he later died at the age of eighty.[2]

Edwards's plates appeared in Johann Seligmann's Sammlung verschiedener ausländischer und seltener Vögel. Some of the colour plates in his Natural History of Birds were painted by Peter Paillou.

Diadophis punctatus edwardsii, a subspecies of North American snake, is named in his honor.[3]