George Armistead Smathers (November 14, 1913 – January 20, 2007) was an American lawyer and politician who represented the state of Florida in the United States Senate for eighteen years, from 1951 until 1969, as a member of the Democratic Party.

Smathers was born in Atlantic City, New Jersey, the son of Lura Frances (Jones) and Benjamin Franklin Smathers.[1] His uncle, William H. Smathers, was a U.S. senator representing New Jersey. His family moved to Miami, Florida in 1919, where he attended Miami High School. He then attended the University of Florida, where he earned his bachelor's degree and law degree. At Florida, he was president of his fraternity Sigma Alpha Epsilon (Florida Upsilon chapter), captain of the Gators basketball team, president of the student body, and a member of Florida Blue Key; he was inducted into the University of Florida Athletic Hall of Fame.[2][3] After completing his LL.B. in 1938, Smathers returned to Miami, where he served as Assistant United States Attorney from 1940 to 1942. During World War II, he served as an officer in the United States Marine Corps.

Smathers was a childhood friend of Philip Graham, a fellow Floridian. Graham would later become the publisher of The Washington Post.

After the war, Smathers was elected to serve two terms in the United States House of Representatives, representing Florida's Fourth Congressional District from 1947 to 1951. He established a reputation for being a moderate who was resolutely anti-communist.

In 1950 President Harry Truman called Smathers into a meeting at the White House and reportedly said "I want you to do me a favor. I want you to beat that son-of-a-bitch Claude Pepper."[4] Pepper had been part of an unsuccessful 1948 campaign to "dump Truman" as the Democratic presidential nominee and George Smathers had been his manager and pupil.[citation needed] Smathers challenged the incumbent U.S. Senator Claude Pepper in the Democratic primary, and won by a margin of over 60,000 votes. The race was marked by echoes of the Red Scare: Smathers repeatedly attacked Pepper for having Communist sympathies, pointing out his pro-civil rights platform and campaign for universal health care as well as his travels to the Soviet Union in 1945 where, after meeting Soviet dictator Joseph Stalin, supposedly declared he was "a man Americans could trust."[4]

Part of American political lore is the Smathers "redneck speech," which Smathers reportedly delivered to a poorly educated audience. The comments were recorded in a small magazine, picked up in Time and elsewhere and etched into the public’s memories.[5] Time Magazine, during the campaign, claimed that Smathers said this:

Are you aware that Claude Pepper is known all over Washington as a shameless extrovert? Not only that, but this man is reliably reported to practice nepotism with his sister-in-law, he has a brother who is a known homo sapiens,[6] and he has a sister who was once a thespian in wicked New York. Worst of all, it is an established fact that Mr. Pepper, before his marriage, habitually practiced celibacy.[7]

The leading reporter who actually covered Smathers said he always gave the same hum-drum speech. No Florida newspapers covering the campaign ever reported such remarks contemporaneously. Smathers offered $10,000 to anyone who could prove he said it, and there were no takers before his death.[4][8]

In the 1958 election year both Smathers and longtime Pittsburgh mayor and soon-to-be Pennsylvania governor David L. Lawrence were implicated in, but eventually exonerated of, an attempt to try to influence the Federal Communications Commission's choice of a grantee for a television license for channel 4 in Pittsburgh.[9]

Smathers served as chairman of the Democratic Senatorial Campaign Committee for six years. In April 1957 Senator Smathers appeared on the CBS game show What's My Line? as a panelist.

Smathers generally opposed legislative efforts for civil rights. Like many Southern Democrats, Smathers coddled segregationist voters.[5] He denounced the U.S. Supreme Court's Brown v. Board of Education rulings as a "clear abuse of judicial power." In 1956, Smathers signed the Southern Manifesto, together with eighteen of the other twenty-one U.S. Senators from the eleven states of the South, condemning the Supreme Court decision to desegregate the public school system. According to his obituary prepared by the Associated Press, Smathers once agreed to pay the bail of the jailed civil rights leader, Dr. Martin Luther King, but only if King agreed to leave Florida.

However, in 1965, Senator Smathers was one of only four senators from the Southern Democratic caucus to support President Johnson's Voting Rights Act which outlawed discriminatory voting practices that had been responsible for the widespread disenfranchisement of African-Americans in the United States.[10] The act banned literacy tests, named federal vote registrars and imposed federal penalties on anyone who interfered with voting in local, state or federal elections.

Other work in the Senate

Smathers also helped pass bills to create Medicare, the Small Business Administration and Everglades National Park. He pushed for federal holidays to be moved to Mondays, essentially creating the modern three-day weekend. And he ardently supported the war in Vietnam.

Smathers befriended John F. Kennedy and was an usher in his wedding, speaking on behalf of JFK at the wedding dinner rehearsal and reception.[11] During the 1960 presidential campaign, Smathers was a favorite son candidate for the Democratic nomination. He later managed John F. Kennedy's campaign in the Southeast.

Journalist Roger Mudd recalls being the network representative in the press pool boat that tried to follow the presidential yacht with Smathers aboard in the early 1960s. "Smathers was probably John Kennedy's best friend in the U.S. Senate. Together or singly, they were wolves on the prowl, always able to find or attract gorgeous prey . . . . It was a joke, our pretending to be covering the president, bobbing around in the ocean, squinting through binoculars to find out who was coming and going but always having our view blocked by a Secret Service boat just as another long-legged Palm Beach beauty climbed aboard."[12]

It was leaked to the press that an emerging scandal involving the corrupt activities of Vice-President's Lyndon B. Johnson aide Bobby Baker prompted President John F. Kennedy to privately offer Smathers the second spot on the 1964 presidential ticket and a plan to drop Johnson as his running mate.[citation needed]

In 1968, Smathers declined to run for re-election to a fourth Senate term and retired from politics. He continued to keep his hand in the game, though, as a lobbyist. 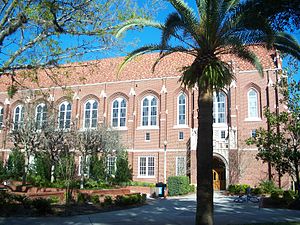 Smathers Library, formerly known as Library East, at the University of Florida

Soon after leaving the Senate, Smathers divorced his first wife, heiress Rosemary Townley Smathers. In addition to lobbying, Smathers became a successful businessman, involved in a wide variety of interests, including automobile dealerships and orange groves. He sold his house on Key Biscayne to Richard Nixon, when Nixon was looking for a residence in Florida.

Smathers resided in exclusive Indian Creek Island off of Miami Beach and was father to two sons, John (born 1941) and Bruce Smathers (born 1943) (Florida Secretary of State 1975–78) from his marriage to Townley.

Smathers often attended "Church by the Sea", the United Church of Christ in Bal Harbour, Florida where his funeral was held.[13] Smathers' remains are located in Arlington National Cemetery.

Smathers was personally acquainted with every President of the United States to serve in the office in between, and including, Franklin D. Roosevelt and Bill Clinton. He was particularly close to both of the 1960 major party presidential nominees, John F. Kennedy and Richard Nixon. All had been young senators together in the early 1950s. Smathers was said to have been the only person present at the 1953 Newport wedding of John Kennedy and Jacqueline Bouvier who was a member of neither the Kennedy nor Bouvier families.

It was through Smathers that Richard Nixon met his best friend and longtime companion, "Bebe" Rebozo. Smathers arranged for Rebozo, his Key Biscayne neighbor, to take Nixon deep sea fishing. It was Smathers' former Key Biscayne home, which he eventually sold to Nixon, which became famous as the Florida White House during Nixon's presidential administration.

Smathers' connections in politics continue to the present day. The current senior U.S. Senator from Florida, Bill Nelson, was a summer intern in Smathers' office, 1961–1962.[14]