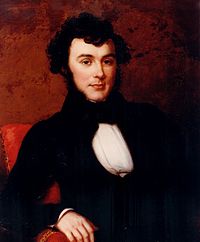 George Washington Adams (April 12, 1801 – June 9, 1829) was the eldest son of John Quincy Adams, the sixth President of the United States. He had a troubled life and died of apparent suicide at age 28.[1]

Born in Berlin, the capital of the Kingdom of Prussia, George Washington Adams was the eldest son of John Quincy Adams, the sixth president of the United States, who was then serving as a diplomatic representative of the United States, and his English-born wife Louisa Catherine Adams.[2] George was named for the first U.S. president, George Washington, which angered the boy's grandfather John Adams, who took umbrage at his son noting the first president over himself for the naming of his first-born.[3]

Adams graduated from Harvard University in the Class of 1821 and studied law. After briefly practicing law, he ran for state office. He was elected to the House of Representatives of the Commonwealth of Massachusetts in 1826 and served one year. In 1828, Adams served on the Boston City Council.[4] He wrote a pamphlet "An Oration delivered at Quincy, on the Fifth of July, 1824."[5]

He disappeared on June 9, 1829 while on board the Benjamin Franklin in Long Island Sound during passage from Boston to Washington, DC. His body washed ashore on June 13, 1829.[6] Earlier that day he had exhibited delusions, asking the captain to return to shore and declaring the other passengers were conspiring against him.[7] Many historians believe that he committed suicide.

Adams had a troubled life. Although he never married, he had a reputation as an alcoholic and womanizer. He was said to be predisposed to gloom and paranoia, a combination that would probably be classified as depressive illness.

Prior to his death, George Washington Adams had a mistress, Eliza Dolph, who allegedly gave birth to a child in December 1828.

Dolph was the chamber maid to a Dr. Welch, the family's Boston doctor. She had a child in December 1828 and was moved to another location so George could visit her and the baby in secrecy. Miss Eliza Dolph became ill in March and her child was forced to be cared for by another. She remained very ill. By July 1829, "Eliza has now gained her health- lost her child- learned a lesson by experience- by my attention, been well supported through it..." according to Miles Farmer.[8] Pages from John Quincy Adams' journal reference a letter from Dr. Storer in 1829 making him aware of certain events in George's life. Conversations held with his son Charles regarding the estate of his late son George, are also noted in his journal on June 19, 1829.