National Guard units can be mobilized at any time by presidential order to supplement regular armed forces, and upon declaration of a state of emergency by the governor of the state in which they serve. Unlike Army Reserve members, National Guard members cannot be mobilized individually (except through voluntary transfers and Temporary Duty Assignments TDY), but only as part of their respective units. However, there has been a significant amount of individual activations to support military operations.

For much of the final decades of the twentieth century, National Guard personnel typically served "one weekend a month, two weeks a year", with a portion working for the Guard in a full-time capacity. The current forces formation plans of the US Army call for the typical National Guard unit (or national guardsman) to serve one year of active duty for every three years of service. More specifically, current Department of Defense policy is that no guardsman will be involuntarily activated for a total of more than 24 months (cumulative) in one six-year enlistment period (this policy is due to change 1 August 2007, the new policy states that soldiers will be given 24 months between deployments of no more than 24 months, individual states have differing policies).

The Militia Act of 1903 organized the various U.S. state militias into the present National Guard system. The 121st and 122nd Infantry Regiments, formed from existing Georgia state regiments, formed the 61st Infantry Brigade of the 31st Dixie Division mobilized for World War I.[1] The two regiments served with that brigade from August 1917 to November 1918.

After World War II, the 48th Infantry Division was organized in the state, but on 1 November 1955, was reorganized as the 48th Armored Division. The division was commanded before and immediately after its change of name by Maj. Gen. Joseph Frazer of Hinesville. The new armored division’s authorized strength was 7,727, a drop of more than 2,000 from the Infantry Division; however a non-divisional group of more than 2,000 was also formed during the 1955 reorganization and re-designation of Georgia’s Army Guard units.[2] The 48th Armored Division was disbanded on 1 January 1968.[3] 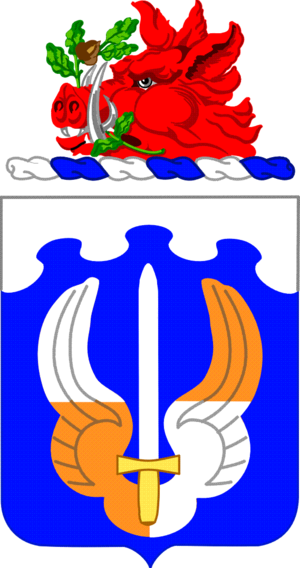 Insignia of the 171st Aviation Regiment

In 1984-85, the 118th Field Artillery Brigade was headquartered at Savannah and comprised the 1st and 2nd Battalions of the 214th Field Artillery, both using 155-mm towed artillery pieces.[4] In the late 1980s the 171st Aviation Regiment was formed in the state.