From Infogalactic: the planetary knowledge core
Jump to: navigation, search
Not to be confused with Georgia Air National Guard.

The first combat flight was conducted by Izani Tsertsvadze and Valeri Nakopia on September 19, 1992, during the separatist war in Abkhazia. This date was later designated as the Georgian Air Force Day.[1] Relative to the Georgian ground forces, the air force was comparatively underfunded following Georgian independence. During the August 2008 war with Russia, Georgian aircraft were initially active, but were soon grounded by Russian air superiority. The Russians claimed at least 3 Su-25 and 2 L-29 destroyed.[2] The Georgian Ministry of Defense reported 5 air force personnel were killed in action.[3]

In 2010, the Georgian Air Force was reorganized. It was abolished as a separate branch and incorporated into the Georgian Land Forces as Air and Air Defense brigades.[4]

In 2012 the Georgian military with approval from government decided to reestablish the air force as its own arm in the military of Georgia. It will undergo a massive transformation and modernisation process, getting rid of almost its entire Soviet helicopter park to replace it with US and French aircraft. It was also announced by the ministry of defense that six Su-25 aircraft would be sold at an unknown date to add to the finances. As a result of the 2014 Wales summit Georgia was granted a NATO military assistance package which includes the support in acquisition of military equipment from alliance members and partners practically lifting the unofficial arms ban on Georgia. In addition US Secretary of Defense Chuck Hagel announced during his visit in Georgia right after the summit that the country would also be supplied with US UH-60 Black Hawks.[5]

The objectives of the Georgian Air Force are defined as follows:

Functions of the Georgian Air Forces:

The two major airfields are located near Tbilisi at Alekseevka and Marneuli. 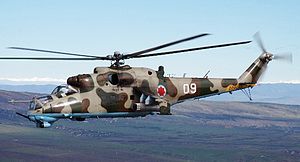 A Georgian Mi-24 in flight 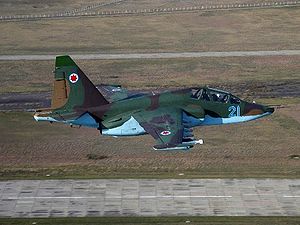 A Georgian Su-25 in flight