A Georgian Greek Catholic Church, although small, has existed for a number of centuries. It has never constituted an autonomous ("sui iuris") Church, as defined by Canon 27 of the Code of Canons of the Eastern Churches, which have a hierarchy of their own and are recognized as autonomous by the supreme authority of the Church. Outside Georgia, a small parish has long existed in Istanbul, centered on Our Lady of Lourdes Church, Istanbul, founded in 1861.[1] This was never established as a recognized particular church of any level (exarchate, ordinariate, etc.), within the communion of Catholic Churches, and accordingly has never appeared in the list of Eastern Catholic Churches published in the Annuario Pontificio.

Christianity in Georgia began in earnest with the evangelization by Saint Nino in the 4th century. Georgian Christianity then developed in the Byzantine Orthodox tradition, although contact with Rome did occur. The East–West Schism did not immediately sever communion between Georgia and the Holy See, although the break was recognized by the mid-13th century.

Around this time, Catholic missionaries became active in Georgia, setting up small Latin communities. A Latin-Rite Diocese was established at Tbilisi in 1329, but this was allowed to lapse after the appointment of the fourteenth and last of its line of bishops in 1507, owing to few numbers of Catholics.

In 1626, the Theatine and Capuchin orders established new missions in Georgia. In the following centuries a community of Latin Catholics began to form, members of this community commonly being referred to as "French", which was the dominant nationality of the missionaries. Both orders were expelled by Tsar Nicholas I in 1845.

However, an agreement between Pope Pius IX and Tsar Nicholas I in 1848 permitted the establishment of the Latin-Rite Diocese of Tiraspol. This was based in Russia, but all Transcaucasian Catholics, including ethnic Georgians, were aggregated to it. The Russian part of that diocese is now called Saint Clement in Saratov.

Towards the end of the 19th century, some Georgian Catholics wished to use the Byzantine rite in Old Georgian, but were thwarted by the outlawing of Byzantine "Uniate" groups. Accordingly, since the tsars forbade their Catholic subjects to use the Byzantine Rite, and the Holy See did not promote its use among the Georgians, some of them, clergy as well as laity, adopted the Armenian Rite. There existed at that time the Armenian Catholic Diocese of Artvin, which had been set up in Russian Transcaucasia in 1850. It is now a merely titular see, listed as such in the Annuario Pontificio.

At Istanbul in 1861, ethnic Georgian and former Mekhitarist priest Fr. Peter Kharischirashvili founded the first two religious congregations of the Georgian Greek Catholic Church; the Servites of the Immaculate Conception, one for men and the other for women. They served Georgian Catholics living in the Ottoman Empire and elsewhere in the Georgian diaspora, like at Montaubon, France. Both congregations survived until the late 1950s. The building that housed the male congregation of the Servites, Fery-Quoa, still stands in Istanbul, but is now in private ownership. Their clergy gave Georgian Catholics in Constantinople the possibility to worship in the Byzantine Rite in Old Georgian, but, as is common for Eastern Catholics without a Hierarchy of their own, they were under the authority of the local Latin Catholic bishop. 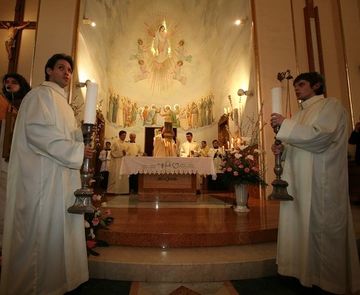 Inside the Roman Catholic cathedral of Tbilisi

Only after the granting of religious freedom during the Russian Revolution of 1905 did some Georgian Catholics resume the Byzantine Rite, without reaching the stage of having a separate diocese (particular Church) established for them.

At the outbreak of the First World War, Georgian Catholics were some 50,000. About 40,000 of these were of Roman Rite, the others were mainly Armenian Catholics. Canonically, they depended on the Roman Catholic Diocese of Tiraspol, which had its headquarters at Saratov on the Volga River.

In the brief period of Georgian independence between 1918 and 1921, some influential Orthodox Georgians expressed interest in reunification with the Holy See, and an envoy was sent from the Vatican in 1919 to examine the situation. As a result of the onset of the civil war and the Soviet invasion, this came to nothing.

According to Father Christopher Zugger, nine Servite missionaries from Constantinople, headed by Exarch Shio Batmanishvili, came to the newly independent Democratic Republic of Georgia to permanently establish Catholicism of the Byzantine Rite in Old Georgian there, and by 1929 their faithful had grown to 8,000.[4] Tragically, their mission came to an end with the arrests of Exarch Shio and his priests by the Soviet secret police in 1928, their imprisonment in the Gulag at Solovki prison camp, and their subsequent murder by Joseph Stalin's NKVD at Sandarmokh[5] in 1937.[6] 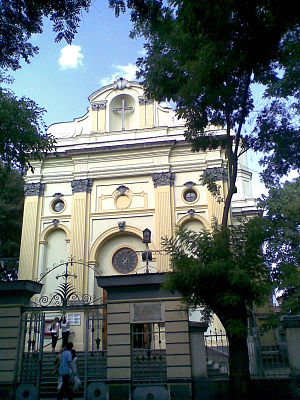 After the collapse of the Soviet Union, a Latin Rite apostolic administration (pre-diocesan jurisdiction) of the Caucasus was established on 30 December 1993, with headquarters in the Georgian capital Tbilisi, with a territory including Georgia, Armenia and, until 2001, Azerbaijan.

Georgians of Armenian Rite are in the care of the Ordinariate for Armenian Catholics in Eastern Europe, which was established on 13 July 1991, covering a vast area including Russia and Ukraine, much vaster than Georgia, which has some 400,000 faithful in all (Annuario Pontificio 2012).

Georgian Catholics of the Byzantine rite are said to have numbered 7,000 in 2005.

Theatine and Capuchin missionaries worked for reunion in Georgia, but under Imperial Russia in 1845, Catholics were not allowed to use the Byzantine Rite. Many Catholics adopted the Armenian Rite until the institution of religious liberty in 1905, which allowed them to return to the Byzantine Rite. In 1937, the Georgian Catholic exarch, Shio Batmanishvili (or Batmalishviii), was executed by the Soviets.

There are approximately 80,000 Catholics in Georgia – around 2% of the total population. They are mostly found either in Tbilisi or in the southern region of the country, where exclusively Catholic villages exist. There are three Catholic churches in Tbilisi; the Cathedral of Our Lady in the old town, the parish church of St Peter and St Paul, and Mar Shimon Bar Sabbae Assyrian Chaldean Catholic Church in Saburtalo. A Neocatechumenal Way Mission involving priests, families in mission and lay persons has been present in Sts Peter and Paul church since 1991, helping and leading the parish.

The Catholics in Tbilisi are mostly Georgians and Armenians, as well as a small Assyrian community of the Chaldean Rite.

This church also provides mass in English, catering for the growing Catholic expatriate population of Americans, Europeans, Indians and Maltese. There are only about 1000 practicing Catholics in Tbilisi. Many other Catholic churches were confiscated by the Georgian Orthodox Church after the fall of communism when the state gave all church property back to the Georgian Orthodox church. Recently, a new seminary has been completed on the outskirts of Tbilisi

A Catholic church is also present in Sukhumi, in Abkhazia. Other Catholic Churches are found in Vale, Gori and in Batumi.