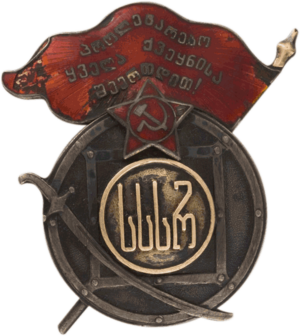 It is coterminous with the present-day republic of Georgia, a pre-existing country in the Caucasus which gained autonomy as a constituent republic of the Union of Soviet Socialist Republics after being annexed by the Russian Empire in 1810 and in 1921 by the Russian Soviet Federative Socialist Republic, and became independent upon the dissolution of the Soviet Union in 1991, whereupon each former SSR became a sovereign state.

On November 28, 1917, after the October Revolution in Russia, there was a Transcaucasian Commissariat headed by Mensheviks established in Tiflis (from 1936 on Tbilisi).

The Socialist Soviet Republic of Georgia was established on February 25, 1921.[1] On March 2 of the following year the first constitution of Soviet Georgia was accepted.

From March 12, 1922 to December 5, 1936 it was part of the Transcaucasian SFSR together with the Armenian SSR and the Azerbaijan SSR. In 1936, the TSFSR was dissolved. During this period the province was led by Lavrentiy Beria, first secretary of the Georgian Central Committee of the Georgian Communist Party[2] The Soviet Government forced Georgia to cede several areas to Turkey (the province of Tao-Klarjeti and part of Batumi province), Azerbaijan (the province of Hereti/Saingilo), Armenia (the Lore region) and Russia (northeastern corner of Khevi, eastern Georgia).

In 1936, the TFSSR was dissolved and Georgia became the Georgian Soviet Socialist Republic.

Lavrentiy Beria became head of the Georgian OGPU and purged Georgia until he was transferred to Moscow in 1938.

Reaching the Caucasus oilfields was one of the main objectives of Hitler's invasion of the USSR in June 1941, but the armies of the Axis powers did not get as far as Georgia. The country contributed almost 700,000 fighters (350,000 were killed) to the Red Army, and was a vital source of textiles and munitions. During this period Stalin, himself born in Georgia, ordered the deportation of the Chechen, Ingush, Karachay and the Balkarian peoples from the Northern Caucasus; they were transported to Siberia and Central Asia for alleged collaboration with the Nazis. He abolished their respective autonomous republics. The Georgian SSR was briefly granted some of their territory until 1957.[3]

On March 9, 1956, about a hundred Georgian students were killed when they demonstrated against Nikita Khrushchev's policy of de-Stalinization that was accompanied by general criticism of the whole Georgian people and culture.[citation needed]

The decentralisation program introduced by Khrushchev in the mid-1950s was soon exploited by Georgian Communist Party officials to build their own regional power base. A thriving pseudo-capitalist shadow economy emerged alongside the official state-owned economy. While the official growth rate of the economy of the Georgia was among the lowest in the USSR, such indicators as savings level, rates of car and house ownership were the highest in the Union,[4] making Georgia one of the most economically successful Soviet republics. Corruption was at a high level. Among all the union republics, Georgia had the highest number of residents with high or special secondary education.[5]

Although corruption was hardly unknown in the Soviet Union, it became so widespread and blatant in Georgia that it came to be an embarrassment to the authorities in Moscow. Eduard Shevardnadze, the country's interior minister between 1964 and 1972, gained a reputation as a fighter of corruption and engineered the removal of Vasil Mzhavanadze, the corrupt First Secretary of the Georgian Communist Party. Shevardnadze ascended to the post of First Secretary with the blessings of Moscow. He was an effective and able ruler of Georgia from 1972 to 1985, improving the official economy and dismissing hundreds of corrupt officials.

End of the Soviet period

Shevardnadze's appointment as Soviet Foreign Minister in 1985 brought his replacement in Georgia by Jumber Patiashvili, a conservative and generally ineffective Communist who coped poorly with the challenges of perestroika. Towards the end of the late 1980s, increasingly violent clashes occurred between the Communist authorities, the resurgent Georgian nationalist movement and nationalist movements in Georgia's minority-populated regions (notably South Ossetia). On April 9, 1989, Soviet troops were used to break up a peaceful demonstration at the government building in Tbilisi. Twenty Georgians were killed and hundreds wounded and poisoned. The event radicalised Georgian politics, prompting many - even some Georgian communists - to conclude that independence was preferable to continued Soviet rule.

On October 28, 1990, democratic parliamentary elections were held, and on November 15 the nation was renamed the "Republic of Georgia." It declared independence on April 9, 1991, under Zviad Gamsakhurdia. However, this was unrecognized by the Soviet government and Georgia was in the USSR until its collapse in December 1991. On August 24, 1995, on the basis of the constitution of the Georgian Democratic Republic in 1921, a new Constitution of Georgia was adopted on which the country's name changed to Georgia.[6]