Georgians (Georgian: ქართველები, translit.: kartvelebi) are a nation and ethnic group who constitute a majority of the population in Georgia. Large Georgian communities are also present throughout Russia, Turkey, Greece, Ukraine, Iran, United States, and to a lesser extent throughout the European Union.

Georgians arose from the ancient Colchian and Iberian civilizations. They embraced Christianity in the early 4th century and now majority of Georgians are Eastern Orthodox Christians and most follow their national autocephalous Georgian Orthodox Church. There are also small Georgian Catholic and Muslim communities in Tbilisi and Adjara, as well as a significant number of irreligious Georgians.

A complex process of nation formation has resulted in a diverse set of geographic subgroups of Georgians, each with its characteristic traditions, manners, dialects and, in the case of Svans and Mingrelians, own regional languages. The Georgian language, with its own unique writing system and extensive written tradition going back to the 5th century, is the official language of Georgia as well as the language of literacy and education of all Georgians living in the country.

Located on the crossroads of predominantly Christian Europe and Muslim Western Asia, Georgian people have maintained their Christian identity in the face of great pressure from neighboring Muslim empires. By the early 11th century they formed a unified Kingdom of Georgia and inaugurated the Georgian Golden Age, a height of political and cultural power of the nation. This lasted until being weakened by Mongol invasions, as well as internal divisions following the death of George V the Brilliant, the last of the great kings of Georgia. Thereafter and throughout the early modern period Georgians became politically fractured and fell into decline due to the onslaught of various hostile empires, including the Ottoman Empire and successive dynasties of Persia. To ensure Georgia's survival, in 1783 Heraclius II of Georgia forged an alliance with the Russian Empire, which Georgians viewed as a replacement for their fallen traditional ally — Byzantine Empire. The Russo-Georgian alliance, however, backfired as Russia was unwilling to fulfill the terms of the treaty, proceeding to annex the troubled kingdom in 1801. Georgians briefly reasserted their independence from Russia under the First Georgian Republic from 1918-1921, and finally, in 1991 from the Soviet Union.

Georgians call themselves Kartvelebi (ქართველები), their land Sakartvelo (საქართველო), and their language Kartuli (ქართული). According to The Georgian Chronicles, the ancestor of the Kartvelian people was Kartlos, the great-grandson of the Biblical Japheth. However, scholars agree that the word is derived from the Karts, the latter being one of the proto-Georgian tribes that emerged as a dominant group in ancient times.[6] Ancient Greeks (Strabo, Herodotus, Plutarch, Homer, etc.) and Romans (Titus Livius, Cornelius Tacitus, etc.) referred to western Georgians as Colchians and eastern Georgians as Iberians.[7]

The term "Georgians" is derived from the country of Georgia, which in turn is of unclear etymology. A definitive provenance of the term Georgia has never been established, but there are a number of unconfirmed theories as to their provenance. Popular theories present the term Georgians as stemming from reverence of St.George (who is considered a patron saint of Georgia), or from the Greek word Georgos, which means farmer, as when the Greeks came into the region (in Colchis[6]) they encountered a developed agricultural society.[6]

However, as Prof. Alexander Mikaberidze adds, these explanations for the word Georgians/Georgia are rejected by the scholarly community, who point to the Persian word gurğ/gurğān ("wolf"[8]) as the root of the word.[6] Starting with the Persian word gurğ/gurğān, the word was later adopted in numerous other languages, including Slavic and West European languages.[6][9] This term itself might have been established through the ancient Iranian appellation of the near-Caspian region, which was referred to as Gorgan ("land of the wolves"[10]).[6] Mikaberidze's categorical position is not universally accepted and the Greek and Persian origin theories are not deemed mutually exclusive in modern scholarship; the likes of Elguja Khintibidze assert that present-day term "Georgia" likely came from the confluence of both Greco-Latin and "oriental", i.e. Perso-Arabic etymologies.[11]

Most historians and scholars of Georgia as well as anthropologists, archaeologists and linguists tend to agree that the ancestors of modern Georgians inhabited the southern Caucasus and northern Anatolia since the Neolithic period.[12] Scholars usually refer to them as Proto-Kartvelian (Proto-Georgians such as Colchians and Iberians) tribes.[13]

The Georgian people in antiquity have been known to the ancient Greeks and Romans as Colchians and Iberians.[14][15] East Georgian tribes of Tibarenians-Iberians formed their kingdom in 7th century BCE. However, western Georgian tribes (Moschians, Suanians, Mingrelians and others) established the first Georgian state of Colchis (circa 1350 BCE) before the foundation of the Iberian Kingdom in the east.[16] According to the numerous scholars of Georgia, the formations of these two early Georgian kingdoms of Colchis and Iberia, resulted in the consolidation and uniformity of the Georgian nation.[17]

Both Colchians and Iberians played an important role in the ethnic and cultural formation of the modern Georgian nation.[21][22]

According to the scholar of the Caucasian studies Cyril Toumanoff:

Colchis appears as the first Caucasian State to have achieved the coalescence of the newcomer, Colchis can be justly regarded as not a proto-Georgian, but a Georgian (West Georgian) kingdom ... It would seem natural to seek the beginnings of Georgian social history in Colchis, the earliest Georgian formation.[23] 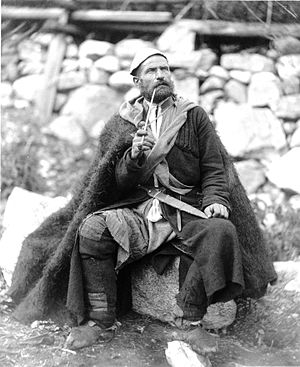 Georgian is the primary language for Georgians of all provenance, including those who speak other Kartvelian languages: Svans, Mingrelians and the Laz. The language known today as Georgian is a traditional language of the eastern part of the country which has spread to most of the present-day Georgia after the post-Christianization centralization in the first millennium AD, today Georgians regardless of their ancestral region use Georgian as their official language. The regional languages Svan and Mingrelian are languages of the west that were traditionally spoken in the pre-Christian Kingdom of Colchis, but later lost importance as the unified Kingdom of Georgia emerged. Their decline is largely due to the capital of the unified kingdom, Tbilisi, being in the eastern part of the country known as Kingdom of Iberia effectively making the language of the east an official language of the Georgian monarch.

All of these languages comprise the Kartvelian language family along with the related language of the Laz people, which has speakers in both Turkey and Georgia. 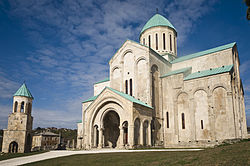 The Bagrati Cathedral, The Cathedral of the Dormition, built during the reign of King Bagrat III, one of Georgia's most significant medieval religious buildings returned to its original state in 2012.

According to Orthodox tradition, Christianity was first preached in Georgia by the Apostles Simon and Andrew in the 1st century. It became the state religion of Kartli (Iberia) in 337.[25][26] At the same time, in the first centuries C.E., the cult of Mithras, pagan beliefs, and Zoroastrianism were commonly practiced in Georgia.[27] The conversion of Kartli to Christianity is credited to St. Nino of Cappadocia. Christianity gradually replaced all the former religions except Zoroastrianism, which become a second established religion in Iberia after the Peace of Acilisene in 378.[28] The conversion to Christianity eventually placed the Georgians permanently on the front line of conflict between the Islamic and Christian world, while allying themselves permanently with the Eastern Roman Empire. Georgians remained mostly Christian despite repeated invasions by Muslim powers, and long episodes of foreign domination.

As was true elsewhere, the Christian church in Georgia was crucial to the development of a written language, and most of the earliest written works were religious texts. Medieval Georgian culture was greatly influenced by Eastern Orthodoxy and the Georgian Orthodox Church, which promoted and often sponsored the creation of many works of religious devotion. These included churches and monasteries, works of art such as icons, and hagiographies of Georgian saints.

Today, 83.9% of the Georgian population, most of whom are ethnic Georgian, follow Eastern Orthodox Christianity.[29] However, many Georgians nominally identify themselves with Orthodox Christianity for traditional, cultural and historical reasons, with an estimated quarter of the population stating that religion does not necessarily play an important role in their day-to-day life.[30] Additionally, as of 2010, only 32% of the country's population attended religious services, suggesting strong secular influences.[31]

A sizable Georgian Muslim population exists in Adjara. This autonomous Republic borders Turkey, and was part of the Ottoman Empire for a longer amount of time than other parts of the country. Those Georgian Muslims practice the Sunni Hanafi form of Islam. Islam has however declined in Adjara during the 20th century, due to Soviet anti-religious policies, cultural integration with the national Orthodox majority, and strong missionary efforts by the Georgian Orthodox Church.[32] Islam remains a dominant identity only in the eastern, rural parts of the Republic. In the early modern period, converted Georgian recruits were often used by the Persian and Ottoman Empires for elite military units such as the Mameluks, Kizilbash, and ghulams. The Georgians in Iran are all reportedly Shia Muslims today, while the Georgian minority in Turkey are mostly Sunni Muslim.

In addition to traditional religious confessions, Georgia retains irreligious segments of society, as well as a significant portion of nominally religious individuals who do not actively practice their faith.[33] 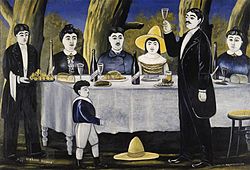 Georgians having a feast at Supra and Tamada making a toast. Painting by Niko Pirosmani.

The importance of both food and drink to Georgian culture is best observed during a Caucasian feast, or supra, when a huge assortment of dishes is prepared, always accompanied by large amounts of wine, and dinner can last for hours. In a Georgian feast, the role of the tamada (toastmaster) is an important and honoured position.

The Georgians have historically been classified into various subgroups based on the geographic region which their ancestors traditionally inhabited.

Even if a member of any of these subgroups moves to a different region, they will still be known by the name of their ancestral region. For example, if a Gurian moves to Tbilisi (part of the Kartli region) he will not automatically identify himself as Kartlian despite actually living in Kartli. This may, however, change if substantial amount of time passes. For example, there are some Mingrelians who have lived in the Imereti region for centuries and are now identified as Imeretian or Imeretian-Mingrelians.

Last names from mountainous eastern Georgian provinces (such as Kakheti, etc.) can be distinguished by the suffix –uri (ური), or –uli (ული). Most Svan last names typically end in –ani (ანი), Mingrelian in –ia (ია), -ua (უა), or -ava (ავა), and Laz in –shi (ში).

Outside of modern Georgia

Laz people also may be considered Georgian based on their geographic location and religion. According to the London School of Economics' anthropologist Mathijs Pelkmans,[37] Lazs residing in Georgia frequently identify themselves as "first-class Georgians" to show pride, while considering their Muslim counterparts in Turkey as "Turkified Lazs".[38]