Gerardus Mercator was born 5 March 1512 in Rupelmonde, County of Flanders (in modern-day Belgium). He died 2 December 1594 in Duisburg, Duchy of Cleves (in modern-day Germany).

He is renowned to the present day as the cartographer who created a world map based on a new projection which represented sailing courses of constant bearing as straight lines. In his own day he was the world's most famous geographer but in addition he had interests in theology, philosophy, history, mathematics and magnetism as well as being an accomplished engraver, calligrapher and maker of globes and scientific instruments. He wrote few books but much of his knowledge is to be found in the copious legends on his wall maps and the prefaces that he composed for his atlas (the first in which the term "atlas" appears) and the sections within it.

Gerardus Mercator, (pronounced /dʒᵻˈrɑːrdəs mərˈkeɪtər/[1]), was born Gerhard (or Gheert) De Kremer (or Cremer), the seventh child of Hubert De Kremer and his wife Emerance. Their home town was Gangelt in the Duchy of Julich but, at the time of the birth, they were visiting Hubert's brother (or uncle[2]) Gisbert De Kremer in the small town of Rupelmonde in the county of Flanders. Hubert was a poor artisan, a shoemaker by trade, but Gisbert, a priest, was a man of some importance in the community. Their stay in Rupelmonde was brief and within six months they returned to Gangelt and there Mercator spent his early childhood.[3] Six years later, in 1518, the Kremers moved back to Rupelmonde,[4] possibly motivated by the deteriorating conditions in Gangelt—famine, plague and lawlessness.[5]

The question of nationality

The nationality of Mercator is contentious. In 1868, just before the 400th anniversary of the famous world map, the Belgian Jean Van Raemdonck had just published a biography of Mercator, the Flemish geographer, in which he presented a speculative family tree with ancestors in Rupelmonde.[6] In 1869, in Duisberg, Arthur Breusing published a small book on Mercator, the German geographer, in which he claimed that the family was from Gangelt, Mercator was conceived there and his birth during the visit to Rupelmonde didn't invalidate his German nationality.[7] The debate continued in 1914 when Heinrich Averdunk attacked Raemdonck's 'fictions' and argued that the many occurrences of the name Kremer in Julich in the sixteenth century supported Breusing's claim that the family was German.[8] Today, many Belgians and Germans still claim Mercator as their own, despite the lack of any evidence pertaining to the birthplace and background of the father Hubert. Most modern scholars adopt a more neutral position, hesitating to assign a nationality to Mercator, but many popular accounts simply plump for one nation or another without evidence.[9]

When Hubert died in 1526 Gisbert took over the protection of the family and Mercator, aged 15, was sent off to the famous school of the Brethren of the Common Life in 's-Hertogenbosch.[10] Here, under the guidance of Macropedius, he would study the trivium (latin, logic and rhetoric) and the classics such as the philosophy of Aristotle, the natural history of Pliny and the geography of Ptolemy[11] All teaching was in Latin and he would read, write and converse in Latin—and give himself a new Latin name, Gerardus Mercator Rupelmundanus, Mercator being the Latin translation of Cremer of Kremer meaning merchant. The Brethren were renowned for their scriptorum[12] and here Mercator must have encountered the italic script which he employed in his later work.

The Atlas and Atlas Minor 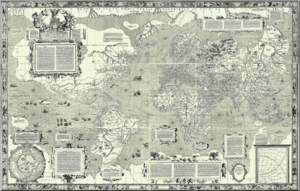 Mercator was born in the town of Rupelmonde where he was named Gerard de Kremer or de Cremer. He was raised in Gangelt in the Duchy of Jülich, the home town of his parents. Mercator is the Latinized form of his name which means "merchant". He was educated in the then Belgian city of 's-Hertogenbosch by the famous humanist Macropedius and at the University of Leuven (both in the historical Duchy of Brabant as part of Belgium). Despite Mercator's fame as a cartographer, his main source of income came through his craftsmanship of mathematical instruments. In Leuven, he worked with Gemma Frisius and Gaspar Van Der Heyden (Gaspar Myrica) from 1535 to 1536 to construct a terrestrial globe, although the role of Mercator in the project was not primarily as a cartographer, but rather as a highly skilled engraver of brass plates. Mercator's own independent map-making began only when he produced a map of Palestine in 1537; this map was followed by another—a map of the world (1538) – and a map of the County of Flanders (1540). During this period he learned Italic script because it was the most suitable type of script for copper engraving of maps. He wrote the first instruction book of Italic script published in northern Europe.

Mercator was charged with heresy in 1544, on the basis of his sympathy for Protestant beliefs and suspicions about his frequent travels. The charges of Lutheran heresy laid against Mercator and forty others were deadly serious: two men were burnt at the stake, another was beheaded and two women were entombed alive. He was in prison for seven months before the charges were dropped—possibly because of intervention from the university authorities. 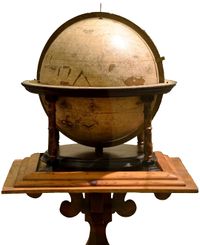 Terrestrial globe by Mercator dating from 1541. It is now in the museum collection of the Palazzo Ducale in Urbania, Italy, and is one of about 22 existing Mercator globes.

In 1552, he moved to Duisburg, one of the major cities in the Duchy of Cleves, and opened a cartographic workshop where he completed a six-panel map of Europe in 1554. He worked also as a surveyor for the city. His motives for moving to Duisburg are not clear. Mercator might have left the County of Flandria for religious reasons or because he was informed of plans to found a university. He taught mathematics at the academic college of Duisburg. In 1564, after producing several maps, he was appointed court cosmographer to Wilhelm, Duke of Jülich-Cleves-Berg. In 1569, he devised a new projection for a nautical chart which had vertical lines of longitude, spaced evenly, so that sailing courses of constant bearing were represented as straight lines (loxodromes).

Mercator took the word atlas to describe a collection of maps, and encouraged compatriot Abraham Ortelius to compile the first modern world atlas – Theatrum Orbis Terrarum – in 1570. He produced his own atlas in a number of parts, the first of which was published in 1578 and consisted of corrected versions of the maps of Ptolemy (though introducing a number of new errors). Maps of Belgium, France, and Germany were added in 1585 and of the Balkans and Greece in 1588; further maps were published by Mercator's son, Rumold Mercator, in 1595 after the death of his father.

Mercator learnt globe making from Gemma Frisius, and went on to become the leading globe maker of his age. Twenty-two pairs of his globes (terrestrial globe and matching celestial globe) have survived.

Following his move to Duisburg, Mercator never left the city and died there, a respected and wealthy citizen.

Mercator is buried in the Church of Our Saviour (Salvatorkirche) in Duisburg. Exhibits of his works can be seen in the Mercator treasury located in the city.

More exhibits about Mercator's life and work are featured at the Mercator Museum in Sint-Niklaas, Belgium.

The famous Belgian sailing ship Mercator is named after Gerardus Mercator to honour his improvements in the area of naval navigation. The ship was built in 1932 and is currently moored in the marine of Ostend, where it is used as a museum.

2012 marked the 500th anniversary of Mercator's birth. On 4 March 2012, celebrations of Mercator's life were held at his birthplace, Rupelmonde.

In 2015, a Google Doodle commemorated his 503rd Birthday.

Only two copies of the map are extant: one at the American Geographical Society Library, and another at the New York Public Library. This is the first map to apply the name America to the North American continent as well as to South America. In using the term “America” in this way, Mercator shares responsibility with Martin Waldseemüller for naming the Western Hemisphere. The double cordiform projection, the broken heart, similar to that of Oronce Fine, may well have been chosen because of its relationship with the Lutheran view of the world.

A major new depiction of the British Isles at the time. It measures approximately 3ft by 4ft and was engraved on 8 copper plates by Mercator himself. The scale is approximately 14 miles to 1 inch. It is possible that the draft from which Mercator developed this image of the British Isles was made by either Laurence Nowell or John Rudd or John Elder.

Assembled in the early 1570s to help with planning the grand tour of Europe of his patron's son, the crown prince of Cleves. The maps were from compiled by cutting out portions of the wall maps of the British Isles, Europe and the world that he had available in his workshop and re-assembling them into an atlas.

Atlas, or Cosmographic Meditations on the Fabric of the World and the Figure of the Fabrick'd. Many copies are available worldwide. The atlas may also be viewed at websites such as the Library of Congress and the Darlington Library at the University of Pittsburg. High resolution images of the text and maps are available on a CD published by Octavo (OCLC 48878698). Robert Karrow's introduction to the Octavo edition of the atlas and David Sullivan's translation of the atlas text are freely available in an online pdf file