Gerhard "Gerd" Barkhorn (20 March 1919 – 8 January 1983) was the second most successful fighter ace of all time after fellow Luftwaffe pilot Erich Hartmann. Barkhorn joined the Luftwaffe in 1937 and completed his training in 1939.

Barkhorn flew his first combat missions in May 1940, during the Battle of France and then the Battle of Britain without scoring an aerial victory—that is an aerial combat encounter resulting in the destruction of the enemy aircraft. His first victory came in July 1941 and his total rose steadily against Soviet opposition. In March 1944 he was awarded the third highest decoration in the Wehrmacht when he received the Knight's Cross with Oak Leaves and Swords (Ritterkreuz mit Eichenlaub und Schwertern) for 250 aerial victories. Despite being the second highest scoring pilot in aviation history, Barkhorn was not awarded the Diamonds to his Knight's Cross with Oak Leaves and Swords after achieving his 300th victory on 5 January 1945.

Barkhorn survived the war and was taken prisoner by the Western Allies in May 1945 and released later that year. After the war Barkhorn joined the Luftwaffe of the Bundeswehr also called colloquially Bundesluftwaffe, serving until 1976. On 6 January 1983, Barkhorn was involved in a car crash with his wife Christl. She died instantly and Gerhard died two days later on 8 January 1983.

Barkhorn was born on 20 March 1919 in Königsberg in the Free State of Prussia of the Weimar Republic. Today it is Kaliningrad in Kaliningrad Oblast, the Russian exclave between Poland and Lithuania on the Baltic Sea. He was one of four children of Stadtbauoberinspektor (urban design inspector) Wilhelm and his wife Therese. Barkhorn had two brothers, Helmut and Dieter, and a sister Meta.[1][Note 1] 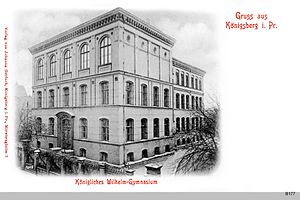 Following four years of Volksschule (primary school), Barkhorn attended the Wilhelms-Gymnasium, a secondary school, where he graduated with his Abitur (diploma). After his compulsory Reichsarbeitsdienst (Reich Labour Service) Barkhorn joined the military service in Luftwaffe of the Third Reich in November 1937 as a Fahnenjunker (Cadet). He started his flight training in March 1938.[2][Note 2]

World War II in Europe began on Friday 1 September 1939 when German forces invaded Poland and Barkhorn was selected for specialized fighter pilot training. Upon completion of his training, he was commissioned as a Leutnant (Second Lieutenant) and posted to 3. Staffel (3rd squadron) in Jagdgeschwader 2 "Richthofen" (JG 2—2nd Fighter Wing).[2] This unit had an old tradition and was named after the World War I fighter pilot Manfred von Richthofen. He was flight trained by Franz Stigler,[5] who would later become a Luftwaffe ace himself. He was then transferred to the 6. Staffel (6th squadron) of Jagdgeschwader 52 (JG 52—52nd Fighter Wing) on 1 August 1940.[Note 3]

Barkhorn flew his first combat sorties over Belgium and France during the Battle of France and later over southern England during the Battle of Britain, flying the Messerschmitt Bf 109E. On 1 August 1940 Barkhorn was transferred to 6./Jagdgeschwader 52 (JG 52). He did not have any success, although he flew some 21 combat sorties and was shot down in the English Channel on 29 October by RAF fighters.[6] Shortly thereafter he was rewarded with the Eisernes Kreuz erster Klasse (Iron Cross First Class). In the Staffel, he flew alongside another promising pilot, Hans-Joachim Marseille.

In 1941 JG 52 was transferred to the east and participated in Operation Barbarossa, the invasion of the Soviet Union, on 22 June 1941. Subsequently, Gerhard Barkhorn scored his first victory by shooting down a Red Air Force DB-3 bomber on 2 July, flying his 120th combat sortie.[7] This success seemed to have a reassuring effect on Barkhorn, who had finally found his 'shooting eye'. By November his tally had reached 10 victories and he was promoted to Oberleutnant on 11 November 1941.

On 21 May 1942 Barkhorn was appointed Staffelkapitän of 4./JG 52. He continued to add to his score over the next year, until on 19 July when he became "ace-in-a-day" by shooting down six aircraft in his Bf 109F. He was wounded on 25 July and put out of action for two months, returning to combat in October. During July 1942 Barkhorn had destroyed 30 Soviet aircraft.[8] On 23 August he received the Knight's Cross of the Iron Cross (Ritterkreuz des Eisernen Kreuzes) for having shot down a total of 59 aircraft.[9] After a two-month break from the front he returned to action in early October. On 19 December 1942, Barkhorn had raised his score to 101 victories.[10] That day, he became the 32nd Luftwaffe pilot to achieve the century mark.[11] On 9 January 1943, Barkhorn claimed his 105th kill. His victims included Lieutenant Vasiliyev, and Hero of the Soviet Union Podpolkovnik Lev Shestakov of the 236 IAP Fighter Regiment. Barkhorn strafed their Yakovlev Yak-1 fighters until they caught fire. Both pilots survived.[12][Note 4] Barkhorn was awarded Oak Leaves to his Knight's Cross on 11 January 1943.

Barkhorn, now a Hauptmann, was appointed Gruppenkommandeur of II./JG 52 on 1 September 1943. On 5 September he shot down and killed Hero of the Soviet Union and Soviet fighter ace Nikolay Klepikov, an ace with 10 personal and 32 shared victories. This was offset by the loss of II./JG 52's 173-kill ace Oberleutnant Heinz Schmidt. The two Lavochkin La-5s shot down by Barkhorn were his 165th and 166th aerial victories.[13] Barkhorn reached the 200 mark on 30 November 1943.[14] The main German fighter unit covering the Crimea and Kuban was his II./JG 52 and in the three months between December 1943 and 13 February 1944 the unit claimed 350 victories, of which 50 were claimed by Barkhorn personally.[15] On 13 February 1944 he reached 250 victories, prompting a price being put on his head by the Red Air Force.[16] He had claimed 15 victories in September, 23 in November and 28 in December, including seven on 28 December alone.

On 2 March 1944 he was awarded the Swords to his Knight's Cross. He attended the wedding of fellow ace Erich Hartmann as best man. Barkhorn was promoted to major on 1 May 1944.[17] On 31 May, on 273 victories, he was shot down by Soviet P-39 Airacobras. Flying his sixth mission of that day he intercepted some Soviet bombers but failed to notice the escorting fighters. His Bf 109G-6 was severely damaged and despite severe wounds to his right shoulder and leg he managed to crash-land behind his own lines, but was hospitalized for four months. It has not been possible to identify the Soviet pilot who shot him down, but it was not, as some sources suggest, high scoring Soviet ace Aleksandr Pokryshkin who was not in the area at the time.

Eventually returning to his unit the psychological damage and combat stress on Barkhorn became apparent; sitting in his cockpit he became overcome with anxiety, and even when flying with friendly aircraft behind him he felt intense fear. It took several weeks for him to overcome this condition.[18]

Returning to combat in October he claimed his 275th victory on 14 November. Over the next few weeks Barkhorn added another 26 kills, scoring his 301st (and final) victory on 5 January 1945.[19]

On 16 January 1945 Barkhorn was assigned as Geschwaderkommodore to Jagdgeschwader 6 (JG 6), a unit assigned to defend the Reich and equipped with the Focke-Wulf Fw 190D (although he preferred to retain his Bf 109G as well). JG 6 was a unit consisting mostly of new recruits and former Bf-110 pilots; it suffered heavy losses against the American air fleets. Barkhorn did not last long in this position and was forced to take a medical absence because of severe physical and mental strain.[20]

After his hospitalization Barkhorn was invited by Adolf Galland to join the elite Jagdverband 44 (JV 44) flying the Messerschmitt Me 262 jet-fighter. He found flying the Me 262 over the western front difficult and he did not score any victories in it.[21] On 21 April 1945, he flew his 1104th and last mission. One of the engines of his aircraft flamed out as he was approaching an enemy bomber formation and he was forced to make an emergency landing. As he approached the airfield, his jet was attacked by several prowling P-51 fighters; Barkhorn managed to land his burning plane though he received a slight wound as a result of this action when the cockpit canopy - which he slid back prior to crash landing - slammed forward on his neck. Taken prisoner by the Western Allies while still in hospital, he was released from Allied captivity in September 1945.

Barkhorn claimed 301 victories in 1,104 operational sorties. His total included 110 Yak fighters, 87 LaGG fighters, 21 Il-2s and 12 twin-engined medium bombers. He was shot down 9 times, bailed out once and was wounded 3 times.

Barkhorn, after he was released as a prisoner of war, found work in the automobile industry. Following the decision of the Cabinet of Germany to rearm the Federal Republic of Germany, Barkhorn joined the military service of the Bundesluftwaffe in 1956. From 1 April 1957 to 31 December 1962, he commanded the Jagdbombergeschwader 31 "Boelcke" (JaBoG 31—Fighter-Bomber Wing 31). In 1964 he was posted to the staff of Luftwaffen-Erprobungskommando (Air Force Test Command) holding the rank of Oberst.[4]

Barkhorn was promoted to Brigadegeneral (brigadier general) in 1969 and to Generalmajor (major general) in 1973. His last position was Chief of Staff of the Second Allied Tactical Air Force, a NATO military formation under Allied Air Forces Central Europe. He retired from active service on 30 September 1975.[4]

On 6 January 1983, during a winter storm on an autobahn near Cologne, he and his wife Christl were involved in a car crash. His wife died instantly and Barkhorn, without regaining consciousness, died in hospital in Frechen/Cologne on 8 January 1983. They were buried in Tegernsee, Bavaria.[22]