German East Africa (German: Deutsch-Ostafrika) was a German colony in the African Great Lakes region, which included what are now Burundi, Rwanda, and the mainland part of present Tanzania (formerly known as Tanganyika). Its area was 994,996 km2 (384,170 sq mi), nearly three times the area of present-day Germany.

The colony was organized when the German military was called upon to put down a revolt against the activities of a colonial company during the late 1880s. It ended with Imperial Germany's defeat in World War I. Afterwards, the territory was divided between Britain and Belgium and reorganized as a mandate of the League of Nations.

Like other powers, the Germans expanded their empire in the Africa Great Lakes region on the basis of fighting slavery and the slave trade. Unlike other imperial powers, however, they never actually formally abolished it, preferring instead to curtail the production of new "recruits" and regulate the extant slaving business.[1]

The colony began with Carl Peters, an adventurer who founded the Society for German Colonization and signed treaties with several native chieftains on the mainland opposite Zanzibar. On 3 March 1885, the German government announced it had granted an imperial charter (signed by Bismarck on 27 February 1885) to Peters' company and intended to establish a protectorate in the Africa Great Lakes region. Peters then recruited specialists, who began exploring south to the Rufiji River and north to Witu, near Lamu on the coast.

When the Sultan of Zanzibar protested, since he claimed to be ruler on the mainland as well, chancellor Otto von Bismarck sent five warships, which arrived on 7 August 1885 and trained their guns on the Sultan's palace. The British and Germans agreed to divide the mainland between themselves, and the Sultan had no option but to agree.

German rule was quickly established over Bagamoyo, Dar es Salaam, and Kilwa, even sending the caravans of Tom von Prince, Wilhelm Langheld, Emin Pasha, and Charles Stokes to dominate "the Street of Caravans". The Abushiri Revolt of 1888 was put down (with British help) the following year. In 1890, London and Berlin concluded the Heligoland-Zanzibar Treaty, returning Heligoland (seized during the Napoleonic wars) to Germany and deciding on the borders of German East Africa (the exact boundaries remained unsurveyed until 1910).

Between 1891 and 1894, the Hehe tribe, led by Chief Mkwawa, resisted German expansion. They were defeated because rival tribes supported the Germans. After years of guerrilla warfare, Mkwawa himself was cornered and committed suicide in 1898.

The Maji Maji Rebellion occurred in 1905 and was put down by the governor, Count Gustav Adolf von Götzen. But scandal soon followed, with stories of corruption and brutality, and in 1907 Chancellor Bülow appointed Bernhard Dernburg to reform the colonial administration. It became a model of colonial efficiency and commanded extraordinary loyalty among the natives during the First World War.

Paul von Lettow-Vorbeck (who had served in German South-West Africa as well as German Kamerun), was a successful general in German East Africa during World War I.

Commerce and growth started in earnest under German direction. Early on it was realized that economic development would depend on reliable transportation. Over 100,000 acres (40,000 ha) were under sisal cultivation – the biggest cash crop. Two million coffee trees were planted and rubber trees grew on 200,000 acres (81,000 ha), along with large cotton plantations. To bring these agricultural products to market, beginning in 1888, the Usambara Railway, or Northern Railroad, was built from Tanga to Moshi, Tanzania. The longest line, the Central Railroad covered 775 miles (1,247 km) from Dar es Salaam to Morogoro, Tabora and Kigoma. The final link to the eastern shore of Lake Tanganyika had been completed in July 1914 and was cause for a huge and festive celebration in the capital with an agricultural fair and trade exhibition. Harbor facilities were built or improved with electrical cranes, with rail access and warehouses. Wharves were remodeled at Tanga, Bagamoyo and Lindi. In 1912 Dar es Salaam and Tanga received 356 freighters and passenger steamers and over 1,000 coastal ships and local trading vessels.[5] By 1914, Dar es Salaam and the surrounding province had a population of 166,000, among them 10,490 (1,050 Europeans, 1,000 of them Germans. In all of the German East Africa were 3,579 Germans.[6] In its own right, Dar es Salaam became the showcase city of all of tropical Africa.[7]

Gold mining in Tanzania in modern times dates back to the German colonial period, beginning with gold discoveries near Lake Victoria in 1894. The first gold mine in the colony was the Sekenke Gold Mine, which began operation in 1909 after gold was found there in 1907.[8]

Despite all these efforts, German East Africa never achieved a profit for the German Empire and needed to be subsidized by the Berlin treasury.

Germany developed an educational program for Africans that involved elementary, secondary and vocational schools.[who?]"Instructor qualifications, curricula, textbooks, teaching materials, all met standards unmatched anywhere in tropical Africa."[9] In 1924, ten years after the beginning of the First World War and six years into British rule, the visiting American Phelps-Stokes Commission reported: "In regards to schools, the Germans have accomplished marvels. Some time must elapse before education attains the standard it had reached under the Germans."[9]

One of the influences of this German development of education in their colony is the word "shule" (from "Schule" in German) that means school. Since Germans were the first colonialists to establish a solid educational program in the African Great Lakes region, the word "shule" has been borrowed into the Bantu Swahili language, the lingua franca of the African Great Lakes.

Population on the Eve of the First World War

In the most populous colony of the German Empire there were more than 7.5 million locals on only some 5,000 Europeans, who resided mainly at the coastal locations and official residences. In 1913 only 882 German settlers (farmers and planters) lived in the colony. In contrast, about 70,000 Africans worked on the plantations of German East Africa.[10] 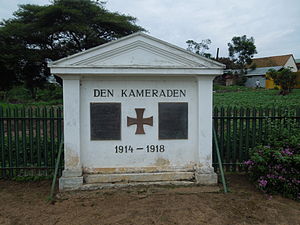 The story of German East Africa in the First World War is essentially the history of the colony's military commander, General Paul Emil von Lettow-Vorbeck. A vibrant officer, he spent the war harrying the forces of the British Empire, tying down with his band of 3,500 Europeans and 12,000 native askaris and porters, a British/Imperial army 40,000 strong, which was at times commanded by the former Second Boer War commander Jan Smuts. One of his greatest victories was at the Battle of Tanga (3–5 November 1914), where von Lettow-Vorbeck beat a British force more than eight times the size of his own.

Lettow-Vorbeck's guerilla campaign compelled Britain to commit significant resources to a minor colonial theatre throughout the war and inflicted upwards of 10,000 casualties. Eventually weight of numbers, especially after forces coming from the Belgian Congo had attacked from the west (battle of Tabora) and dwindling supplies forced Lettow-Vorbeck to abandon the colony. He withdrew into Mozambique, then into Northern Rhodesia where he agreed to a ceasefire three days after the end of the war, on receiving news of the armistice between the warring nations (see Lettow-Vorbeck Memorial for details.) 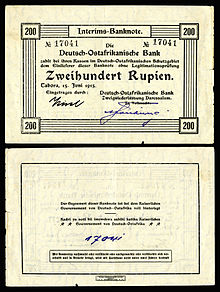 File:GEA-49-Deutsch Ostafrikanische Bank-200 Rupien (1915).jpg
A 200 German East African rupie provisional banknote issued in Dar es Salaam from 1915-17. Currency had to be printed locally due to a significant lack of provisions resulting from the naval blockade.

Lettow-Vorbeck was acclaimed after the war as one of Germany's heroes, and his Schutztruppe was celebrated as the only colonial German force in the First World War not to have been defeated in open combat (although they often retreated when outnumbered). The askari colonial troops that had fought in the East African campaign were later given pension payments by the Weimar Republic and the Federal Republic of Germany (West Germany).

The German light cruiser SMS Königsberg also fought off the coast of the African Great Lakes region. She was eventually scuttled in the Rufiji delta in July 1915 after running low on coal and spare parts, and was subsequently blockaded and bombarded by the British. The surviving crew stripped out the remaining ship's guns and mounted them on gun carriages, before joining the land forces, adding considerably to their effectiveness.

Another and smaller campaign was conducted on the shores of southern Lake Tanganyika over 1914–15. This involved a makeshift British and Belgian flotilla, and the Reichsheer garrison at Bismarckburg (modern day Kasanga).

The Treaty of Versailles

Baron Fritz Wedel Jarlsberg, Norwegian ambassador to Paris, enjoyed a high level of popularity and influence in the French capital. Through diplomacy, he had originally intended for The Treaty of Versailles to have Germany cede German East Africa to Norway for the loss of men and ships in WWI during which Norway had declared itself neutral. The liberal political party Venstre which was elected for government in Norway, opposed the conservative view on colonization and denied the offer which Jarlsberg had successfully secured in France.[11] Instead, the treaty broke up the colony, giving the north-western area to Belgium as Ruanda-Urundi, the small Kionga Triangle south of the Rovuma River to Portugal to become part of Mozambique, and the remainder to Britain, which named it Tanganyika.

Most place names in German East Africa continued to bear German spellings of the local names, such as Udjidji for Ujiji and Kilima-Ndscharo or Kilimandscharo for Mount Kilimanjaro. (Kigoma was known for a time as Rutschugi.) The few exceptions to the rule included

as well as German translations of some local phrases, such as Kleinaruscha for Arusha-Chini and Neu-Moschi for the settlement that is now known as Moshi. Lake Eyasi was known as the "Hohenlohe Sea", and the mission town of Sankt-Michael (St. Michael) near Kahama was formerly more important[citation needed].