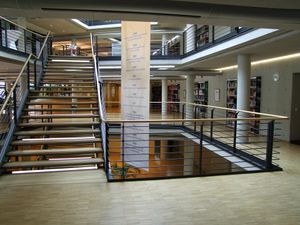 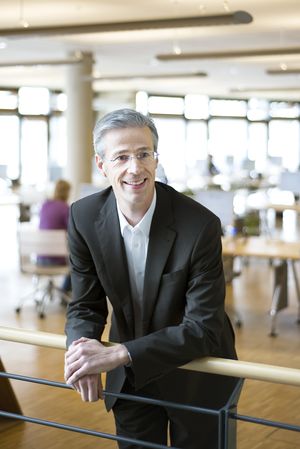 The German National Library of Economics (German: Deutsche Zentralbibliothek für Wirtschaftswissenschaften), abbreviated ZBW, is the world's largest library for economics.[2][3] It also bears the suffix "Leibniz Information Centre for Economics" and is part of the Gottfried Wilhelm Leibniz Scientific Community (WGL). The headquarters of the ZBW is in Kiel, Germany with additional offices in Hamburg.[1]

The ZBW is jointly funded by the German Federal Government and States of Germany. Its mission is to procure, index, archive and provide literature on economics and business fields to researchers and the general public. It is a depositary library of the World Trade Organization and maintains a European Union Documentation Centre at both locations.[4] It also collects all official publications of the United Nations, OECD, the International Monetary Fund and the World Bank.[5] The ZBW is headed by Klaus Tochtermann.

The ZBW has its roots in a library established in 1919 at the "Royal Institute for Maritime Traffic and World Economy" (German: Königliches Institut für Seeverkehr und Weltwirtschaft), which later became the Kiel Institute for the World Economy. The institute’s founder, Bernhard Harms, intended for the library to contribute to research in economic geography, trade politics, colonial economics and transport policy. By 1924, the collection had already reached 70,000 volumes.[6]

After the Nazi Seizure of Power in 1933, "Jewish" and social democratic workers were expelled from the Institute under the "Law for the Restoration of the Professional Civil Service." The National Socialist regime did permit the library to keep its collections and even continue the procurement of foreign literature.[7] Unlike many libraries during World War II, it did not suffer any losses thanks to the books being moved to safety into the Cathedral of Ratzeburg. As a result, in postwar-torn Germany it had a uniquely comprehensive and valuable collection. In 1966 the German Research Foundation (DFG) designated the ZBW as the central library for economics in the Federal Republic of Germany. Since 1980 it has been a member of the Leibniz Association.[6]

In 2007 the library of the Hamburg Institute of International Economics (HWWA) merged with the ZBW, creating the largest economics library and information provider in the world.[8] At the same time, the ZBW was incorporated as a foundation under public law independent of the Kiel Institute for the World Economy. Since then, the ZBW is additionally known as the "Leibniz Information Centre for Economics".[6]

The ZBW acquires theoretical and empirical literature in economics, business and related disciplines such as economics education and psychology. All economics-related literature published in Germany is purchased, as well as most of the literature from the United States and the United Kingdom. Publications from other countries are purchased selectively. One emphasis of the ZBW is to acquire all publications of the world’s leading business schools and economic research institutes. In 2014 the collection consisted of:[1]

The library's physical collection occupies nearly 80 kilometers of shelf space and 37,000 volumes are added each year.[9] Anyone may visit the library site, read journals and borrow books free of charge. Users can also access databases and electronic journals which are not freely available on the internet. Document delivery services are available to deliver books and articles directly to users' workplaces, homes, or local libraries.[10]

The ZBW is a depository library of the World Trade Organization. All WTO publications are collected and made available.[11] It is also designated a European Documentation Centre (EDC), receiving all official publications of the European Union and its organs, including the European Commission, European Central Bank (ECB) and European Court of Justice (ECJ).[12] The ZBW also collects and makes available the publications of the United Nations Organisation for Economic Co-operation and Development (OECD), the International Monetary Fund (IMF) and the World Bank.[5]

The ZBW offers EconDesk, a free reference desk that will answer short, factual economics questions via phone, email, or online chat. Questions can be about statistical data, economic definitions, or specific country information. This service is available to the public worldwide without charge.[13]

EconBiz is a search portal for economics. It aims to support research in and teaching of economics with a central entry point for all kinds of subject-specific information and direct access to full texts.[14]

ECONIS is the ZBW's online catalog of indexed economics literature. It includes title records for books, journals, papers, dissertations, statistics, and as well as subject-specific data. In 2014 ECONIS had 5.5 million datasets.[1] Over 208,000 titles in ECONIS are linked to full-text, permitting library users to access them over the internet.[15]

The ZBW operates da|ra, a service operated through the DataCite consortium, to provide Digital Object Identifier (DOI) registration for all German research centers in the fields of social sciences and economics. It also operates a comprehensive metadata schema to ensure proper citation of registered social and economic data.[2]

With its publication server EconStor the ZBW provides an infrastructure for the free publication of scholarly literature in economics and business administration. The mission of EconStor is to make research findings in economics accessible in Open Access and thus internationally visible. In addition, the ZBW produces the peer-reviewed journal Economics in cooperation with the Kiel Institute for the World Economy. The Journal is based on the principle of Open Access and Open Assessment and listed in SCCI. The ZBW is active in national and international bodies in order to foster the idea of free dissemination of research findings. Among these bodies are COAR, DINI or the Priority Initiative "Digital Information".[16]

Since 1 January 2007 the ZBW serves as editor of two economic journals:

Wirtschaftsdienst, edited by the ZBW

Wirtschaftsdienst – The Journal for Economic Policy (German: Wirtschaftsdienst – Zeitschrift für Wirtschaftspolitik) is an academic journal that has existed since 1916. It is published monthly by Springer Science+Business Media (ISSN 0043-6275) in German. The journal presents articles on current issues in German and European economic and social policy.[17]

Intereconomics, edited by the ZBW

Intereconomics – Review of European Economic Policy publishes papers dealing with economic and social policy issues in Europe. It has existed since 1966 and is one of the oldest journals covering macroeconomics. It is published bimonthly by Springer Science+Business Media (ISSN 0020-5346) in English. Since 2009 it is edited in cooperation with the Centre for European Policy Studies (CEPS) in Brussels.[18]

Important cooperation partners in other research projects include:[20]

The ZBW is a member of a variety of national and international organizations, including:[21]

As part of the German national research infrastructure, the ZBW also conducts its own applied research. Some of the more notable projects include:[22]