In World War II, Nazi Germany established brothels in the concentration camps (Lagerbordell) to create an incentive for prisoners to collaborate, although these institutions were used mostly by Kapos, "prisoner functionaries" and the criminal element, because regular inmates, penniless and emaciated, were usually too debilitated and wary of exposure to Schutzstaffel (SS) schemes. In the end, the camp brothels did not produce any noticeable increase in the prisoners’ work productivity levels, but instead, created a market for coupons among the camp VIPs.[1] The women forced into these brothels came mainly from the Ravensbrück concentration camp,[2] except for Auschwitz, which employed its own prisoners.[3] In combination with the German military brothels in World War II, it is estimated that at least 34,140 female inmates were forced to serve as prostitutes during the Third Reich.[3] 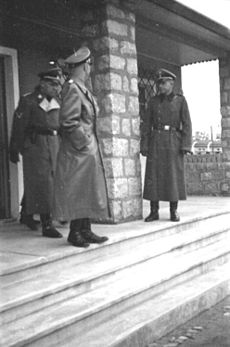 The first camp brothel was established in Mauthausen/Gusen in 1942. After 30 June 1943, a camp brothel existed in Auschwitz, and from 15 July 1943, in Buchenwald. The one in Neuengamme was established in early 1944, Dachau's in May 1944, Dora-Mittelbau's in late summer, and Sachsenhausen's on 8 August 1944.[4] There are conflicting dates for the camp brothel in Flossenbürg: one source claims summer 1943;[5] another states it was not opened until 25 March 1944.[4]

The camp brothels were usually built as barracks surrounded by a barbed-wire fence, with small individual rooms for up to 20 women prisoners, controlled by a female overseer (Aufseherin).[1] The sex workers were replaced frequently due to exhaustion and illness, and were usually sent away to their deaths later.[1] The brothels were open only in the evenings. No Jewish male prisoners were allowed as patrons. Those with access to the customer lineup (Aryan VIPs only), had to sign up for a specific day and pay two reichsmarks for a 20-minute "service" based on a predetermined schedule. The women were matched with clients by an SS-man. The market for the "prize-coupons" was routinely cornered by the common criminals who wore the green triangles (hence the "green men" denomination).[1] There is evidence (somewhat controversial)[6] that in some of the brothels, women might have had tattoos inscribed on their chests saying "Feld-Hure" (Field Whore).[7] Some of them underwent forced sterilizations as well as forced abortions, often resulting in death.[3]

The subject of camp prostitution was alluded to in survivors' memoirs at least as early as 1972, when the first edition of Heinz Heger's book[5] was published. However, the subject remained largely taboo in studies of Nazism until the mid-1990s, when new publications by female researchers broke the silence.[8][9]

Sometimes the SS enticed women into becoming sex workers by promising them better treatment or reductions of their indefinite sentence. This caused anger or envy among some female inmates. Nina Michailovna, Russian camp prisoner, reported: “When we found out that a girl in our block was chosen, we caught her and threw a blanket on her and beat her up so badly that she could hardly move. It wasn’t clear if she would recover. They just wanted to have a better life and we punished them this way.”[10]

In addition to using camp brothels as a means to control inmates, encourage collaboration, and prevent riots and escapes, Heinrich Himmler also intended them to be used as a means of teaching pink triangle prisoners "the joys of the opposite sex",[5] i.e., as "therapy" for their homosexuality. Heger claims that Himmler directed that all gay prisoners were to make compulsory visits to the camp brothel once per week as a means of curing them of their same-sex attraction.[5]

German concentration camp brothels were re-enacted in fictional Nazi exploitation films made in the 1970s such as Ilsa, She Wolf of the SS, Last Orgy of the Third Reich, Love Camp 7, SS Experiment Camp and Nazi Love Camp 27.[11] Examples of Israeli fictional literature on the subject include writer's Yehiel De-Nur alias K. Tzetnik's book The House of Dolls and Stalag fiction genre.[12][13] Czech author Arnošt Lustig wrote a novel Lovely Green Eyes (ISBN 1559706961), which tells a story of a 15-year-old Jewish girl forced to serve as a prostitute in a German camp brothel during World War II. In Australian television drama A Place to Call Home (season 2), current events bring painful memories of war for the Australian-born Jewish convert Sarah Adams. The audience learns that not only was she an internee at the Ravensbrück concentration camp, but she was forced into a camp brothel; willing herself to survive the ordeal solely because of her love for her French husband, Rene. After liberation, on being told erroneously that he'd died, she had a mental breakdown. The dramatic revelation that he was not dead, followed.[14]