From Infogalactic: the planetary knowledge core
Jump to: navigation, search
This article is about the third German cruiser to bear the name Emden. For the World War I cruisers, see SMS Emden.

Emden was a light cruiser built by the Reichsmarine in the early 1920s. She was the only ship of her class and was the first large warship built in Germany after the end of World War I. She was built at the Reichsmarinewerft in Wilhelmshaven; her keel was laid in December 1921 and her completed hull was launched in January 1925. Emden was commissioned into the German fleet in October 1925. Her design was heavily informed by the restrictions of the Treaty of Versailles and the dictates of the Allied disarmament commission. She was armed with a main battery of surplus 15 cm (5.9 in) guns left over from World War I, mounted in single gun turrets, as mandated by the Allied powers. She had a top speed of 29 knots (54 km/h; 33 mph).

Emden spent the majority of her career as a training ship; in the inter-war period, she conducted several world cruises to train naval cadets. At the outbreak of war, she laid minefields off the German coast and was damaged by a British bomber that crashed into her. She participated in the invasion of Norway in April 1940, and then resumed training duties in the Baltic Sea. These lasted with minor interruptions until September 1944, when she was deployed to Norway to serve as the flagship of the minelaying forces there. In January 1945, she carried the disinterred remains of Paul von Hindenburg from East Prussia to Pillau, to prevent his remains from falling into the hands of the advancing Soviet Army. While undergoing repairs in Kiel, Emden was badly damaged by British bombers and later run aground outside the harbor and was blown up. The wreck was ultimately broken up in 1949.

According to Article 181 of the Treaty of Versailles, the treaty that ended World War I, the German Navy was permitted only six light cruisers. Article 190 limited new cruiser designs to 6,000 long tons (6,100 t) and prohibited new construction until the vessel to be replaced was at least twenty years old.[1] Design work on the first new light cruiser, ordered as "Ersatz Niobe", began in 1921.[2] The ship was intended for long-range overseas service, so the designers placed emphasis on a large cruising radius and capacious crew accommodation spaces.[3] The designers wanted to use a main battery of eight 15-centimeter (5.9 in) guns in four dual mounts, but the Allied powers insisted on single gun turrets. This arrangement placed four guns amidships, which reduced the power of her broadside, as only six guns could fire on either side, as opposed to eight.[4]

The ship was based on cruiser designs from late in World War I, primarily due to personnel shortages in the design staff and the closure of the Navy's experimental institute. Nevertheless, the ship incorporated major advances over the earlier designs, including large-scale use of welding in her construction and a significantly more efficient propulsion system that gave her a cruising radius fifty percent larger than that of the older ships.[2] Emden was laid down at the Reichsmarinewerft in Wilhelmshaven on 8 December 1921 and launched on 7 January 1925. She was commissioned into the fleet nine months later, on 15 October 1925.[5]

The ship had a standard crew of nineteen officers and 464 enlisted men. While serving on cadet training cruises, her crew numbered twenty-nine officers and 445 enlisted, with 162 cadets. After 1940, her standard crew was increased to twenty-six officers and 556 enlisted, and after being reduced to a training ship, her crew numbered thirty officers and 653 enlisted men. Emden carried six boats. The German Navy regarded the ship as a good sea boat, with slight lee helm and gentle motion in a swell. The cruiser was maneuverable, but was slow going into a turn. Steering was controlled by a single large rudder. She lost speed only slightly in a head sea, but lost up to sixty percent in hard turns. She had a metacentric height of .79 m (2 ft 7 in).[2] 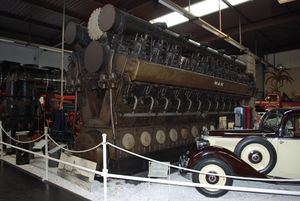 The ship's main battery was to have been eight 15 cm SK L/55 guns in twin turrets, but the Allied disarmament authority refused to permit this armament. Instead, she was equipped with existing stocks of 15 cm SK L/45 guns in single turrets.[2] The guns were C/16 models; they fired a 45 kg (99 lb) shell at a muzzle velocity of 835 meters per second (2,740 ft/s).[6] They could elevate to 40 degrees and had a maximum range of 17,600 m (57,700 ft). The eight guns were supplied with a total of 960 rounds of ammunition. Emden was also equipped with two 8.8 cm SK L/45 anti-aircraft guns, and a third was later added. These guns had between 900 and 1,200 rounds of ammunition in total. As designed, she was to have carried eight deck-mounted 50 cm (20 in) torpedo tubes in dual launchers, but only four tubes were fitted as built. In 1934, these were replaced with more powerful 53.3 cm (21.0 in) tubes. The ship carried twelve torpedoes.[2] 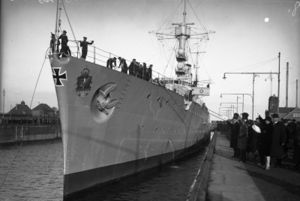 After her commissioning in 1925, Emden was used as a training ship for naval cadets. She made a series of world cruises to show the flag in the pre-war period and trained large numbers of cadets. In 1925–1926, a series of modifications were made to the ship, including increasing the height of the second funnel and the installation of a flying bridge at the base of the battle mast, which was shortened by 7 m (23 ft).[8] Lothar von Arnauld de la Perière commanded the ship from September 1928 until October 1930.[9] In April 1933, her coal-fired boilers were replaced with more efficient oil-fired boilers. The next year, another series of modifications was made, including reducing the main mast and funnels in height and the installation of a small crane on the starboard side of the main mast. In September 1934, Karl Dönitz, the future commander of the Kriegsmarine, took command of the ship and remained in the position until September 1935. Emden went into dock for further modifications in 1936; the ship's masts were again reworked, and the third 8.8 cm anti-aircraft gun was added.[8] Leopold Bürkner commanded the Emden from 30 July 1937 to 15 June 1938.[10]

After the outbreak of World War II in September 1939, a degaussing coil was installed just above the waterline to protect the ship from magnetic mines.[11] Her first wartime operation saw her participating in laying a minefield off the German coast in the North Sea on 3 September. She conducted the operation with the other light cruisers Nürnberg, Leipzig, Köln, and Königsberg and sixteen destroyers.[12] After laying her first set of mines, she returned to Wilhelmshaven to restock her mines. While moored in the harbor, she was attacked by British bombers on 4 September; German anti-aircraft gunners shot down four of the five Blenheim bombers, one of which inadvertently crashed into the ship. Twenty-nine men were killed or wounded in the crash.[13][14] 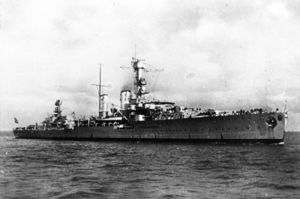 Emden steaming at low speed in 1935

Emden next participated in the invasion of Norway (Operation Weserübung). She was part of the ill-fated Kriegsschiffgruppe 5, tasked with seizing Oslo. The group's flagship, the heavy cruiser Blücher, was sunk by the Oscarsborg coastal fortress inside Oslofjord and the heavy cruiser Lützow was damaged when the squadron attempted to steam up the fjord into Oslo harbor to land troops. After the loss of Blücher, Emden and the heavy cruiser Lützow disembarked their troops further down the fjord. After the ground troops had occupied Oslo, Emden entered the port serving as a joint communications center to coordinate Kriegsmarine, Wehrmacht, and Luftwaffe operations. After the conquest of Norway was complete, Emden returned to Germany and served as a training ship. This lasted until September 1941.[15]

In September 1941, Emden was assigned to an operation in the Gulf of Riga to provide gunfire support to German troops.[16] On the 16th, she was operating off Dagö with Leipzig and three torpedo boats; the ships came under fire from Soviet coastal batteries, but were undamaged. A group of four Soviet torpedo boats also made an unsuccessful attack on the German squadron.[17] Emden was then assigned to the Baltic Fleet, centered on the newly commissioned battleship Tirpitz; the Baltic Fleet was tasked with preventing the Soviet Navy from breaking out of the Baltic. Emden and Leipzig were the core of the southern group, which was based in Libau. The fleet remained on station only briefly, and by 29 September, the ships were recalled to Gotenhafen.[18]

After returning to Germany, Emden was assigned to training duties once again. She continued in this role until June 1942, by which time a major overhaul was in order. The refit was completed in Wilhelmshaven, after which Emden returned to training cadets. In September 1944, she was deployed to Norway, where she served as the flagship of the minelaying forces there. While in Norway, she participated in several minelaying operations through October, when she was transferred to convoy escort duty; her primary task was to protect convoys in and out of Oslo. This lasted until December, when she ran aground in the Oslofjord off the island of Flateguri. Her guns were removed while repairs were partially effected in the Schichau-Werke. Before departing East Prussia, she took on the remains of Paul von Hindenburg and his wife to carry them to mainland Germany. They had been disinterred to prevent them from falling into the hands of the advancing Soviet Army. The repair work on the ship was not yet completed, and so she was towed to Pillau, where the Hindenburgs' remains were taken off.[16] Emden's engines were put back in working order, though she was incapable of reaching top speed, and her guns were reinstalled.[19]

Emden departed Pillau on 1 February, bound for Kiel. She arrived on 7 February 1945 and was taken into the Deutsche Werke dockyard to complete the necessary repairs. British bombers attacked the ship twice and damaged her badly. The ship was listing heavily, and so on 14 April, she was towed out into Heikendorfer Bay and run aground. The Germans then blew her up on 3 May to prevent the Allies from capturing the ship.[20] The wreck was ultimately broken up for scrap in 1949.[3] Her bow ornament is currently on display in the Deutsches Museum in Munich.[21]