The 2013 German federal election was held on Sunday, 22 September, to elect the members of the 18th Bundestag of Germany.[3] At stake were all 598 seats to the Bundestag, plus 33 overhang seats determined thereafter. The Christian Democratic Union/Christian Social Union (CDU/CSU) of Chancellor Angela Merkel won their best result since 1990, with nearly 42% of the vote and nearly 50% of the seats (five short for an overall majority). However, their coalition partner, the Free Democrats (FDP), failed to meet the 5% vote threshold in what was their worst showing ever in a federal election, thus denying them seats in the Bundestag for the first time in their history.

Merkel's party reached a coalition agreement with the then-main opposition party, the Social Democrats, (SPD) to form a grand coalition; the third in the country's history since World War II. The SPD leadership conducted a ratification vote by their broader membership before the agreement was made final.

In the last federal election in 2009, the Christian Democratic Union (CDU); its Bavarian sister party, the Christian Social Union (CSU); and the Free Democratic Party (FDP) won the election with Angela Merkel as Chancellor and Guido Westerwelle as Vice-Chancellor.[4]

The date of the German federal election is governed by the Basic Law for the Federal Republic of Germany (Germany's constitution) and the Federal Election Law (Bundeswahlgesetz).

Article 39 of the Basic Law states that the Bundestag shall be elected between 46 and 48 months after the beginning of the legislative period.[5] As the 17th Bundestag convened on 27 October 2009, the election was scheduled between 27 August and 27 October 2013.[6] To avoid school holidays, a date in late September is usually chosen; this made 15 or 22 September 2013 the most likely dates.[7] Indeed, the Federal President ordered 22 September 2013 to be the election day upon the recommendation of the federal government.[8]

According to Article 18 of the Basic Law for the Federal Republic of Germany, everyone over the age of eighteen is entitled to vote. The Bundestag is elected using mixed-member proportional representation and first-past-the post method. Voters have two votes: with their first they elect a member of Bundestag for their constituency, with the second they vote for a party. Subject to a party obtaining a minimum threshold vote, the overall seat assignment in the Bundestag is proportionally distributed according to the second (party) votes. A party who wins more districts in a given state than it is entitled to according to the number of party votes it received in that state keeps these "overhang" seats. A party must either win 5 percent of the vote or at least three constituency seats in order to qualify for MMP.

The other half of the Bundestag, besides the MMP section, is elected directly through a first-pass-the post electoral system. Some Germans have an issue with this system because it means that only the members that are elected in the direct method are actually held accountable to their electorate.[9] The members that are elected through the MMP section are representatives of the party, not the electorate.[9]

In 2008, some modifications to the electoral system were required under an order of the Federal Constitutional Court. The court had found a provision in the Federal Election Law by which it was possible for a party to experience a negative vote weight, thus losing seats due to more votes, violated the constitutional guarantee of the electoral system being equal and direct.[10]

The court allowed three years for these changes, so the 2009 federal election was not affected. The changes were due by 30 June 2011, but appropriate legislation was not completed by that deadline. A new electoral law was enacted in late 2011, but declared unconstitutional once again by the Federal Constitutional Court upon lawsuits from the opposition parties and a group of some 4,000 private citizens.[11]

As the CDU/CSU is the main government party, CDU chairwoman (and incumbent chancellor) Angela Merkel was not challenged as chancellor-candidate. In the SPD, the situation was a bit less clear: There were four candidates in the discussion. While Sigmar Gabriel, the party chairman, Frank-Walter Steinmeier, the parliamentary caucus leader, and Peer Steinbrück, former minister-president of Nordrhein-Westfalen and former federal minister of Finance, were quasi-official contenders for the candidacy, incumbent Nordrhein-Westfalen minister-president Hannelore Kraft denied interest in the candidacy.[16]

After taking heat domestically for bailing out other European countries, Finance Minister Wolfgang Schäuble took the step of mentioning that Greece would need a third bailout. This was in stark contrast to his colleagues who had refrained from making such measures in light of the election, it particularly followed Chancellor Angela Merkel's dismissal of a potential future bailout. In reaction to the statement and the dithering, the Social Democrats' Peer Steinbrueck said that it was "time that Mrs. Merkel tells people the truth;" while the Greens' Jürgen Trittin also criticized Merkel.[18]

Merkel also became the first chancellor to visit Dachau concentration camp after an invitation by former inmate Max Mannheimer, who leads a survivor group. She said: "What happened at the concentration camps was and continues to be incomprehensible," while also warning of a rising tide of anti-Semitism and racism as a threat to democracy in Europe. Her visit was welcomed by residents of the town due to its historic nature but was also suggested as a vote ploy ahead of the election.[19] She also campaigned on Germany's unemployment record that fell to a two-decade low during her premiership, progress towards a balanced budget and the eurozone's advantages for Germany’s exports. However, there were questions asked about her legacy and a potential heir to the party leadership.[20] Campaigning in the "hot phase"[21] ended on 21 September as Merkel appealed to voters to support her against eurosceptics.[22]

In Germany, there are regular opinion polls during the whole of the legislative period. Germany's major polling agencies are Allensbach, Emnid, Forsa, Forschungsgruppe Wahlen, GMS, Infratest dimap and INSA/YouGov. August 2013 opinion polls suggested that the CDU/CSU and FDP (black–yellow coalition) would be just short of or just above an absolute majority, rather than the SPD and Greens (red–green coalition), partners in the 1998–2005 Schröder government.[24] 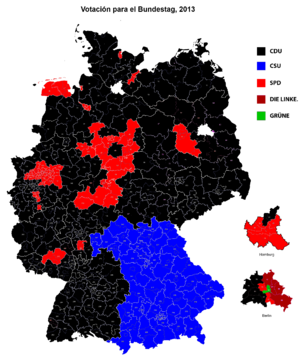 The Christian Democratic Union (CDU) and the Christian Social Union of Bavaria (CSU) scored 42 percent of the vote, their best result since tallying 44% in the 1990 election. Since some 15 percent of the vote went to parties that fell short of the 5% threshold, the CDU/CSU came up just five seats short of a majority. The Free Democratic Party (FDP), junior partner in the outgoing coalition government, failed to pass the 5% threshold. It failed to win any directly elected seats either (it has not won any directly elected seats since 1990), thus shutting it out of the Bundestag altogether for the first time in the party's history. A new eurosceptic party, the Alternative for Germany, nearly won seats but like the FDP was shut out by narrowly missing the 5% threshold.[25][26] This will also mean that only four parties will form the Bundestag for the first time since the 1987 election (CDU/CSU operate as one Bundestag group).

Merkel said: "It was a strong vote to take responsibility in Germany, but also in Europe and the world."[29] Peer Steinbrück announced his withdrawal from top politics and intends to focus on his ordinary tasks as a member of parliament.[30]

Many SPD insiders do not want to work with The Left. One day after the election, Merkel announced that she had already spoken with the SPD, but would not rule out other possibilities.[31] An opinion poll conducted shortly after the election showed that 65% of SPD members were opposed to entering a Merkel-led grand coalition,[32] however the SPD executive voted to enter coalition talks[33] with the proviso that they would seek a vote from their membership before making a final agreement on entering a coalition.[34]

Formal talks began in the first week of October when Merkel met SPD leaders on 4 October. She said: "Europe is watching us, the world is watching us. We have the common responsibility to build a stable government." She also planned to hold talks with the Greens the following week.[38] After five weeks of negotiations that culminated in an all-night session 27–28 November, the CDU/CSU reached agreement with the SPD to form a new coalition government. Issues resolved in the talks included the planned introduction of a minimum hourly wage of €8.50 in 2015 and no new taxes. The deal depended on approval by the SPD rank and file, with a poll set for 6 December.[39][40][41] On 14 December, 76% of the SPD's members voted for the coalition to go ahead. The new government under Chancellor Angela Merkel was sworn in on 17 December.[42]