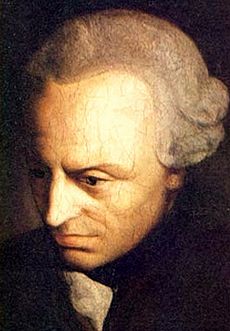 German philosophy, here taken to mean either (1) philosophy in the German language or (2) philosophy by Germans, has been extremely diverse, and central to both the analytic and continental traditions in philosophy for centuries, from Gottfried Wilhelm Leibniz through Immanuel Kant, Georg Wilhelm Friedrich Hegel, Arthur Schopenhauer, Karl Marx, Friedrich Nietzsche, Martin Heidegger and Ludwig Wittgenstein to contemporary philosophers. Søren Kierkegaard (a Danish philosopher) is frequently included in surveys of German (or Germanic) philosophy due to his extensive engagement with German thinkers.[1][2][3][4] 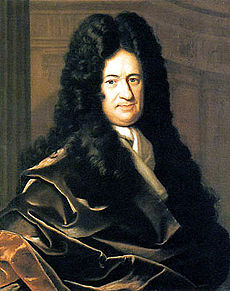 Gottfried Wilhelm Leibniz (1646–1716) was both a philosopher and a mathematician who wrote primarily in Latin and French. Leibniz, along with René Descartes and Baruch Spinoza, was one of the three great 17th century advocates of rationalism. The work of Leibniz also anticipated modern logic and analytic philosophy, but his philosophy also looks back to the scholastic tradition, in which conclusions are produced by applying reason to first principles or a priori definitions rather than to empirical evidence.

Leibniz is noted for his optimism - his Théodicée[5] tries to justify the apparent imperfections of the world by claiming that it is optimal among all possible worlds. It must be the best possible and most balanced world, because it was created by an all powerful and all knowing God, who would not choose to create an imperfect world if a better world could be known to him or possible to exist. In effect, apparent flaws that can be identified in this world must exist in every possible world, because otherwise God would have chosen to create the world that excluded those flaws.

Leibniz is also known for his theory of monads, as exposited in Monadologie. Monads are to the metaphysical realm what atoms are to the physical/phenomenal.[citation needed] They can also be compared to the corpuscles of the Mechanical Philosophy of René Descartes and others. Monads are the ultimate elements of the universe. The monads are "substantial forms of being" with the following properties: they are eternal, indecomposable, individual, subject to their own laws, un-interacting, and each reflecting the entire universe in a pre-established harmony (a historically important example of panpsychism). Monads are centers of force; substance is force, while space, matter, and motion are merely phenomenal.

Christian Wolff (1679–1754) was the most eminent German philosopher between Leibniz and Kant. His main achievement was a complete oeuvre on almost every scholarly subject of his time, displayed and unfolded according to his demonstrative-deductive, mathematical method, which perhaps represents the peak of Enlightenment rationality in Germany.

Wolff was one of the first to use German as a language of scholarly instruction and research, although he also wrote in Latin, so that an international audience could, and did, read him. A founding father of, among other fields, economics and public administration as academic disciplines, he concentrated especially in these fields, giving advice on practical matters to people in government, and stressing the professional nature of university education.

In 1781, Immanuel Kant (1724–1804) published his Critique of Pure Reason, in which he attempted to determine what we can and cannot know through the use of reason independent of all experience. Briefly, he came to the conclusion that we could come to know an external world through experience, but that what we could know about it was limited by the limited terms in which the mind can think: if we can only comprehend things in terms of cause and effect, then we can only know causes and effects. It follows from this that we can know the form of all possible experience independent of all experience, but nothing else, but we can never know the world from the “standpoint of nowhere” and therefore we can never know the world in its entirety, neither via reason nor experience.

Since the publication of his Critique, Immanuel Kant has been considered one of the greatest influences in all of western philosophy. In the late 18th and early 19th century, one direct line of influence from Kant is German Idealism. 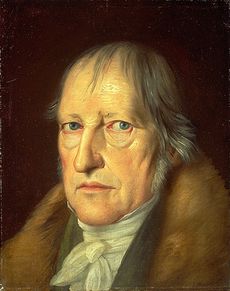 An idiosyncratic opponent of German idealism, particularly Hegel's thought, was Arthur Schopenhauer (1788 – 1860). He was influenced by Eastern philosophy, particularly Buddhism, and was known for his pessimism. Schopenhauer's most influential work, The World as Will and Representation, claimed that the world is fundamentally what we recognize in ourselves as our will. His analysis of will led him to the conclusion that emotional, physical, and sexual desires can never be fulfilled. Consequently, he eloquently described a lifestyle of negating desires, similar to the ascetic teachings of Vedanta and the Desert Fathers of early Christianity.[6]

Karl Marx and the Young Hegelians 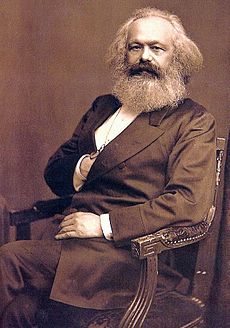 Among those influenced by Hegel was a group of young radicals called the Young Hegelians, who were unpopular because of their radical views on religion and society. They included Ludwig Feuerbach (1804–1872), Bruno Bauer (1809–1882) and Max Stirner (1806–1856) among their ranks.

Karl Marx (1818–1883) often attended their meetings. He developed an interest in Hegelianism, French socialism and British economic theory. He transformed the three into an essential work of economics called Das Kapital, which consisted of a critical economic examination of capitalism. Marxism became one of the major forces on twentieth century world history.

Neo-Kantianism refers broadly to the revival of the type of philosophy explained by Immanuel Kant and of the interpretations of Kant provided by post-Kantian philosophers such as Schopenhauer, Jakob Friedrich Fries and Johann Friedrich Herbart. Major figures in the neo-Kantian movement, which began around the 1860s, include Friedrich Albert Lange and Hermann Cohen. 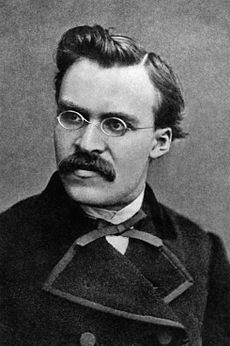 Friedrich Nietzsche (1844–1900) was initially a proponent of Schopenhauer. However, he soon came to disavow Schopenhauer's pessimistic outlook on life and sought to provide a positive philosophy. He believed this task to be urgent, as he believed a form of nihilism caused by modernity was spreading across Europe, which he summed up in the phrase "God is dead". His problem, then, was how to live a positive life considering that if you believe in God, you give in to dishonesty and cruel beliefs (e.g. divine predestination of some individuals to Hell), and if you don't believe in God, you give in to nihilism. He believed he found his solution in the concepts of the Übermensch and Eternal Return. His work continues to have a major influence on both philosophers and artists.

Frege, Wittgenstein and the Vienna Circle

In the late 19th century, the predicate logic of Gottlob Frege (1848–1925) overthrew Aristotelian logic (the dominant logic since its inception in Ancient Greece). This was the beginning of analytic philosophy. In the early part of the 20th century, a group of German and Austrian philosophers and scientists formed the Vienna Circle to promote scientific thought over Hegelian system-building, which they saw as a bad influence on intellectual thought. The group considered themselves logical positivists because they believed all knowledge is either derived through experience or arrived at through analytic statements, and they adopted the predicate logic of Frege, as well as the early work of Ludwig Wittgenstein (1889–1951) as foundations to their work. Wittgenstein did not agree with their interpretation of his philosophy.

While the seminal philosophers of twentieth-century analytical philosophy were German-speakers, most German-language philosophy of the twentieth century tends to be defined not as analytical but 'continental' philosophy – as befits Germany's position as part of the European 'continent' as opposed to the British Isles or other culturally European nations outside of Europe.

Phenomenology began at the start of the 20th century with the descriptive psychology of Franz Brentano (1838–1917), and then the transcendental phenomenology of Edmund Husserl (1859–1938). It was then transformed by Martin Heidegger (1889–1976), whose famous book Being and Time applied phenomenology to ontology, and who, along with Ludwig Wittgenstein, is considered one of the most influential philosophers of the 20th century. Phenomenology has had a large influence on Continental Philosophy, particularly existentialism and poststructuralism. Heidegger himself is often identified as an existentialist, though he would have rejected this.

Hermeneutics is the philosophical theory and practice of interpretation and understanding.

Originally hermeneutics referred to the interpretation of texts, especially religious texts.[7] In the 19th century, Friedrich Schleiermacher (1768–1834), Wilhelm Dilthey (1833–1911) and others expanded the discipline of hermeneutics beyond mere exegesis and turned it into a general humanistic discipline.[8] Schleiermacher wondered whether there could be a hermeneutics that was not a collection of pieces of ad hoc advice for the solution of specific problems with text interpretation but rather a "general hermeneutics," which dealt with the "art of understanding" as such, which pertained to the structure and function of understanding wherever it occurs. Later in the 19th century, Dilthey began to see possibilities for continuing Schleiermacher's general hermeneutics project as a "general methodology of the humanities and social sciences".[9]

In the 20th century, hermeneutics took an 'ontological turn'. Martin Heidegger's Being and Time fundamentally transformed the discipline. No longer was it conceived of as being about understanding linguistic communication, or providing a methodological basis for the human sciences - as far as Heidegger was concerned, hermeneutics is ontology, dealing with the most fundamental conditions of man's being in the world.[10] The Heideggerian conception of hermeneutics was further developed by Heidegger's pupil Hans-Georg Gadamer (1900–2002), in his book Truth and Method.

In 1923, Carl Grünberg founded the Institute for Social Research, drawing from Marxism, Freud's psychoanalysis and Weberian philosophy, which came to be known as the "Frankfurt School". Expelled by the Nazis, the school reformed again in Frankfurt after World War II. Although they drew from Marxism, they were outspoken opponents of Stalinism. Books from the group, like Adorno’s and Horkheimer’s Dialectic of Enlightenment and Adorno’s Negative Dialectics, critiqued what they saw as the failure of the Enlightenment project and the problems of modernity. Postmodernists consider the Frankfurt school to be one of their precursors.[citation needed]

Since the 1960s the Frankfurt School has been guided by Jürgen Habermas' (born 1929) work on communicative reason,[11][12] linguistic intersubjectivity and what Habermas calls "the philosophical discourse of modernity".[13]