A Gesamtkunstwerk (German pronunciation: [gə.ˈzamtˌku̇nstˌveɐ̯k], translated as total work of art,[1] ideal work of art,[2] universal artwork,[3] synthesis of the arts, comprehensive artwork, all-embracing art form or total artwork) is a work of art that makes use of all or many art forms or strives to do so. The term is a German word which has come to be accepted in English as a term in aesthetics.

The term was first used by the German writer and philosopher K. F. E. Trahndorff in an essay in 1827.[4] The German opera composer Richard Wagner used the term in two 1849 essays, and the word has become particularly associated with his aesthetic ideals. It is unclear whether Wagner knew of Trahndorff's essay.

In the twentieth century, some writers applied the term to some forms of architecture, while others have applied it to film and mass media.[5]

Some elements of opera reform, seeking a more "classical" formula, had begun at the end of the 18th century. After the lengthy domination of opera seria, and the da capo aria, a movement began to advance the librettist and the composer in relation to the singers, and to return the drama to a more intense and less moralistic focus. This movement, "reform opera" is primarily associated with Christoph Willibald Gluck and Ranieri de' Calzabigi. The themes in the operas produced by Gluck's collaborations with Calzabigi continue throughout the operas of Carl Maria von Weber, until Wagner, rejecting both the Italian bel canto tradition and the French "spectacle opera", developed his union of music, drama, theatrical effects, and occasionally dance.

However these trends had developed fortuitously, rather than in response to a specific philosophy of art; Wagner, who recognised the reforms of Gluck and admired the works of Weber, wished to consolidate his view, originally, as part of his radical social and political views of the late 1840s. Previous to Wagner, others who had expressed ideas about union of the arts, which was a familiar topic among German Romantics, as evidenced by the title of Trahndorff's essay, in which the word first occurred, "Aesthetics, or Theory of Philosophy of Art". Others who wrote on syntheses of the arts included Gottfried Lessing, Ludwig Tieck and Novalis.[6] Carl Maria von Weber's enthusiastic review of E.T.A. Hoffmann's opera Undine (1816) admired it as 'an art work complete in itself, in which partial contributions of the related and collaborating arts blend together, disappear, and, in disappearing, somehow form a new world'.[7]

Wagner used the exact term 'Gesamtkunstwerk' (which he spelt 'Gesammtkunstwerk') on only two occasions, in his 1849 essays "Art and Revolution" and "The Artwork of the Future",[8] where he speaks of his ideal of unifying all works of art via the theatre.[9] He also used in these essays many similar expressions such as 'the consummate artwork of the future' and 'the integrated drama', and frequently referred to 'Gesamtkunst'.[10] Such a work of art was to be the clearest and most profound expression of a folk legend, though abstracted from its nationalist particulars to a universal humanist fable.

Wagner felt that the Greek tragedies of Aeschylus had been the finest (though still flawed) examples so far of total artistic synthesis, but that this synthesis had subsequently been corrupted by Euripides. Wagner felt that during the rest of human history up to the present day (i.e. 1850) the arts had drifted further and further apart, resulting in such "monstrosities" as Grand Opera. Wagner felt that such works celebrated bravura singing, sensational stage effects, and meaningless plots. In "Art and Revolution" Wagner applies the term 'Gesamtkunstwerk' in the context of Greek tragedy. In "The Art-Work of the Future" he uses it to apply to his own, as yet unrealised, ideal.

In his extensive book Opera and Drama (completed in 1851) he takes these ideas further, describing in detail his idea of the union of opera and drama (later called music drama despite Wagner's disapproval of the term), in which the individual arts are subordinated to a common purpose.

Wagner's own opera cycle Der Ring des Nibelungen, and specifically its components Das Rheingold and Die Walküre represent perhaps the closest he, or anyone else, came to realising these ideals;[11] he was himself after this stage to relax his own strictures and write more 'operatically'.[12]

Some architectural writers have used the term Gesamtkunstwerk to signify circumstances where an architect is responsible for the design and/or overseeing of the building's totality: shell, accessories, furnishings, and landscape.[13] It is difficult to make a claim for when the notion of the Gesamtkunstwerk was first employed from the point of view of a building and its contents (although the term itself was not used in this context until the late 20th century); already during the Renaissance, artists such as Michelangelo saw no strict division in their tasks between architecture, interior design, sculpture, painting and even engineering. It has been argued by historian Robert L. Delevoy that Art Nouveau represented an essentially decorative trend that thus lent itself to the idea of the architectural Gesamtkunstwerk. But it equally possible it was born from social theories that arose out of a fear of the rise of industrialism.[14] 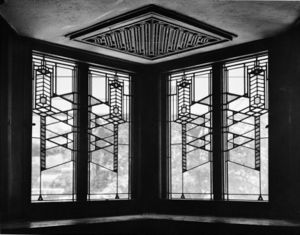 However evidence of complete interiors that typify the concept of Gesamtkunstwerk can be seen some time before the 1890s. There was an increasing trend amongst architects in the 18th and 19th centuries to control every facet of an architectural commission. As well as being responsible for just the structure they tried to extend their role to include designing (or at least vetting) every aspect of the interior work as well. This included not only the interior architectural features but was extended to the design of furniture, carpets, wallpaper, fabrics, light fixtures and door-handles. Robert Adam and Augustus Welby Pugin are examples of this trend to create an over-all harmonising effect which in some cases might even extend to the choice or design of table silver, china and glassware.

A distinctly modern approach to the concept of architectural Gesamtkunstwerk emerged with the Bauhaus school, first established in Weimar in 1919 by Walter Gropius. The school specialised in design, art and craftsmanship (architecture was not introduced as a separate course until 1927 after it had transferred to Dessau). Gropius contended that artists and architects should also be craftsmen, that they should have experience working with different materials and artistic mediums, including industrial design, clothes design and theatre and music. However, Gropius did not necessarily see a building and every aspect of its design as being the work of a single hand.[15]