The GHF (Ghana Air Force) started on 24 July 1959 as a Flying Training School with Israeli instructors and technicians. The School was established as a cradle of a service to complement the Army and the Navy. Later that year a headquarters was established in Accra under the command of Indian Air commodore Jaswant Singh who was appointed as the first Chief of Air Staff (CAS).[2] In 1960 Royal Air Force personnel took up the task of training the newly established Ghana Air Force and in 1961 they were joined by a small group of Royal Canadian Air Force personnel. In September 1961 as part of President Kwame Nkrumah's Africanization program, a Ghanaian CAS was appointed, with the first being J.E.S. de Graft-Hayford. Although born in the U.K. he was of Ghanaian descent. The Ghana Air Force was in the beginning equipped with a squadron of Chipmunk trainers, and squadrons of Beavers, Otters and Caribou transport aircraft. In addition a DH125 jet was bought for Kwame Nkrumah, Hughes helicopters were bought for mosquito spraying plus DH Doves and Herons. British-made Westland Whirlwind helicopters and a squadron of Italian-made MB-326 ground attack/trainer jets were also purchased. In 1962 the national school of gliding was set up by Hanna Reitsch, who was once Adolf Hitler's top personal pilot. Under the command of Air Commodore de Graft-Hayford, she served as director, operations instructor and trainer of the school. She also acted as the personal pilot of Kwame Nkrumah from 1962−1966.

The GHF headquarters and main transport base are located in Accra, close to Kotoka International Airport. Other GHF air bases include:

The GHF Air Force Base, Accra, came into being soon after the Royal Air Force (RAF) had taken over the administration from the Indian and Israeli Air Force officers at the beginning of 1961. The station was housed at No 3 hangar at the Accra Airport (Kotoka International Airport) with hardly any aircraft. The Unit had four main sub-units, i.e. the Administration Wing, Flying Wing, Technical Wing and Equipment Wing. The School of Technical Training was also located at this station. The Station moved from No 3 hangar to its present location in Burma Camp towards the end of 1965.[2]

The Ghana Air Force is also responsible for the co-ordination and direction of Search and Rescue (SAR) within the Accra Flight Information Region.[2] 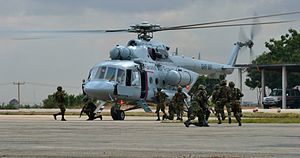 A Ghanaian special forces team board a Mi-17 helicopter 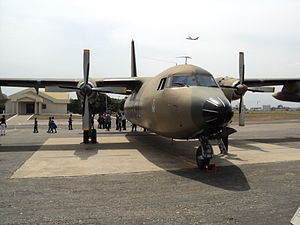 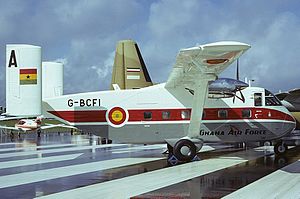 A former Short SC.7 Skyvan from the GHF

The senior appointment in the GHF is the Chief of Air Staff. The following is a list of the Ghana Air Force Chiefs of Air Staff:[9] 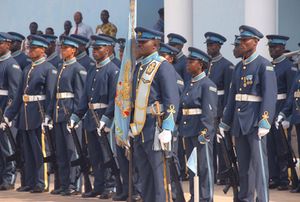 In descending order of importance the GHF officer ranks are:[14]

In descending order of importance the GHF airman ranks are:[2]