Gianteresio Vattimo (born 4 January 1936) is an Italian philosopher and politician.

Gianteresio Vattimo was born in Turin, Piedmont. He studied philosophy under the existentialist Luigi Pareyson at the University of Turin, and graduated in 1959. After studying with Karl Löwith and Hans-Georg Gadamer in Heidelberg he returned to Turin where he became assistant professor in 1964, and later full professor of Aesthetics in 1969. While remaining at Turin, becoming Professor of Theoretical Philosophy in 1982, he has been a visiting professor at a number of American Universities.

Vattimo says he was exempted from military service.[1]

After being active in the Partito Radicale, the short-lived Alleanza per Torino, and the Democrats of the Left, Vattimo joined the Party of Italian Communists. He was elected a member of the European Parliament first in 1999 and for a second mandate in 2009.

He is openly gay and an avowed Catholic "who welcomes God's death."[2]

His philosophy can be characterized as postmodern with his emphasis on "pensiero debole" (weak thought). This requires that the foundational certainties of modernity with its emphasis on objective truth founded in a rational unitary subject be relinquished for a more multi-faceted conception closer to that of the arts.

He draws on the philosophy of Martin Heidegger with his critique of foundations and the hermeneutic philosophy of his teacher Hans-Georg Gadamer. Perhaps his greatest influence though is the thought of Friedrich Nietzsche, whose "discovery of the 'lie', the discovery that alleged 'values' and metaphysical structures are just a play of forces" (1993:93) plays an important role in Vattimo's notion of "weak thought."

Vattimo rejects any notion of a transcendental structure of reason or reality that would be given once and for all. This does not imply the loss of truth, but a Heideggerean reinterpretation of truth as the opening of horizons. Such truth is deeper than propositions which are made possible by such openings. Philosophies then are always responses to contingent questions, they are 'ontologies of actuality,' a thesis that can be confirmed by the historico-cultural links of particular philosophies. For hermeneutics to be consistent with its own rejection of metaphysics, it must present itself, argues Vattimo "as the most persuasive philosophical interpretation of a situation or 'epoch'" (1997:10). To do this, Vattimo proposes a reading of hermeneutics as having a "=nihilistic=" vocation.[3]

To Vattimo, hermeneutics has become boring and vague, lacking any clear significance for philosophical problems. His answer is to insist on the nihilistic consequences of hermeneutics. The claim that "there are no facts only interpretations and this too is an interpretation" amounts to saying that hermeneutics cannot be seen as the most accurate/true description of the permanent structures of reality of human existence. Hermeneutics is not a metaphysical theory in this sense and so can only be "proved" by being presented as the response to a history of being, a history of the fabling of the world, of the weakening of structures, that is as the occurrence of nihilism.

This nihilistic reading of history involves a certain attitude towards modernity, whereby modernity is dissolved from within through a twisting, distorting radicalisation of its premises. Vattimo uses Heidegger's term Verwindung to capture this post-modern recovery from modernity.

History as a process of weakening (secularisation and disenchantment are other terms Vattimo uses) "assumes the form of a decision for non-violence" (1992:95). An ethics of communication along the lines suggested by Jürgen Habermas suffers, according to Vattimo, from finding itself in a substantially ahistorical position, while oscillating between formalism and cultural relativism (1992:117). For Vattimo it is only when hermeneutics accepts its nihilistic destiny that "it can find in 'negativity,' in dissolution as the 'destiny of Being' ... the orientating principle that enables it to realize its own original inclination for ethics whilst neither restoring metaphysics nor surrendering to the futility of a relativistic philosophy of culture" (1992:119).

In 2004, after leaving the party of the Democrats of the Left, he endorsed Marxism, reassessing positively its projectual principles and wishing for a "return" to the thought of the Trier philosopher and to a communism, rid of distorted soviet developments, which have to be dialectically overcome. Vattimo asserts the continuity of his new choices with the "weak thought," thus having changed "many of his ideas." He namely refers to a "weakened Marx,"[4] as ideological basis capable of showing the real nature of communism. The new Marxist approach, therefore, emerges as a practical development of the "weak thought" into the frame of a political perspective. His next political book, co-authored with Santiago Zabala, is Hermeneutic Communism: From Heidegger to Marx (2011).

The authors explain the book Hermeneutic Communism as follows: "Although the material published here has never been released before, there are two books that have determined the production of this text: Gianni's Ecce Comu: Come si diventa cio che si era (2007) and Santiago's The Remains of Being: Hermeneutic Ontology After Metaphysics (2009). In the former, Vattimo emphasized the political necessity of reevaluating communism; in the latter, Zabala insisted on the progressive nature of hermeneutics. Hermeneutic Communism can be considered a radical development of both."[5]

Vattimo added his name to a petition released on February 28, 2009, calling on the European Union to remove Hamas from its list of terrorist organizations and grant it full recognition as a legitimate voice of the Palestinian people.

On July 22, 2014, in response to the IDF military operation in Gaza against Hamas attacks on Israel, Vattimo said he would personally like to "shoot those bastard Zionists" and thinks Europeans should raise money "to buy Hamas some more rockets."[1] He expressed his willingness to go to Gaza and fight side by side with Hamas and asserted, when asked if he would shoot at Israelis, that:'By nature I'm non-violent, but I'd shoot at those (of them) who bomb hospitals, private clinics and children.' Vattimo added that for him these were 'pure Nazis', the state itself a Nazi state ((uno stato nazista)) perhaps somewhat worse even than Hitler because in Israel's case, they have the support of the great Western democracies.[6]

Vattimo has been accused of anti-semitism. For example, he once remarked on the Jewish control of banks saying "Let's remember that the Federal Reserve is owned by Rothschild and Rockefeller", though the Rockefeller family is not Jewish. Renzo Gattegna, the president of the Union of Italian Jewish Communities accused him of antisemitism, writing "words of hatred that don't add anything new and are accompanied by the squalid reproposal of anti-Semitic stereotypes".[7][8] Rabbi Barbara Aiello, Italy's first female rabbi accused Vattimo of antisemitism. Reacting to his statements and to others like it, the foreign ministers for Italy, France and Germany said that they condemn anti-Semitic slurs as well as violence that has occurred at pro-Palestinian demonstrations in Europe.[9] 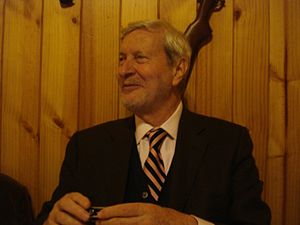