From Infogalactic: the planetary knowledge core
Jump to: navigation, search
For the Scottish journalist and historian, see Gilbert Stuart (writer).

Gilbert Stuart is widely considered to be one of America's foremost portraitists.[2] His best known work, the unfinished portrait of George Washington that is sometimes referred to as The Athenaeum, was begun in 1796 and never finished; Stuart retained the portrait and used it to paint 130 copies which he sold for $100 each. The image of George Washington featured in the painting has appeared on the United States one-dollar bill for over a century,[2] and on various U.S. Postage stamps of the 19th century and early 20th century.[3]

Throughout his career, Gilbert Stuart produced portraits of over 1,000 people, including the first six Presidents of the United States.[4] His work can be found today at art museums across the United States and the United Kingdom, most notably the Metropolitan Museum of Art and Frick Collection in New York City, the National Gallery of Art in Washington, D.C., the National Portrait Gallery, London, Worcester Art Museum in Massachusetts, and the Museum of Fine Arts in Boston.[5] 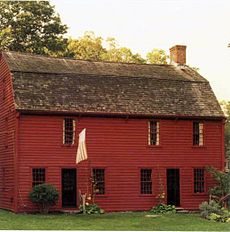 Gilbert Stuart was born in Saunderstown, Rhode Island, a village of North Kingstown, on December 3, 1755 and baptized at Old Narragansett Church on April 11, 1756.[6][7] He was the third child of Gilbert Stewart,[8] a Scottish immigrant employed in the snuff-making industry, and Elizabeth Anthony Stewart, a member of a prominent land-owning family from Middletown, Rhode Island.[4] Stuart's father worked in the first colonial snuff mill in America, which was located in the basement of the family homestead.[9]

Gilbert Stuart moved to Newport, Rhode Island at the age of six, where his father pursued work in the merchant field. In Newport, Stuart first began to show great promise as a painter.[10] In 1770, Stuart made the acquaintance of Scottish artist Cosmo Alexander, a visitor of the colonies who made portraits of local patrons and who became a tutor to Stuart.[11][12] Under the guidance of Alexander, Stuart painted the famous portrait Dr. Hunter's Spaniels, which hangs today in the Hunter House Mansion in Newport, when he was fourteen years old. The painting is also referred to as Dr. Hunter's Dogs by some accounts.[7]

In 1771 Stuart moved to Scotland with Alexander to finish his studies; however, Alexander died in Edinburgh one year later. Stuart tried to maintain a living and pursue his painting career but to no avail, and so in 1773 he returned to Newport.[13] 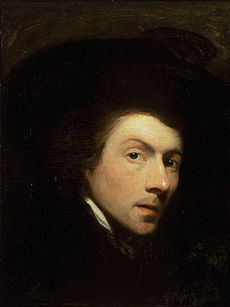 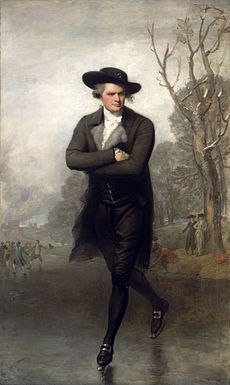 The Skater, 1782, a portrait of William Grant

Stuart's prospects as a portraitist were jeopardized by the onset of the American Revolution and its social disruptions. Following the example set by John Singleton Copley, Stuart departed for England in 1775.[14] Unsuccessful at first in pursuit of his vocation, he then became a protégé of Benjamin West, with whom he studied for the next six years. The relationship was a beneficial one, with Stuart exhibiting at the Royal Academy as early as 1777.[14]

By 1782 Stuart had met with success, largely due to acclaim for The Skater, a portrait of William Grant. It was Stuart's first full-length portrait and, according to the art historian Margaret C. S. Christman, it "belied the prevailing opinion that Stuart 'made a tolerable likeness of a face, but as to the figure, he could not get below the fifth button'".[15] Stuart said he was "suddenly lifted into fame by a single picture".[16]

At one point, the prices for his pictures were exceeded only by those of renowned English artists Joshua Reynolds and Thomas Gainsborough. Despite his many commissions, however, Stuart was habitually neglectful of finances and was in danger of being sent to debtors' prison. During this period he married Charlotte Coates. In 1787 he fled to Dublin, Ireland, where he painted and accumulated debt with equal vigor.[17]

Leaving numerous unfinished paintings behind, Stuart ended his 18-year stay in the British Isles in 1793, returning to the United States to settle briefly in New York City.[15] In 1795 he moved to Germantown, Pennsylvania, near (and now part of) Philadelphia, where he opened a studio.[18][19] It was here that he would gain not only a foothold in the art world, but lasting fame with pictures of many important Americans of the day. 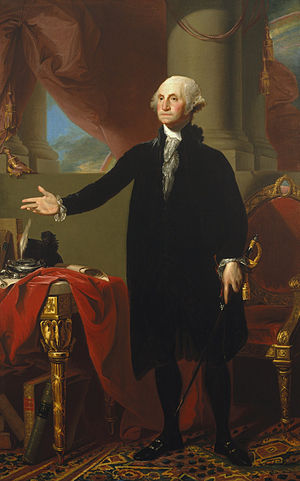 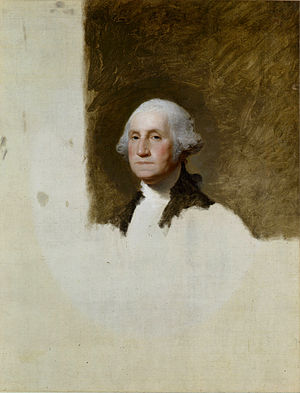 Gilbert Stuart's unfinished 1796 painting of George Washington, also known as The Athenaeum, is his most celebrated and famous work.

Stuart painted George Washington in a series of iconic portraits, each of them leading in turn to a demand for copies and keeping Stuart busy and highly paid for years.[20] The most famous and celebrated of these likenesses, known as The Athenaeum, is currently portrayed on the United States one dollar bill. Stuart, along with his daughters, painted a total of 130 reproductions of The Athenaeum. However, Stuart never completed the original version; after finishing Washington's face, the artist kept the original version to make the copies.[21] He sold up to 70 of his reproductions for a price of US$100 each, but the original portrait was left unfinished at the time of Stuart's death in 1828.[21] The painting was jointly purchased by the National Portrait Gallery and Museum of Fine Arts, Boston in 1980, and in late 2014 was on display in the National Portrait Gallery in Washington, D.C.[22][23]

Another celebrated image of Washington is the Lansdowne portrait, a large portrait with one version hanging in the East Room of the White House. During the burning of Washington by British troops in the War of 1812, this painting was saved through the intervention of First Lady Dolley Madison and Paul Jennings, one of President James Madison's slaves. Four versions of the portrait are attributed to Stuart,[24] and additional copies were painted by other artists for display in U.S. government buildings.[25] In 1803, Stuart opened a studio in Washington, D. C.[26]

Stuart moved to Boston in 1805, continuing in critical acclaim and financial troubles. He lived on Devonshire Street.[27] He exhibited works locally at Doggett's Repository[28] and Julien Hall.[29] He was sought out for advice by other artists such as John Trumbull, Thomas Sully, Washington Allston, and John Vanderlyn.[15] In 1824 he suffered a stroke, which left him partially paralyzed. Nevertheless, Stuart continued to paint for two years until his death in Boston on July 9, 1828, at the age of 72.[30] He was buried in the Old South Burial Ground of the Boston Common. As Stuart left his family deeply in debt, his wife and daughters were unable to purchase a grave site. Stuart was therefore buried in an unmarked grave which was purchased cheaply from Benjamin Howland, a local carpenter.[31]

In an effort to provide financial aid Stuart's family, the Boston Athenæum held a benefit exhibition of his works in August 1828. Over 250 portraits were lent for this critically acclaimed and well subscribed exhibition. This also marked the first public showing of Stuart's unfinished 1796 Athenæum Head portrait of Washington.[32]

When Stuart's family recovered from their financial troubles roughly ten years later, they planned to move his body to a family cemetery in Newport, Rhode Island. However, since his family could not remember the exact location of Stuart's body, it was never moved.[33]

By the end of his career, Gilbert Stuart had taken the likenesses of over one thousand American political and social figures.[34] He was praised for the vitality and naturalness of his portraits, and his subjects found his company agreeable. John Adams, for example, said:

Speaking generally, no penance is like having one's picture done. You must sit in a constrained and unnatural position, which is a trial to the temper. But I should like to sit to Stuart from the first of January to the last of December, for he lets me do just what I please, and keeps me constantly amused by his conversation.[35]

Stuart was known for working without the aid of sketches, beginning directly upon the canvas. This was very unusual for the time period. His approach is suggested by the advice he gave to his pupil Matthew Harris Jouett: "Never be sparing of colour, load your pictures, but keep your colours as separate as you can. No blending, tis destruction to clear & bea[u]tiful effect."[15]

Stuart's works can be found today at art museums and private collections throughout the United States and Great Britain, including the University Club in New York City, the Metropolitan Museum of Art in New York City, the National Gallery of Art in Washington, D.C., the National Portrait Gallery in London, and the Museum of Fine Arts in Boston.[5]

His daughter, Jane Stuart (1812–1888), also a painter, sold many of his paintings and her replicas of them from her studios in Boston and Newport, Rhode Island.[36]

A life mask of Stuart was created by John Henri Isaac Browere around 1825.[37]

Today, Stuart's birthplace in Saunderstown, Rhode Island is open to the public as the Gilbert Stuart Birthplace and Museum. The museum consists of the original house Stuart was born in, with copies of paintings from throughout his career hanging throughout the house. The museum opened in 1930.[38]

This is a partial list of portraits painted by Stuart.[39]

Gilbert Stuart's paintings of Washington, Jefferson and others have been served as models for the engravings found on dozens of U.S. Postage stamps released over the years. Washington's image from the famous Washington portrait, The Athenaeum, is probably the most noted example of Stuart's work on U.S. Postage.