American Indians inhabited the region for centuries, and extensive buffalo and pronghorn antelope herds provided ample food for the nomadic tribes. The Nakoda, Lakota and Dakota peoples alternately inhabited and claimed the region from the 16th to the late 19th centuries. In 1804 the Lewis and Clark expedition came within 15 miles of the future site of the city of Glasgow and noted the extensive herds of buffalo and various game. In 1851 the US government formed the first treaty with the Native American tribes, in 1885 the tribes engaged in the last known buffalo hunt in the region, and in 1887 a treaty was signed where the tribes surrendered 17,500,000 acres (7,100,000 ha), which led from 1888 to the formation of the Fort Peck Indian Reservation and the removal of the tribes from the Glasgow area .[citation needed]

Glasgow was founded in 1887 as a railroad town by James J. Hill, who was responsible for creating many communities along the Hi-Line. The town was named after Glasgow in Scotland.[6] Glasgow grew during the 1930s when President Franklin D. Roosevelt authorized the construction of the Fort Peck Dam, which became a major source of employment for the Glasgow area.

During World War II the Glasgow Army Airfield housed the 96th Bombardment Squadron and 614th Bombardment Squadron, flying B-17 Flying Fortresses, at different times during the war. Starting in December 1944 a German POW camp was established at the facility, lasting until the end of the war. After the war ended the base was closed, and part of the facility eventually became the present day Glasgow Airport. Glasgow was the death place of Lieutenant Colonel Ronald Speirs, famed member of Easy Company, 101st Airborne.[7]

In the 1960s the population rose to about 6,400 due to the nearby presence of the Glasgow Air Force Base, (SAC air command and housing B-52 bombers) used during the Vietnam War and the earlier part of the Cold War. A significant amount of mid-century modern and Googie-style architecture was built in Glasgow at this time, much of which survives. After the de-activation and closure of the base in 1969, Glasgow's population declined to about half its one-time size by 1990, when the loss rate stabilized.[8][9] Glasgow currently functions as the major regional administrative, shopping and services hub for Valley County and some of the areas beyond. 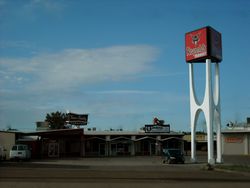 As of May 2012, the major industries present in Glasgow are retail (23% of employment), public administration (16%), construction (14%), and health care and social assistance (7%). Despite its agricultural past, farmers and farm services only took up 4% of employment. The unemployment rate is 4.4%.[15]

For Glasgow's residents aged 25 years and over, 81.5% of them attained at least a high school diploma, with 17.0% attaining at least a bachelor's degree, with 6.2% attaining a graduate or professional degree.[15]

The Scotties of Glasgow High School have won 46 Montana State Championships in their storied history. Glasgow High School currently offers twelve sports for students grades 9–12 (football, volleyball, boys and girls cross country, wrestling, boys and girls basketball, softball, boys and girls track and field, and boys and girls golf.) They have been competing at the Class B level (40 teams) in the MHSA (Montana High School Association) since the 1992–93 school year. The school is most well known for their Boys Wrestling and Girls Cross Country Programs. They have won 12 state championships and an all-class state record 30 state trophies in Boys Wrestling. They have also won an all–class state record 16 Girls Cross Country Championships.[citation needed]

The Glasgow Reds baseball team competes at the Montana American Legion Class A level (33 teams). They have two state runner-up finishes in their programs history in 2000 and 2012 and two 3rd place finishes in 1999 and 2013.

There were no reports of rape or murder occurring in Glasgow in 2010, compared with one murder the previous year, and 16 incidents of rape from 2003-2008. Overall, the crime rate to 2010 appears to be in a general downward trend, and is well below the national average.[15]

A new Sheriff's Detention Facility was completed in April 2011 at a cost of $3.16 million. The facility, located downtown, is 10,000 square feet (930 m2) and has 26 beds, replacing the 16 beds of the previous jail. The detention center houses inmates from local police and Sheriff, as well as regional inmates for agencies such as the FBI, Federal Marshall and State Police and has an average of 16 inmates on any given day.[citation needed]

There were 1,479 households of which 26.6% had children under the age of 18 living with them, 43.5% were married couples living together, 9.1% had a female householder with no husband present, 3.8% had a male householder with no wife present, and 43.6% were non-families. 39.7% of all households were made up of individuals and 19.6% had someone living alone who was 65 years of age or older. The average household size was 2.13 and the average family size was 2.85.

Glasgow is on the Hi-Line of the BNSF Railway and is served daily westbound and eastbound by Amtrak's Empire Builder route.

Glasgow is served by Glasgow Airport and has daily commercial service to Billings.

Glasgow is located on U.S. Highway 2, which is a major east-west traffic corridor of the northern Great Plains region. Montana Highway 24 passes nearby the city, a major north-south route connecting southern Montana to Canada. No Interstates run near the region.