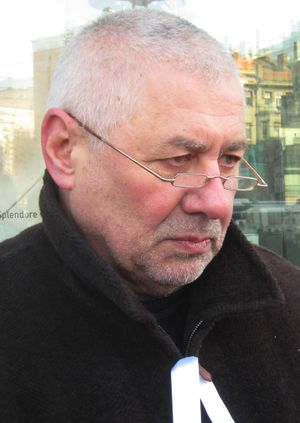 Gleb Olegovich Pavlovsky (Russian: Глеб Оле́гович Павло́вский, born 5 March 1951, Odessa) is a Russian political scientist (he describes himself as a "political technologist"). He was an adviser to the Presidential Administration of Russia until April, 2011[citation needed]. During the Soviet era, he was prosecuted as a dissident.[1]

Pavlovsky is president of the Foundation for Effective Politics (FEP).[2] In 1997, he helped create "Russian Journal", one of Russia's oldest websites.[3] Pavlovsky and FEP organized and financed many early website on the Runet, including Lenta.Ru.

From 2005 to 2008, Pavlovsky hosted the weekly television news commentary "Real Politics", which was shown on NTV Russia at 10:00 P.M. on Saturdays.

Pavlovsky was born on March 5th, 1951 in Odessa in the family of engineer. In 1968-73 he studied history at Odessa University and his first published work was in a University newspaper and was forbidden by The Politburo because of its alleged "anarchistic and left- extremist mood".

At the age of 21 Pavlovsky and friends organized a political commune "Субъект Исторической Деятельности" (Subject of Historical Action), inspired by the spirit of the 68th and its ideal of intellectual Marxism. At this stage Pavlovsky began to increase his links to the dissident movement in Odessa. In the 70s he went to Moscow to meet fellow dissidents: Mihail Gefter, Genrih Batishev, Grigory Pomerants and other associates.

As the 70s went on, Pavlovsky had cemented his place in Moscow's dissident movement and began publishing an underground newspaper entitled "Poiski", all while avoiding KGB interference. In 1982 he was arrested for anti-soviet activity and sentenced for 3 years in exile in Komi Republic. There he made a living as a house painter and stoker.

1995 — 2009— founder and president of «Фонда эффективной политики».(Foundation of Effective Politics).

1997 - co-founder and editor-en-chief of internet magazine "Russian journal". May be first Russian blog.